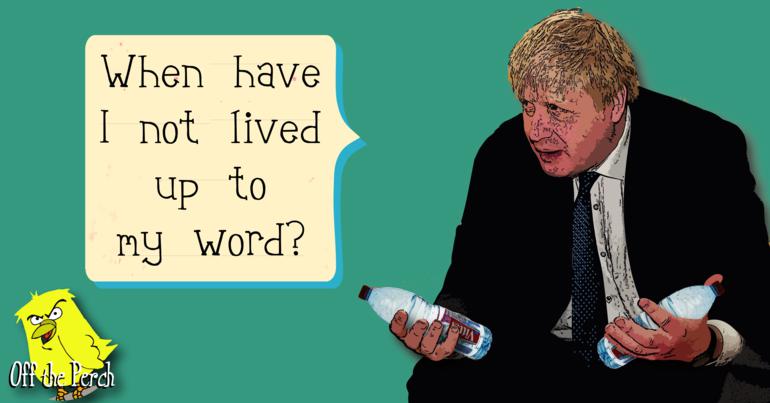 Boris Johnson has guaranteed that despite his plans for a hard/moronic Brexit, there will at least be drinking water:

"There will be drinking water, whatever happens on October 31st," says Boris Johnson.

As people in Britain are familiar with Johnson, they’ve largely all come to the same conclusion:

THERE WON’T BE ANY DRINKING WATER COME 1 NOVEMBER.

Within 27 minutes of Johnson’s statement, the entire UK had sold out of bottled water. Trying to downplay the event, Johnson said:

Truly we live in a golden age of retail. I expect things will only improve under my stewardship.

This caused shares to fall in pretty much every retail operation in the UK. Pleading with the Tory members, a spokesperson from the shop workers union said:

Why are you doing this? It’s like he had the Midas touch, but instead of gold, everything he touches turns into horseshit.

I dispute that I regurgitate manure, but while we’re on the subject, I’d like to guarantee that farmers are about to see their biggest boom since 1845.

When it was pointed out that 1845 was the year of the English-perpetrated ‘potato famine‘, Johnson laughed and said:

Oh really? I just picked a year at random. It’s funny how I’m always, always wrong about everything, don’t you think?

As you can imagine, because Johnson described this fact as “funny”, nobody else was laughing.