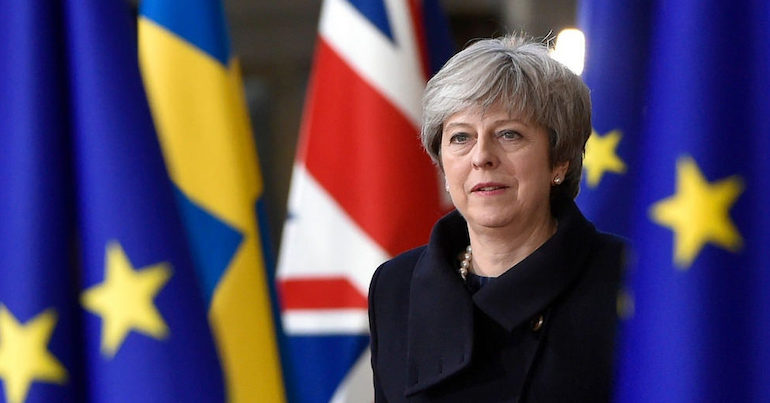 Leaked government papers revealed by the Times on 7 December indicate that Ireland will suffer “food shortages” and take “a bigger economic hit than Britain in the event of a no-deal Brexit”. But some Conservative MPs jumped on this information to ‘threaten’ Ireland with food shortages if Theresa May’s Brexit deal doesn’t go through because Ireland refuses to drop the backstop. The so-called backstop with Northern Ireland has caused concern for many parties. And it threatens to derail May’s deal.

This latest scare tactic is beyond desperate given Ireland’s history. Because between 1846 and 1851, over a million people died of starvation and disease in Ireland.

According to the Times, Ireland is “more dependent on the UK than the other way round”. The assessment showed that, because 80% of Irish goods headed to the EU pass through the UK, additional border checks “would cause challenges”. The papers also warned that “political and social damage would likely follow” a no-deal Brexit.

But disgraced former cabinet minister Priti Patel is reported in the Times to have said:

This paper appears to show the government were well aware Ireland will face significant issues in a no-deal scenario. Why hasn’t this point been pressed home during the negotiations? There is still time to go back to Brussels and get a better deal.

Threatening the Irish people seems like a move to influence the Commons Brexit vote on 11 December. Because as thejournal.ie explained, Patel implied that “these warnings should have been used as leverage against Ireland to encourage them to drop the backstop”.

Threatening Ireland in this way is as morally reprehensible as it is futile. Britain should be showing itself to be a dependable neighbour and friend in the future, and it is frightening that Brexiteers are even contemplating a move which could see stopping trade, including food supplies, being weaponised in this way, particularly given the uncomfortable historical echoes.

Brexiteers like @patel4witham say it’s leverage Britain should – and can still use.

The sheer moral bankruptcy of the Tory Brexiteers is on full display today. https://t.co/nmTQEAcVJc

Priti Patel is saying in the event of a no deal #Brexit, we must force food shortages on Ireland to make the EU drop the backstop, please someone tell me, have i read this right? This is what we're up against, the extremists will starve people to wreck our economy, #StopBrexit

Aside but one of the unexpected Brexit upshots is that most people in Ireland now realise – even if they don't know the words – that they live in a post colonial nation. This language was completely absent from Ireland I grew up in but it's now being accepted. https://t.co/bveyCVH5LZ

The issue is compounded because of An Górta Mór – the Great Hunger – a devastating period in Irish history. Over a million people died, and millions more fled abroad. Far from being a famine, many people believe it was a politically motivated and controlled situation. Many view it as a direct act of genocide by the British government against the Irish people:

A famine did not truly exist. There was no food shortage in Ireland evidenced by the fact that the British landowners continued to have a varied diet and food stuffs were exported… The starvation (and genocide) occurred as the British carried on their historical exploitation of the Irish people, failed to take appropriate action in the face of the failure of the potato crop, and maintained their racist attitude toward the Irish.

So as many people pointed out, we’ve been here before:

The Tory hard Brexiteers are now at the threatening to starve Ireland phase of their strategy. https://t.co/0cPVUW2N5W

A leading Tory Brexiteer says UK should threaten Ireland with food shortages to get it to capitulate on the Backstop.

Someone will be needing the history books out over in Whitehall.https://t.co/lEsxjcsEx2 pic.twitter.com/aQMsvLImqJ

Seizing on the leaked papers in this way is a desperate act from a desperate government to push through a flawed deal. But now, it seems to have tipped any moral decency further away than we ever thought possible.