Be careful what you wish for. If Corbyn backs a people’s vote, it could cost him Number 10. - Canary 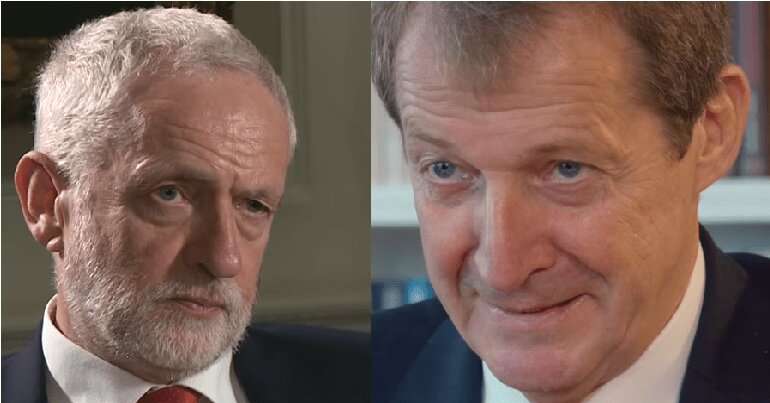 There is growing pressure for Jeremy Corbyn and Labour to back a second referendum on Brexit. And the Labour leader recently said there could be “a public vote to break the deadlock” should a general election not go ahead.

But Corbyn and other leading politicians all said the Brexit referendum would be binding. And Labour returned MPs in the 2017 general election on the promise to deliver Brexit.

In fact, joining Alastair Campbell and others favouring the status quo and overriding a public vote could cost Corbyn Number 10. Not only would it tarnish the Labour leader’s anti-establishment credentials, but it would be damaging in Labour seats – the majority of which voted Leave.

The damage would likely be much worse if Labour came out for a second referendum while the Conservatives stuck to delivering Brexit or kept quieter.

Nationally, 52% of people voted Leave. But the Leave vote is distributed differently when you look on a constituency basis. In 2017, 75% of seats the Conservatives won voted Brexit. But 61% of seats Labour won voted to Leave too. That’s probably due to Remain voters generally residing together in big cities, while Brexiteers are more dispersed.

Of course, Brexit is not the only issue most people care about. But it’s important to note that our constituency system inflates the significance of the Leave vote in a general election for both the main parties.

Millions of voters do have Brexit as a red line

It’s a different story for UKIP voters. Many of them seem to have delivering Brexit as a red line. In 2015, UKIP secured 3.5 million votes. But by the 2017 general election, UKIP had lost almost three million of them. It’s obvious what changed. Between 2015 and 2017, the UK voted to leave the EU. And because neither of the two main parties was trying to stop Brexit, UKIP fielded fewer candidates and the party’s vote plummeted.

So if Labour and the Conservatives try to stop Brexit, that risks a swing back to UKIP of potentially millions of votes in the next general election. On the flip side, the main party delivering Brexit can build on the post-referendum former UKIP vote.

Labour could win some of those 67 seats in another general election. After decades of failed free-market dogma, the anti-establishment zeitgeist seen across the world from the US to Brazil to Italy and here in the UK saw Labour win the traditional Conservative seat of Kensington in 2017.

If Corbyn goes back on the referendum result, that will kneecap the opportunity.

We already have an insight into how backing a second referendum could play out. In 2017, the Conservatives won a historic 13 seats in Scotland – mostly from the SNP. Scottish Conservative leader Ruth Davidson’s campaign diverged from May, but her strategy still had to deliver Brexit as a key pillar. Besides, ultimately, May would be Scotland’s prime minister too, and her flagship attack line was rallying against anyone trying to “frustrate” Brexit. For Labour, that fell flat because they were very much on board with honouring the referendum result; whereas the SNP went the opposite way, with a manifesto including a de facto second referendum on Brexit.

The SNP manifesto promised another vote on Scottish Independence at the end of the Brexit negotiation process. Of course, whether voting Scots are unionist or pro-independence is a big factor at play here. But voters’ positions on Brexit had a significant impact on the swing to the Conservatives as well. Research from the University of Manchester shows that 40% of pro-independence Scots who voted Brexit deserted the SNP in the 2017 election. The academics concluded that many SNP voters were “driven away by the party’s strong pro-Remain stance”.

So May’s key attack line about “frustrating” Brexit seems to have resonated among the 38% of Scotland that voted to leave. May’s party won more seats in Scotland than they returned from Margaret Thatcher’s 1983 landslide. In 10 out of the 13 seats the Tories gained, the Leave vote was higher than Scotland’s national average, with two seats outright voting to Leave.

And as shadow chancellor John McDonnell suggested on 29 November that another referendum may go ahead, May again accused Labour of trying to “frustrate” the referendum result.

The leadership should steer clear of a second referendum

Strategically, the Labour leadership shouldn’t be talking about another referendum. If May loses the vote on her deal, Labour should remain adamant that there must be a general election. Establishment fear of a Corbyn-led government is not a legitimate excuse not to have one. That leaves the onus on the Conservatives to choose between an election, a second referendum, or a renegotiation (there will never be an outright no-deal situation) – all of which are damaging to the governing party.

It’s understandable that ardent Remain voters may feel exasperated that Corbyn isn’t supporting a second referendum. But Labour’s anti-racism, industrial strategy, and an appeal to democracy should keep them on board. ‘Betrayed’ former UKIP voters, meanwhile, will likely opt for the Conservatives if that’s the main party delivering Brexit – or they’ll go back to UKIP.

Labour is also performing well in constituencies where people feel disenfranchised. In 2017, 16 out of the 20 seats with the lowest turnout voted Labour. And respecting Brexit gives the party the opportunity to unite the anti-establishment vote in the next election. Siding with the ruling class, meanwhile, would be very dangerous.