The Liberal Democrats have been touting themselves as the alternative for anyone who wants to Remain. Having revealed their position, however, it… err… doesn’t look any different from Labour’s? 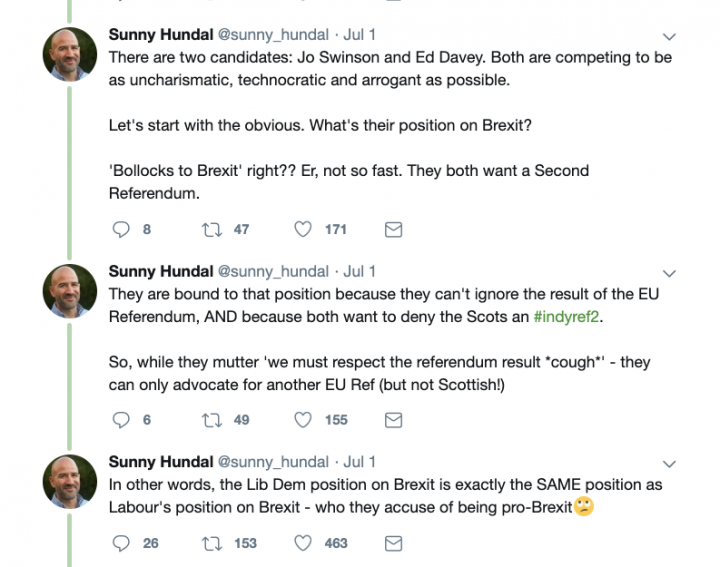 Look, if you're going to tell me the Lib Dems have a *very* different position to Labour on Brexit, then tell me what it is. Other than a Second Referendum (also a Labour position!) – what are they advocating for?

Ignoring the Referendum result? No. Revoking A50? No. 🤷🏽‍♂️

But there must be some difference, right? Well, yes. According to one inside source, the Lib Dems’ policy does have considerably more bollocks in it.

I basically just went through Labour’s proposal and added ‘bollocks to’ before every instance of the word ‘Brexit’. I wondered if this might be a bit cynical – you know – claiming to have a unique position on Brexit when actually we didn’t have anything. Then I remembered we don’t have good answers for any problem, so it’s con Remainers or nothing.

Their policy isn’t exclusively word play, however. The Lib Dems’ Brexit manifesto also features pictures of a rowdy Vince Cable giving the finger to several prominent Brexiteers. When asked if this macho Remainerism was a suitable replacement for having an actual plan, Cable smacked us in the head and downed another Leffe.

To be fair to the Lib Dems, it does make sense for them to cling to this one issue. They literally have nothing else. When voters realise they don’t even have this to offer, it probably won’t go well for them.