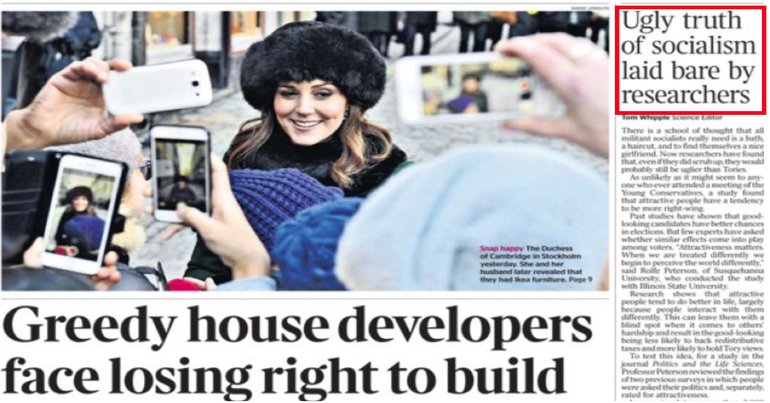 The front page of today’s Times newspaper carries the ‘news’ that socialists are ‘uglier than Tories.’ Next time you hear an establishment media journalist waxing lyrical about their fine profession, you might want to refer them to this.

Too nice to be pretty

Tom Whipple is Science Editor for the Murdoch-owned Times newspaper. Judging by this piece, his remit involves sexing up scientific papers, in order to bag a spot on the front page. In this case, the work of Rolfe Peterson, a Professor at Susquehanna University. Entitled ‘Ugly truth of socialism laid bare by researchers’, Whipple’s report states that according to science, socialists are uglier than Tories. He writes:

Or, put another way, if Karl Marx had had a better beard, would 20th-century history have been rather different?

But in true Murdochian style, Whipple waits until the final line to point out that Professor Peterson refutes this interpretation of the study. He writes [paywall]:

Although Professor Peterson said this did not prove that looks determined politics, he maintained it would be wrong to say looks were unimportant.

In other words, in marginals, don’t ignore the ugly vote.

Thankfully, people did sit up and take notice.

Murdoch’s once respected @thetimes has become a right wing version of @vizcomic!

Today’s front page: “There is a school of thought that all militant socialists really need is a bath, a haircut, & to find themselves a nice girlfriend”.#StopFundingHatehttps://t.co/6t5qLZMuOr

This is what has happened to the @TheTimes A once worthy and sensible newspaper is now churning out Daily Mail articles, saying Tories are better looking. Beyond sad. https://t.co/q2W4Gr40hA

The UK media, almost wholly-owned by six [pdf, p6] billionaires, has put a lot of time and money into stigmatising sharing. That’s why for the past 30 years, any one to the left of Thatcher opened all their political conversations with “I’m not a socialist, but…”. And why the UK media recoiled in horror at the Corbyn project and set out to kill it in its crib.

Whipple’s front page story is more of the same. Not only are lefties limp-wristed, kale-munching, terrorist sympathisers. They’re ugly too.

What’s particularly sad about this piece, is that it overlooks a big lesson we could learn from the study. Namely, that being in possession of (any) social privilege can make a person less able to empathise with those who are not. And that can lead them to vote for conservative parties, which tend to favour maintaining privilege over challenging it. That often prefer punishment over rehabilitation. And of course, who view the welfare system as a wafer-thin safety net of which only the most desperate, innocent souls are worthy. While socialists tend to see the welfare state as a bedrock of functioning society. And believe that creating better conditions for everyone, from cradle to grave, benefits us all. And frankly, couldn’t give two shits whether conservatives or socialists are considered better looking.

Featured image via The Times