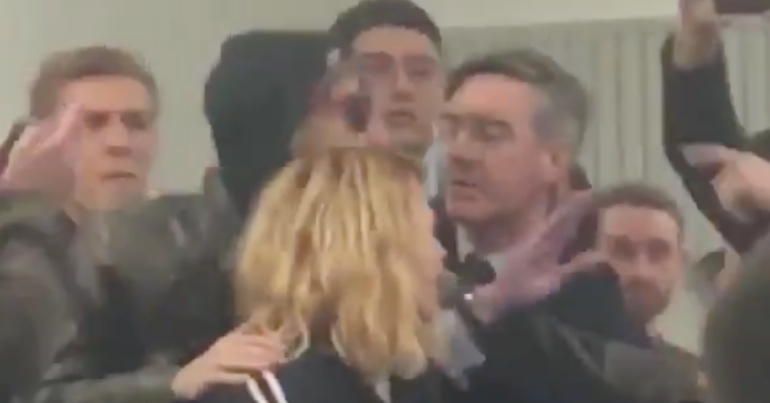 Protesters disrupted Jacob Rees-Mogg as he attempted to give a talk at the University of the West of England (UWE) on 2 February. The protest has been widely condemned by the university and politicians from all political parties. But protesters deserve our support. And in a year we are celebrating the suffragettes, who frequently disrupted politicians speaking, we should remember our history and the importance of such protests.

Protesters from Bristol Antifascists say they disrupted the talk because of Rees-Mogg’s “homophobic and anti abortion beliefs” and his voting record on welfare issues. Rees-Mogg went to the back of the hall to speak to the protesters. According to eyewitnesses, intervention from audience members led to a scuffle breaking out. Bristol Antifascists stated:

As anti fascists, feminists and people who partake in the class struggle we felt that it was appropriate of us to disrupt his speech. We barged in started chanting, and within a matter of minutes a member of the audience became aggressive towards us… more people joined in, trying to kick us out pushing and shouting at us…

BBC  journalist James Craig was present at the event. He said:

Rather than halting the event, or ignoring them, Mr Rees-Mogg walked up to the back of the theatre to try and talk them down.

At that point, various other members of the audience got involved, leading to the scuffle which happened.

How many times do the hard-right & far-right have to watch this before grasping that a Jacob Rees-Mogg supporter, enraged by dissent, hit a young woman in the face. The ensuing scuffle was to prevent HIM from battering her again or harming other people pic.twitter.com/BMkOd87J3P

The university condemned the protesters’ actions:

We support the democratic right of free speech & peaceful protest. However, we strongly condemn the actions of protesters who disrupted normal debate &behaved in this way. We are delighted Mr Rees Mogg was able to debate with our legitimate student body in a respectful manner 3/4

This year, we celebrate the suffragettes as we mark the centenary of women’s right to vote. But the fundamental motto of the suffragettes was “deeds, not words“, meaning taking direct action. And targets of these actions included political meetings and politicians.

In fact, the suffragettes’ militant campaign for votes began with disrupting a meeting in 1905 where Sir Edward Grey, a Liberal politician, was speaking.

We are living in an age where Conservative austerity policies are contributing to the deaths of people. And Theresa May could cling onto power until 2022 with her zombie government. We need more protests. We need to be disruptive. And we need to show politicians like Rees-Mogg that they will be challenged. In celebrating the suffragettes, we need to remember that it was their direct action tactics that helped win the vote for women.

So let’s support protest and come together to oppose racism, homophobia and austerity. It couldn’t be more important. People’s lives may depend on our success.