Britain is sleepwalking into 1984, and we need to wake up. Now. [OPINION] - The Canary 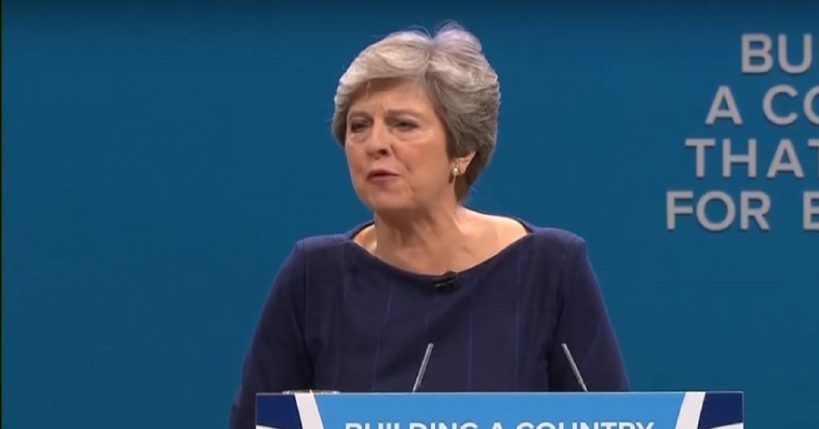 With every year of Tory rule that passes, Britain sleepwalks further and further into George Orwell’s 1984. And we need to wake up – before it’s too late.

Theresa May’s government has not only helped to make Britain one of Earth’s most advanced surveillance states. It has also been cosying up to authoritarian allies abroad, both diplomatically and ideologically. And one of the most worrying tactics which seems to be catching on is the smearing of all opponents as ‘terrorists’ – a tactic that Adolf Hitler once used to consolidate his own power and justify suspending the right to privacy and free speech.

In the run-up to the 2017 general election, the pro-Tory media tried to smear Labour Party leader Jeremy Corbyn as a terrorist sympathiser. These claims were baseless. But this was nothing new. In 2015, for example, former prime minister David Cameron referred to Corbyn and his supporters as “terrorist sympathisers” during a smear campaign against anti-war activists. (There was less media mention in 2017 of Theresa May’s own grubby deal with a party backed by terrorists, though, of course.)

Now, Theresa May is pursuing a proposal that’s both pointless and dangerous. She has promised a consultation “on making it an offence in law to intimidate candidates”. And while the offence wouldn’t cover any behaviours that aren’t already illegal, one lawyer has said it would likely have a “chilling effect on free speech around elections”.

War is peace
Freedom is slavery
Ignorance is strength

And this back-to-front world is far from fictitious. Anti-apartheid legend Nelson Mandela, for example, remained on the US terrorism watch list until 2008. The University of Colorado’s Prof Ira Chernus, meanwhile, says that Martin Luther King Jr. would “probably be charged with domestic terrorism” in the post-9/11 US for his vehement opposition to his country’s war crimes in Vietnam. People like “mass murderer” Henry Kissinger (an infamous architect of war), on the other hand, still walk free.

Britain’s modern allies abroad, meanwhile, use the word ‘terrorism’ so liberally that it begins to lose all meaning…

Turkey’s current government, for example, has reportedly: forged an alliance with neo-Nazis; turned Turkey into “the world’s biggest prison for the media profession”; organised massacres and destruction in majority-Kurdish cities and towns; helped jihadi groups in Syria; and cracked down on human rights at home. But it still has the cheek to arrest its democratically elected left-wing opponents “on trumped-up charges of terrorism” and treat international observers with contempt and abuse.

Elsewhere, controversial Israeli politician Oren Hazan has claimed that “a slap is terrorism”. He was responding to Palestinian teenager Ahed Tamimi slapping Israeli officials who were outside her home in the occupied West Bank; an act that came after an Israeli soldier had shot her 15-year-old cousin Mohammed in the face. Hazan also said that, if he’d been near Tamimi that day, “she would finish in the hospital… I would kick, kick her face”.

Renowned human rights abuser Saudi Arabia, meanwhile, has defined “calling for atheist thought in any form” a terrorist act. But spreading the ideology behind Daesh (Isis/Isil) around the world for decades is apparently fine. As is dropping bombs on countless Yemeni civilians.

Resisting fascism isn’t terrorism. It never has been. It never will be.

A billionaire Donald Trump supporter recently accused Stanford University’s Prof David Palumbo-Liu of setting up an “organization [that is] undeniably a chapter of a terrorist group”. As Palumbo-Liu explains in The Guardian:

The organization I belong to is called the Campus Antifascist Network. We advocate for organized resistance to fascist violence on campus, and for educating our communities and others as to the nature of fascism today… [The group has] responded to the steady rise of a well-funded rightwing campaign on college campuses. We do not – and never would – advocate – for initiating violence.

Across the world, right-wing groups and governments are increasingly using this kind of absurd linguistic gymnastics to smear peace activists as terrorists.

Back in the UK, police have raided a family home, apparently thinking that attending a new year celebration was a terrorist activity. An 18-year-old from London, meanwhile, went to prison on terrorism offences for wanting to fight against Daesh. Authorities also unsuccessfully brought charges against a young man simply for possessing reading material which could be useful for terrorists. The wider context was that he had travelled to northern Syria to support the Kurdish-led People’s Protection Units (YPG), which are leading the fight against Daesh while defending a progressive feminist experiment in direct democracy. And today, there are signs that UK authorities are looking to prosecute other volunteers who have fought with the YPG against Daesh.

War is war. Peace is peace.

The Tories and their allies have got it all wrong. War is war, and peace is peace. The heroes aren’t the people who trade in war, imprison their citizens, or crack down on freedom of speech. The heroes are the ones who expose and stand up to state and non-state terror in equal measure. And if we want to escape the nonsensical authoritarian nightmare of 1984, we need to identify the real terrorists – and we need to make a stand. Before it’s too late.