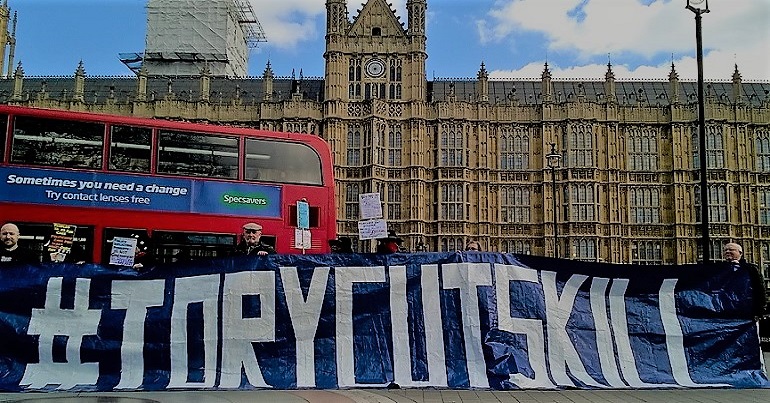 Secretary of State for Work and Pensions Esther McVey was recently forced to step down from the advisory board of the Samaritans. But now people have noticed that another mental health charity has a Conservative MP on its advisory board.

‘Crusading’ for or against disabled people’s human rights?

Johnny Mercer is the MP for Plymouth Moor View. Elected in 2015, he has spoken out about living with mental health problems and said in his maiden speech that he was on a “crusade” to improve mental health provision:

It is not good enough to have sympathy, empathy even, or simply to understand these issues when they affect someone close to us. It is time to get this right and I look forward to starting this crusade in Plymouth.

He also sits on the advisory board of the Money and Mental Health Policy Institute, which is led by ‘Money Saving Expert’ Martin Lewis. The institute describes itself as:

An independent charity, committed to breaking the link between financial difficulty and mental health problems.

But unfortunately, for many disabled people living with mental health issues, Mercer’s party has caused much of their distress. And the MP’s voting record shows he has repeatedly voted for his government’s cuts and welfare reforms.

In the name of austerity

Successive Conservative-led governments have carried out numerous welfare reforms and cuts to benefits in the name of austerity.

For example, between October 2013 and October 2016, when people living on the Disability Living Allowance (DLA) were reassessed for the Personal Independence Payment (PIP), 47% of them either lost money or had their benefit stopped.

Then, the UN said the government must “repeal” changes made to PIP in 2017, which stripped 164,000 people living with mental health issues of money; an argument the High Court agreed with just before Christmas, and one the DWP has now backed down on.

Between December 2011 and February 2014, nearly 90 people a month were dying after the Department for Work and Pensions (DWP) told them they were fit for work. And 590 cases of people taking their own lives have been linked to the Work Capability Assessment.

In the past 20 months, there have been five international reports into successive Conservative-led governments. And all of them have been scathing about the treatment of disabled people.

One UN committee accused the government of committing “grave” and “systematic” violations of disabled people’s human rights. It noted that welfare reforms had caused “high levels of stress, anxiety and depression”, leading to “financial hardship”.

In August 2017, another UN committee said that the government had created a “human catastrophe” for disabled people, condemning the UK’s attempts to misrepresent the impact of policies through “unanswered questions”, “misused statistics”, and a “smoke screen of statements”.

And on 24 January this year, another report said that many welfare benefits – including Employment and Support Allowance (ESA) – were “manifestly inadequate”. That is, people were not getting enough money to live on and were being left in poverty.

But despite all of this, the Money and Mental Health Policy Institute thinks it’s acceptable to put a Conservative MP on its advisory board. It has also listed him as a speaker at an event on 20 February, although the institute would not confirm his attendance to The Canary. One disabled person noted:

Thus an active member of a govt engaged in ongoing abuses of people with MH issues is not an appropriate person to be on a panel for Money and Mental Health that says it is 'Minimising financial harm caused by mental health crisis' https://t.co/vvsKnT91Dg

Thus the govt is an ONGOING human rights abuser. Johnny Mercer's voting records shows he is a loyal MP in supporting these abuses pic.twitter.com/zwQbIQl9tZ

Mental health problems and financial issues can be devastating, as our research rooted in the lived experience of 5,000 people with mental health problems shows. To create real change, we have to win hearts and minds across the board regardless of party loyalties or none. As a charity, we will continue to reach out to those who want to work with us to put the links between mental health and money under the spotlight.

It is a sad indictment of the third sector that a mental health charity feels it can work with an MP from a party accused of human rights abuses. But if the Samaritans thought it was acceptable to have Esther McVey on its advisory board, then anything is possible.