It's only the legendary Dennis Skinner's birthday today. So here are his 'best bits'. [VIDEO] - The Canary 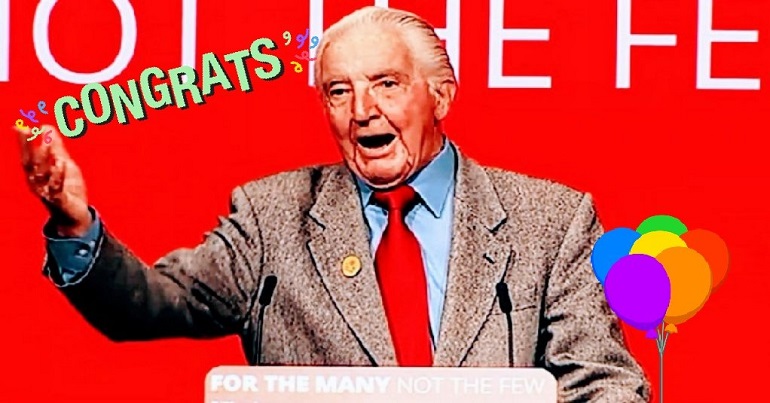 Sunday 11 February marks Labour MP for Bolsover Dennis Skinner’s 86th birthday. So to wish him a very Canary Happy Birthday, here are some of ‘The Beast’s’ finest moments.

Skinner was first elected in Bolsover in 1970, making him the longest continuously serving MP in parliament.

And while this might give him something to cheer about, Skinner disagreed. At Prime Minister’s Questions (PMQs) on 7 February, the Speaker, John Bercow, announced it was his birthday on Sunday. But the Labour MP noted he doesn’t celebrate “things like that”.

But there are some of Skinner’s moments that are too good not to celebrate.

The Queen and Tesco…?

For starters, there was his impassioned speech at the 2017 Labour Party conference. Skinner gave a blistering seven minute tirade, covering everything from Brexit to borrowing, to Jeremy Corbyn and the Queen. Perhaps the best bit was when he noted that, under Corbyn, the Labour Party was “alive and well and kicking”. But Skinner also advocated more borrowing for Labour Party spending. He said:

When the private sector expands, where do you think they get the money from? They borrow it… And they don’t take it out of their own safe. When Tesco’s expands, do you think for a minute they go to a Tesco’s safe and get the money out? Of course they don’t. They go in somebody else’s safe…

Skinner’s talk of borrowing to invest unsettled some within the party, especially so-called ‘moderates’. But unsettling people is what he does best. And he did it with aplomb to a journalist in September 2017, at the same conference.

As The Canary reported at the time:

After the Labour MP questioned Bennett over the media’s reporting of the NHS, he rounded off the exchange by saying:

You’re vain, conceited, you believe that nobody should argue with you.

Yes! When you say it’s not your business, that’s what you’re saying. You’re fired!

But the Beast of Bolsover has a habit of irritating mainstream journalists. Not least with this video bombing from July 2017:

Here’s what happens when you ask the Shadow Chancellor for a solution to the BA strike, and Dennis Skinner MP is behind him: pic.twitter.com/h6oO98dIHJ

But it’s Skinner’s defence of ordinary people which may have kept him elected for so long. A good example of this was during  PMQs in October 2017. Skinner waded into the debate around allegations from residents that a fracking company had contaminated their drinking water:

Skinner’s finest moments, though, are often his skewering of Prime Ministers. And one such occasion happened in November 2017. The Labour MP laid a bit of a trap for Theresa May over the controversial HS2 project, which left her being laughed at by MPs from across the House:

We salute you, Skinner!

There are lots more ‘best bits’ from the veteran Labour MP; too many to list here. But, whatever your politics, most people would agree that in some way, shape or form Skinner is one of the most infamous and formidable politicians of our time. The Canary salutes you, Dennis! Here’s to another glorious year socking it to the Conservative Party.