A man is screaming out for the NHS to help him. But no one seems to be listening. [VIDEO] - Canary 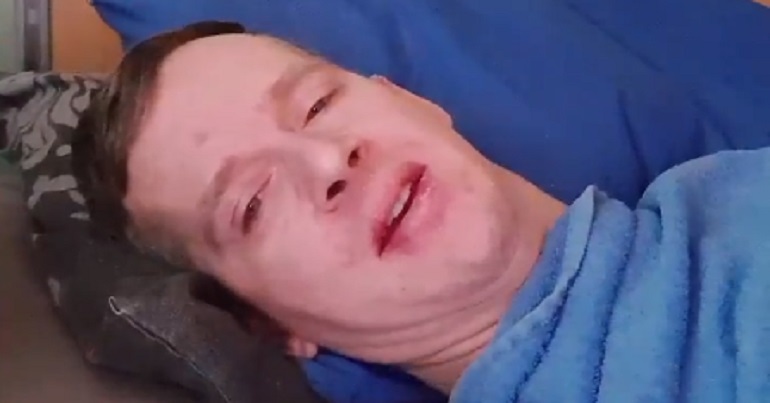 A disabled Manchester man who is having a crisis with his most basic personal support has asked The Canary to tell his story; hoping the NHS will intervene in his situation. Because a combination of failings in his care has, at one point, left him confined to his bed for nearly three weeks.

But his story paints a bigger picture. And it’s one of cuts to services, the fragmentation of the NHS, privatisation and zero-hours contracts.

In 2011, Ben Wimbush, 40, was paralysed from the chest down after a trampolining accident, leaving him living with tetraplegia. He is already battling with Manchester University NHS Foundation Trust to get an appropriate wheelchair. This is because the one he currently has leaves him in extreme pain and with open pressure sores.

But now he is having to fight for the most basic support from the NHS. A Twitter video drew The Canary‘s attention to Ben’s situation. It explains what’s going on:

So, The Canary spoke to Ben about his situation.

Manchester Health and Care Commissioning (HCC), a joint operation between Manchester City Council and the NHS, provide his support package. It originally gave him two support workers for four hours a day. But last year HCC told Ben it would need to reduce his package. And it left him with two support workers for four hours every other day. He initially agreed to this as HCC told him it would be a “temporary measure”, “if it worked” for him. But it was then that things started to go downhill.

The agency I use promised it could cover my care package. But since taking over the contract a year ago it hasn’t. It became obvious just prior to Christmas that there were issues, so I reported it to Manchester HCC who did nothing. I then reported it again in January and twice in the past week. Now its response is ‘what would I like to do about the agency?’ My response? ‘Hold them to account’, which never seems to happen.

This level of support is not enough to cover Ben’s personal care needs. But this is not the worst of it.

Ben says that because the agency uses zero-hours contracts, too often he only has one support worker:

I should have two support workers for something like a bowel routine. But they’re doing it regularly with one. Any complications with this routine could leave me with a punctured bowel.

The carers I’ve got are good. Yes, mistakes have been made but if the same staff regularly supported me it improves training. I’ve got a couple of very experienced members of staff, so they would be able to pass on their ‘pearls of wisdom’ during my four hour sessions. But it’s never happening. So they’re expecting new members of staff to pick up a brand new routine and remember every single little detail. When something as simple as wiping my bum with the wrong type of flannel can then put me in bed for two to three weeks, it’s not good enough. And that’s exactly what’s just happened.

Ben has recently been confined to his bed, with an open wound that could have turned septic, for three weeks. This was due to support workers incorrectly doing his personal care.

Inconsistent support doesn’t just affect his physical health, but his mental wellbeing too. Ben says that due to the stripped-back care visits, he’s unable to use his Functional Electronic Stimulation bike, a piece of equipment that electrically stimulates his muscles by simulating cycling. It gives him cardiovascular exercise but also helps the clinical depression he lives with. He says that without regular exercise his mental health diminishes.

But Ben is clear on the reasons why the care agency is a mess: zero-hours contracts.

He says that because all the support workers are on zero-hours contracts, they often refuse to do certain shifts. Or they take better paid work with another firm, leaving his agency unable to provide him with full support. Ben says he spoke to the agency on Tuesday 6 February. And it told him it could not cover his support for the next few weeks. He noted that:

The agency has to beg their staff to turn up; it can no longer say you must be here at such a time on this day. It has to say to staff ‘are you available to help us out?’ and that’s a massive change in culture.

He also claims to have seen an internal agency email. And he said it warned staff it was at “full capacity” and it had no contingency plans for staff sickness.

But Ben points to broader problems with the whole system:

People talk about the Tories privatising the NHS. I’ve been disabled for six years. In that time, no NHS care workers have ever been to my home; unless you count district nurses which I don’t. They all work for third party agencies. So the idea that privatisation hasn’t happened already for disabled people is a fucking joke.

Funding is definitely at the root of this as well. But it can’t be denied that healthcare staff and nurses have worked out, that for greater flexibility in their own lives, they’re better off with agencies. And I don’t blame them.

Essentially the tail is now wagging the dog. Agency staff use it to their advantage; the system is no longer working and they’re running rings around managers both within a hospital environment and the community. But it leaves people like me in a position where I’m now in bed potentially up to three weeks.

He also noted of the NHS as a whole:

Yes, there are inefficiencies. And yes, there’s people stuck in jobs in the NHS who know the system isn’t working. But it’s so close to their retirement they can’t be fucked to rock the boat. Every NHS department is giving a lower standard of service than when I had my accident six years ago.

Bad things happen when good people stand by and do nothing. And that’s exactly what’s been unfolding within the care industry. That’s why we’ve all got a fight like hell. We must make sure the Tories don’t do this to the entire system.

The NHS is something we should be incredibly proud of. I’m not a political animal. But I’ve come to the conclusion that the Tories don’t feel like that about it. Or if they do they got a very funny way of showing it. It’s is no coincidence that Jeremy Hunt is now Cockney rhyming slang for a lady garden.

And Ben said since three Clinical Commissioning Groups (CCGs) in Manchester merged [pdf] into one last year the service is in “disarray” and has become a “complete joke”. He says HCC told him it is not responsible for emergency care situations. And it has still has not provided him with a personal health budget. Plus, he says, HCC does not deal with social services, so he has no input from them either.

A spokesperson for Manchester HCC told The Canary:

We can’t comment on an individual, their case or circumstances. However, in general, if an issue is raised with us we always investigate.

But Ben has made repeated phone calls and sent numerous emails. And Manchester HCC did promise someone would get back to him. So far he has heard nothing from the commissioning body.

Ben is a fighter though, and despite his personal challenges he is campaigning to improve the lives of others. He is behind the #20isplenty project, a social media campaign to encourage people to do 20 minutes of exercise a day; for both their physical and mental health. He said #20isplenty is not only about exercise but also includes taking 20 minutes a day to relax and 20 minutes a day to eat well and socialise with other people.

And Ben is also running his #AteWithAMate campaign. He says the idea is a simple one:

I want people to think about eating with others as often as possible. It’s a great chance to talk and check our loved ones, friends even colleagues are OK. Simply share a picture and tag in whoever your eating with #AteWithaMate to show, ultimately, that #MentalHealthMatters.

Ultimately, Ben wants the NHS to give him the support he is entitled to. His case is a damning example of the state of social care, precarious employment and an NHS struggling to cope with demand. It is also a testament to how disability doesn’t discriminate, as any of us could end up in Ben’s position.

But it also shows the determination of a man; one who full of humour and a sense of purpose, not letting the system beat him down. Ben is, and should be, an inspiration to us all.

– Support Ben’s #20isplenty and #AteWithAMate campaigns and also like his Facebook page which raises awareness of spinal cord injuries. And donate to his crowdfunder for a new wheelchair.