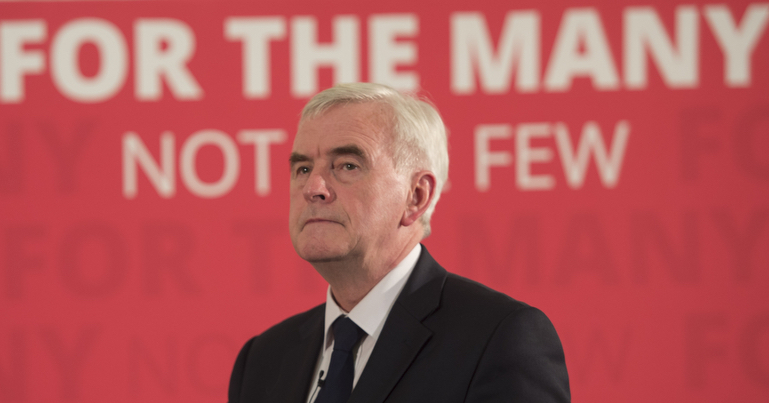 John McDonnell opened Labour’s Alternative Models of Ownership conference in London on 10 February. And ahead of the speech, he explained how our current economic system is “rigged in favour of a wealthy elite”. But he offered solutions: a “new approach”. And he’s shown exactly why he should be our next Chancellor.

Our economy is rigged in favour of a wealthy elite. Labour will put it back in the hands of the many, not the few. pic.twitter.com/dSnunJKdOr

As The Canary previously reported, the collapse of Carillion highlighted the dangers of corporate greed. Because as McDonnell said this has:

Exposed the failings of relying on the private sector to deliver our public services. The blinkered obsession with the markets that big business can run everything better.

But this, he explained, is “the old way”.

McDonnell proposed a “new approach” for the economy. He explained that “Tories bury their head in the sand” in response to the significant challenges posed by “increased automation of work and the threat of catastrophic climate change”.

How much will this ‘new approach’ cost? According to McDonnell, “absolutely nothing”.

In the 2017 general election, Labour released a report [pdf] called Alternative Models of Ownership which supports the fully costed economic model outlined in their manifesto. The report pinpoints [pdf, p5] that:

The predominance of private property ownership has led to a lack of long-term investment and declining rates of productivity, undermined democracy, left regions of the country economically forgotten, and contributed to increasing levels inequality and financial insecurity.

So one of the key solutions is a return to public ownership, because [pdf, p5] “Alternative forms of ownership can fundamentally address these problems”. At the conference, McDonnell said:

Public ownership is not just a political decision, it’s an economic necessity.

“In the hands of workers”

McDonnell also emphasised the importance of key services – the NHS, transport, housing and utilities – returning to public ownership. He said:

The next Labour government will put democratically owned and managed public services irreversibly in the hands of workers, and of those who rely on their work.

And McDonnell said this approach to public services is vital “not only because it’s right” and “the most efficient way of running them”, but also to offer long-term protection and “for everyone to have and feel ownership of them”.

But what is also significant, is a promise that under Labour these changes would be permanent to ensure:

that they can never again be taken away.

And Labour has a solution to ensure this happens. McDonnell said:

We want to see more co-operatives where businesses are run collectively and democratically by workers.

As the report explains [pdf, p11], co-operatives are “based on the values of self-help, self-responsibility, democracy, equality, equity and solidarity” and workers “have direct ownership and control”.

And we urgently need an economic model based on cooperation. Because under the Conservatives, austerity is forcing too many into poverty as profits soar for the few. At the same time privatisation is pushing the NHS into crisis. Meanwhile, landlords profit while homelessness is rising.

Enough is enough: it’s time to take back control. And McDonnell is proposing a way to do exactly that.