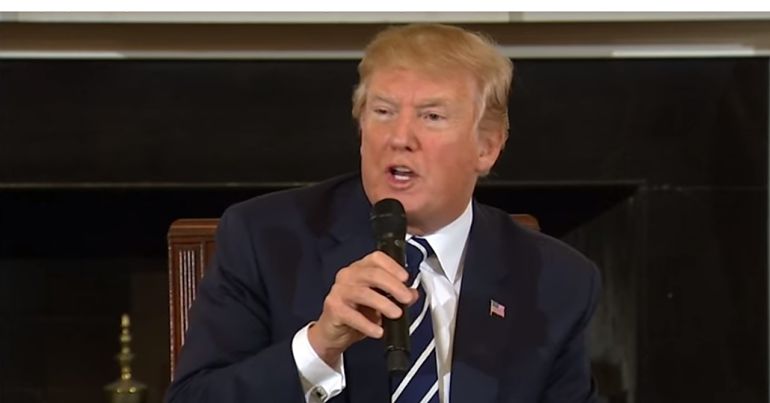 Set against the tragedy of a school shooting, it seems almost trite to point out yet again the extraordinary shortcomings of President Trump. But, like a moth to a flame, the unprecedented POTUS has used the appalling situation to demonstrate his complete unsuitability for any sort of public office.

With the rest of the world screaming in frustration at the US to sort itself out, Trump allowed himself to think aloud. Musing that the best way to address the problem of school shootings would be to stop them being officially gun-free zones, Trump proposed allowing “teachers and coaches” to carry concealed firearms. But he pre-empted any talk of free-for-alls by pointing out that these would only be people “very adept at using firearms”.

Maybe this idea was spoon-fed to Trump by the gun lobby. Maybe it just flitted into the space between his ears while he was coming down the back nine at Mar-a-Lago. Or maybe he was binge-watching one of those old TV westerns where the merest wave of a good guy’s gun is enough to despatch the baddie in a pleasingly bloodless and uncomplicated way.

However the notion got into his head, that’s where it should have stayed. A misguided but decent president might have aired it in a private meeting with advisors. But being both misguided and manifestly not decent, Trump blurted it out in an audience with survivors and bereaved relatives of last week’s atrocity.

Aside from the crass opportunism, there’s so much wrong about Trump’s proposal that it’s hard to know where to begin. But I’ll start with a point made by a friend of mine, himself a teacher. Given the number of attacks committed by young people, he suggests “Trump is considering asking teachers to shoot kids”.

The argument that a good guy with a gun can stop a bad guy with a gun presupposes not only that the good guy is quicker on the draw, but also that it’s clear who the bad guy is. In the UK, for example, it’s pretty obvious that someone walking down the street with a piece stuffed into their waistband is a wrong ‘un. Trump wants us to believe that among hundreds or thousands of people on a school campus, dozens of whom may be carrying guns, it’ll be easy to spot the villain. Presumably he’ll be wearing a black hat.

The stark lesson already staring the US in the face is that even trained and supposedly “adept” armed personnel in the police have a shocking record of shooting innocent people. In the current fevered and fearful atmosphere in US schools, how many ‘accidents’ would happen due to panic or misidentification?

The US has around 300 million guns in private ownership. In 2016, over 11,000 people died by gunshot (murder and manslaughter). The country’s relevant, but by no means unique, history of frontier trail-blazing and forcible ethnic cleansing has allowed a gun culture to develop that won’t disappear overnight. Powerful commercial forces now dominate the debate. Even school safety fears have been successfully monetised with the market for education sector security worth $2.68bn in 2017. The people now clamouring for change – many of them schoolchildren themselves – face an uphill struggle.

But change must come. And it feels as if there’s an urgency to the calls that goes beyond what we’ve seen before. While Trump may be the gun lobby’s man in the White House, he’s also a high-profile example of the rank stupidity of the gun cause. With each ill-conceived pronouncement, he unwittingly chips away at the foundations of gun-owning America.

Maybe he’ll turn out to be the president under whose tenure gun worship finally becomes unacceptable.