The homelessness minister is ignorant of what's driving homelessness. So we've set her straight. - The Canary 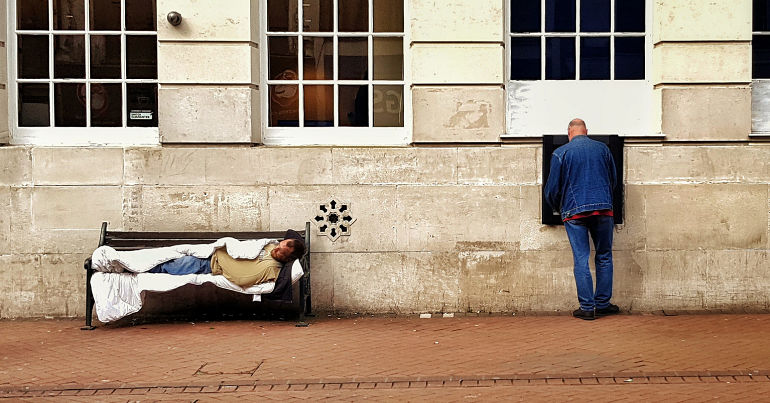 Homelessness is increasing. Under this government’s rule, the number of people rough sleeping has grown by 169% while the number of households living in temporary accommodation has risen by 73%. And these statistics do not even take into account the reported rise in ‘hidden homelessness’.

Homelessness minister Heather Wheeler, however, has stated that she doesn’t know what this increase is down to. And she believes that Conservative cuts to council budgets and welfare reforms aren’t to blame.

But homelessness, in its many forms, is not a random phenomenon. It does not come and go like the tides of the sea. There is a common theme between those who struggle to stay afloat in Tory Britain. Poverty.

Poverty is the key factor

Prof Suzanne Fitzpatrick has demonstrated that, rather than homelessness being like the losing prize in a Rawlsian raffle, childhood poverty is the most powerful indicator that an adult will become homeless. Her study revealed that:

a mixed-ethnicity lone mother who was poor as a child, renting at age 26, who has experienced unemployment, has a predicted probability of homelessness of 71.2% by age 30. Contrast this with a white male university graduate from a relatively affluent background in the rural south of England, living with his parents at age 26, where it is a mere 0.6% by the same age.

Fitzpatrick concludes that, for some groups, the possibility of becoming homeless is so high that it “comes close to constituting a norm”, whereas others are cushioned to such an extent that it’s “slight in the extreme”.

The housing crisis is racist

Homelessness also disproportionately affects Black, Asian and ethnic minority (BAME) people. Research by Kevin Gulliver in 2016 found [pdf, p46] that, in the UK, 19% of those who recognise themselves as white are believed to be in poverty, compared to 36% of those who identify as BAME. These households accounted for [pdf, p39] more than 1 in 3 statutory homeless acceptances in England in 2015/16. This is despite BAME people compromising only [pdf, p39] one seventh of the population. These statistics do not even include the large number of foreign rough sleepers who are ineligible for housing assistance.

Private landlords evicting tenants is now by far the biggest cause of homelessness in the UK. This inequality is cyclical as families with no option but to rent privately spend huge proportions of their income on rent and struggle to save.

Having no financial cushion only serves to breed discomfort.

The value of work

In his 1933 tale of poverty and destitution, Down and Out in Paris and London, George Orwell wrote that:

In practice nobody cares whether work is useful or useless, productive or parasitic; the sole thing demanded is that it shall be profitable … money has become the grand test of virtue.

85 years on, the Conservative government has gobbled up this idea and vomited its remains across the UK. The DWP has attacked those out of work, massively reducing welfare spending to, as Esther Mcvey put it, “end the something for nothing culture”. Its cuts to vital social security payments like housing benefit have tipped many over the edge.

But this government has gone further. Its squeeze on public sector pay means key workers like teachers and ambulance staff are now over £5,000 worse off per year in real terms than they were in 2010.

This means that tales of teachers sleeping in cramped emergency accommodation should not come as a surprise. Research by Shelter suggests that 41% of homeless households are in work.

On the question of why beggars are despised by many, Orwell wrote that:

He has not, more than most people, sold his honour; he has merely made the mistake of choosing a trade at which it is impossible to grow rich.

In Conservative Britain, more and more people are forced down this ‘career path’. This government’s squeeze on benefits and pay has made poverty an irreversible fact of life for many.

Homelessness is not just a housing issue, or a drugs issue, or a social care issue, or a mental health issue. It is the child of poverty. The only hope for this undignified offspring is to change its parent for the better.

Wheeler has claimed that she is “totally confident” she will not have to act on her pledge to resign if rough sleeping hasn’t halved by 2022 and been eradicated by 2027.

With such a basic and arrogant understanding of the issue, she might be out of a job a lot sooner than she thinks.