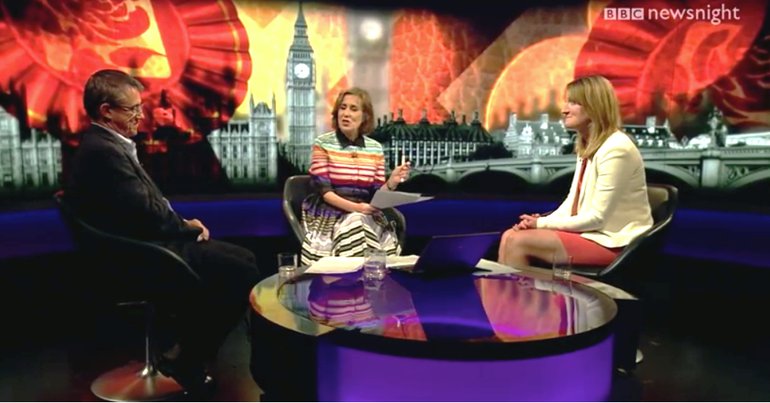 This week, the BBC cleared itself of any wrongdoing for presenting the leader of the opposition as a Russian stooge. But viewers remain unsatisfied with the show’s tone and approach to covering Jeremy Corbyn. And archive footage shows how presenters and guests reacted on-air to news that Corbyn might win the Labour leadership election in 2015. The contempt began there.

Just before going to air on 21 July 2015, news broke about the election. It turned out that ‘joke’ candidate Jeremy Corbyn was a country mile ahead. Presenter Kirsty Wark, Newsnight political editor Allegra Stratton, and former Blair advisor John McTernan giggled over the news. When Stratton tells McTernan that it must be “scary” for Labour, McTernan responds by condemning “the moronic MPs who nominated Jeremy Corbyn to have a debate”. This refers to the MPs who gave Corbyn the minimum party nominations required to stand in the election. He continues:

They should be ashamed of themselves… They’re morons, right.

While the three continue to chuckle, Wark suggests maybe there are Labour activists and voters who like Corbyn. McTernan responds:

The segment is a reminder of the contempt held in establishment circles for left-wing views and those who share them. Corbynism is the 21st-century version of democratic socialism; the ideology that brought us the NHS, universal education, workers’ rights, and the welfare state. It is a school of political thought that made a vast contribution to Britain and the world. Yet BBC Newsnight treats him like a candidate from the Monster Raving Loony Party.

Ever since, the BBC and other broadcasters have failed to temper this underlying contempt. Of course, the reaction from establishment media is that ‘Corbyn fans’ can’t handle any criticism. Nonsense. The job of any news organisation is to hold power to account and put every political leader’s plans for the country under scrutiny. But as repeated studies show, the media is acting as an attack dog rather than a watchdog when it comes to Corbyn.

It’s unhealthy to dismiss anyone to the left of Tony Blair as part of a supposed ‘Corbyn cult’, rather than accepting they hold legitimate and proven political views. It’s dangerous for democracy, which at its core is a battle of ideas. This means there might be more than one idea with some merit behind it.