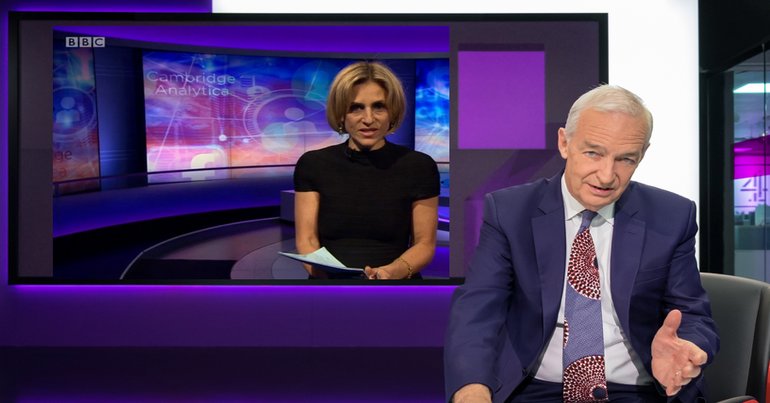 The Channel 4 News team has made public comments criticising BBC Newsnight‘s coverage of the Cambridge Analytica scandal. It’s rare for journalists to make such strident comments for public consumption, which points to the gravity of the mistake by the BBC.

Carole Cadwalladr of The Observer has been working on the Cambridge Analytica story for over a year. She gained access to whistleblowers from Facebook and Cambridge Analytica who revealed a major political scandal. The company used the illegally obtained Facebook data of hundreds of millions of people to micro-target political ads for Donald Trump and the Brexit Leave campaign. The firm has also been linked to Conservative election campaigns in the UK.

OMG!!!! ? ? ? Daily Mail caught boasting just 3 months before the Snap General Election that Theresa May and the Tories were plotting with Cambridge Analytica to “mine huge amounts of data on voters” #wato pic.twitter.com/64Vx3mlrcj

But it was the Channel 4 News team which brought the scandal explosively alive, by deploying a sting operation against the firm. Posing as potential clients, the undercover team filmed Cambridge Analytica boss Alexander Nix bragging about the scam. Both Cadwalladr and the Channel 4 News team deserve credit for extraordinary journalism.

BBC Newsnight agreed to record a ‘rebuttal’ interview with Nix, which aired after the Channel 4 News exposé.

“I think that their undercover sting was intended to embarrass us… by presenting a mischaracterisation of the facts” – Cambridge Analytica boss Alexander Nix on Channel 4’s undercover investigation #newsnight pic.twitter.com/PSQj1MKTxZ

There is nothing wrong with this in principle. Nix and Cambridge Analytica have the right of reply and rebuttal. That’s balance. However, Newsnight filmed the interview with Nix before the Channel 4 News piece aired. This meant it was filmed before Nix was aware of what he was rebutting. It also meant that Nix faced no challenge from the BBC during his rebuttal. As the Newsnight team hadn’t seen the Channel 4 News footage, they were unable to put the relevant questions to him.

It did not take long for members of the Channel 4 News team to respond to the BBC. Nor did they mince their words. Veteran broadcaster Jon Snow criticised the move, saying:

Cambridge Analytica's Mr Nix fails to address any of our findings about what his company has been doing with our Facebook profiles – Not least because he insisted on being interviewed by the BBC Before our report had aired..hence none of our findings were put to him!!

He was joined by presenter Krishnan Guru-Murthy, and editor Ben de Pear.

To be clear : He said this without seeing any of the #c4news #CambridgeAnalyticaUncovered film and used the BBC to get a rebuttal out before they had seen it either so they couldn't ask him about what he'd been secretly filmed saying. Not a bad media strategy – anyone fooled? https://t.co/PfA2AUnVjg

Why did you interview him before watching the report @BBCNewsnight ? You couldnt have known what to ask https://t.co/Q0IRWpPGQP

V weird watching @BBCNewsnight interview discussing what might be in @Channel4News #CambridgeAnalyticalUncovered before it’s aired – 3.5 hours after it has & giving him freedom to counter detailed allegations already aired & seen- time capsule news

By permitting Nix to record his rebuttal before knowing the accusations against him, BBC Newsnight has confused the matter. The programme failed to ensure it could put the appropriate questions to Cambridge Analytica. This turned an attempt at balance into a whitewashing opportunity for Nix. In doing so, BBC Newsnight undermined the painstaking work of the Channel 4 News team. No wonder it’s kicking off.

– Make a complaint about the BBC Newsnight coverage here.