The US left should ditch the Democrats — and join them - Canary 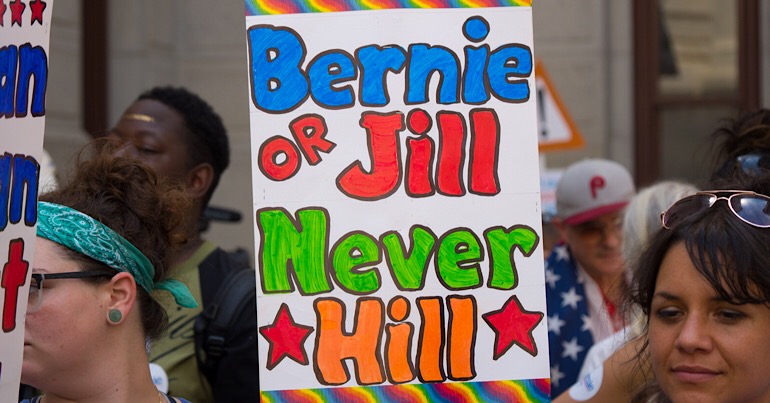 As we head into the 2018 midterms, the US left remains divided on an important question: what to do about the Democrats? Should we stick with the party or try to form a new one?

Both options, #DemEnter and #DemExit, offer strong opportunities for growth, but both have serious drawbacks. Only a combined strategy – working within the Democratic Party where necessary and outside the party where possible – offers the best hope of seeing a strong left in the US.

Who are the players?

Since the Bernie Sanders campaign in 2016 brought new life to the left, activists have founded several organizations trying to make their mark on electoral politics.

In 2016, Sanders himself started the most well-known of these groups: Our Revolution. Headed by Nina Turner, the group helps train and fund progressive candidates from the local level on up.

While it has mostly endorsed Democrats, the group also backed Cheri Honkala, a former Green Party vice-presidential nominee who ran for the Pennsylvania state legislature.

Meanwhile, another major group has focused its efforts on electing left-leaning Democrats. Founded by two independent progressive media figures, Cenk Uygur of The Young Turks and Kyle Kulinski of Secular Talk, Justice Democrats aims to get rid of every corporate-backed Democrat in Congress.

Justice Democrats has endorsed dozens of candidates in 2018 primary elections around the country. Three sitting members of Congress — Ro Khanna of California, Raúl Grijalva of Arizona and Pramila Jayapal of Washington — have signed onto the Justice Democrats caucus.

Voters should have the FIRST say and the FINAL say on who should be the candidate to run in the general elections, not the people sitting behind a desk in Washington DC. That's called a DEMOCRACY.https://t.co/4dh8K9WUr6

A third group, the Movement for a People’s Party (MPP), wants to bypass the two parties and form a new left party. Founded by Nick Braña, who served as national political outreach coordinator for the Bernie Sanders presidential campaign, MPP initially focused on pressuring Sanders to lead the party.

Unfortunately for Braña’s efforts, Sanders hasn’t shown any public support for the idea. So instead, the group is working to form a coalition with other leftist groups like the Democratic Socialists of America and existing left political parties like the Green Party.

We won’t get a new major party anytime soon

The US political system makes it especially tough to form a new major party. While third parties have always existed in the country, they’ve rarely made more than local or regional impact.

The way America votes, termed plurality, makes it difficult for a grassroots party to get more than a small number of votes.

Over time, the parties have used this to their advantage, passing laws that make the already difficult nearly impossible.

Independent and third party candidates must collect large numbers of signatures to appear on the ballot. Especially in a presidential race, they must also reach a relatively large minimum support level to enter debates with the major party candidates.

As if that weren’t enough, campaigns cost a lot of money. It’s difficult to get support without campaign staff, signs, buttons, television ads, and money for travel.

Reforming the Democrats won’t be easy

While these problems would cause many to abandon independent politics, reforming the Democratic Party won’t be a walk in the park either.

Many state parties have resisted progressive reform efforts, even in Democratic strongholds like California.

The left can win – here’s how

Independents can go from the local to the state and even national level, as Bernie Sanders’ rise has shown.

But this takes time and isn’t a sure bet. Sanders was first elected mayor of Burlington, Vermont, nearly 40 years ago and faced serious opposition from both parties along the way.

To overcome these problems, leftists need sympathetic elected officials and a groundswell of public support for electoral reform. Whatever the problems of the Democratic Party, it’s the only vehicle we have to get there at the national level.

An independent in the White House, even if he runs as a Democrat, would be a huge national win for independents.

Sanders can use the persuasive power of the presidency to speak out and encourage the kinds of electoral reforms in the states that would ensure those coming behind him won’t be forced to run as a Democrat to win.

In the voting space, no one should be treated like second-class citizens. It's time to open primaries to Independent voters @BernieSanders

Studying the past is the key to victory in the present

Some lessons from history show why a social democratic approach only within the Democratic Party won’t ensure the changes we need, though. The party has no history of overt support for socialism, and the leadership is no longer committed to even social democracy.

During the Great Depression, Franklin Roosevelt and the New Deal Democrats put pressure on establishment politicians and business leaders to move toward a more economically inclusive society.

Roosevelt’s policies and the growing labor movement in the United States helped create a broad middle class and pull large numbers of people out of poverty.

But Roosevelt wasn’t a socialist. He never tried to change the basic relationship between employer and employee. He only managed to use the power of a large tax on the wealthy to redistribute wealth to the poor.

People of color did not reap as much benefit from those programs, though – a fact Dr. Martin Luther King later tried to fix with his Poor People’s Campaign. But King was assassinated before the Poor People’s Campaign got off the ground. And the campaign failed to achieve most of its ambitious goals.

The empire strikes back

Barely more than a decade later, Ronald Reagan’s election as president marked a shift away from social democracy. Reagan set the tone, moving both parties toward a more hands-off economic approach and more corporate-friendly policies and tax structures. In the post-Reagan era, even Democrats like Bill Clinton found themselves putting the final nails in the coffin of the New Deal.

If social democracy can’t keep capitalists from reasserting power, and if the failures of capitalism produce right-wing populism, what is the left to do?

We need a mass socialist movement to counter these problems, and we can start building that from the ground up through a stronger labor movement and worker-ownership.

Amazing photo of Arizona Teachers who are striking for more funding for their schools. #RedForEd pic.twitter.com/WuvYZjtTou