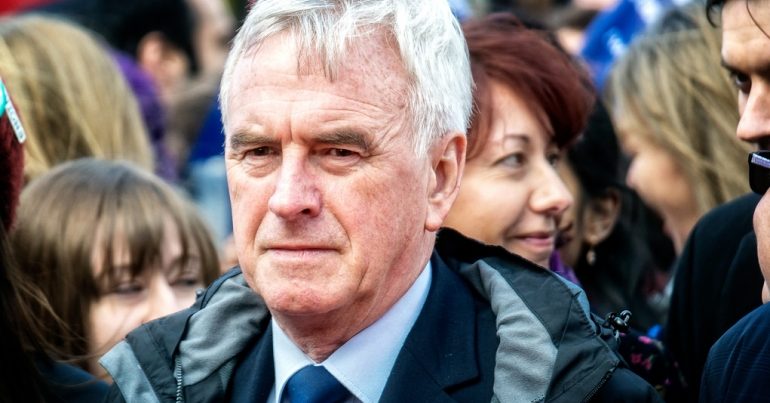 Marxism is back on the agenda, apparently.

But it’s not the real reason why shadow chancellor John McDonnell is pushing the right-wing press into overdrive.

On BBC Question Time on 10 May, work and pensions secretary Esther McVey said McDonnell “agrees in Marxism”. Unsurprisingly, this echoed a Daily Mail ‘story’ from the previous weekend, which bellowed:

And this wasn’t too far off a Sun headline earlier in the year, which read:

In essence, the hard-right rags were just sticking images of Stalinist terror in the heads of anyone thinking about criticising capitalism.

But is ‘Marxism’ really just a synonym of ‘Soviet Russia’?

The Cambridge definition of Marxism doesn’t mention Russia, China, or any other country for that matter. It just says:

a social, political, and economic theory based on the ideas of Karl Marx, who imagined a society where the methods of production would be owned and controlled by all its members

McDonnell has previously said he’s taken great influence from both Marx and key Marxist theorists. What he hasn’t done is proclaim undying love for Stalin. He’s merely admitting the intellectual influence of a major thinker on his thought; a theorist who has in recent years received praise in the New York Times, Rolling Stone, the Independent, and the Financial Times.

And Marx influencing McDonnell says little about his particular stance on capitalism, socialism, or communism – all broad concepts with many strands and possibilities within.

So why does the mere mention of Marx push corporate tabloids into a feverish witch-hunt of Cold War proportions?

A key part of the tabloids’ campaign to blur the lines between socialism and Marxism and Stalin’s gulags is to make the ideological battle seem black and white. It’s freedom vs dictatorship, good vs evil, virtue vs decadence.

But politics is a lot more complicated than that, as the Political Compass has shown us in recent years:

So why is it so important to make things seem black and white?

Well, because when you actually look at the words and plans of McDonnell’s Labour Party today, there’s very little to be scared of. The policies would be the social democratic mainstream elsewhere in Europe. And without the use of threatening imagery, these ideas could easily attract mass support from people who are sick and tired of ‘business-as-usual’ politics.

At the World Economic Forum in Davos earlier this year, McDonnell told employers that his message was simple:

He has also stressed the importance of democratising ownership in Britain’s economy; insisting that “co-operatives, shared ownership, and workplace democracy… all have a central role to play”. He has called for doubling the size of the co-operative sector and for putting “democratically owned and managed public services irreversibly in the hands of those workers, and of those who rely on their work”. And he’s explained:

We will do this… not only because it’s the most efficient way of running them, but also because the most important protection of our public services for the long term is for everyone to have and feel ownership of them.

Using the wealth of knowledge and experience behind us

On one occasion, McDonnell responded to questions about Marx by insisting:

I also believe in the long tradition of the Labour Party, which involves people like GDH Cole, Tawney, and others. You put that all together and you have, I think, a direction for our economy based upon sound principles and fairness.

Richard Tawney believed in “the diffusion of power through society”, and “empowering working people through education”. George Douglas Howard Cole, meanwhile, believed in “self-government for working people, through local units of control and accountability, with different centres of power”. As LabourList describes, this “was not ‘state’ socialism, but something far more radical: the idea that workers could do it for themselves”. For Cole, socialism meant:

local ownership and democratic control; citizenship as an active, not a passive, state; democracy as a way of living, not an abstract theory; a small, strategic state atop a panoply of regional, local and neighbourhood bodies and agencies run, owned and accountable to the people…

In short, McDonnell draws influence from the wealth of knowledge and experience that has gone before us. And his policies show that. So the next time someone screams ‘Marxist!’, please feel free to politely remind them of that fact.