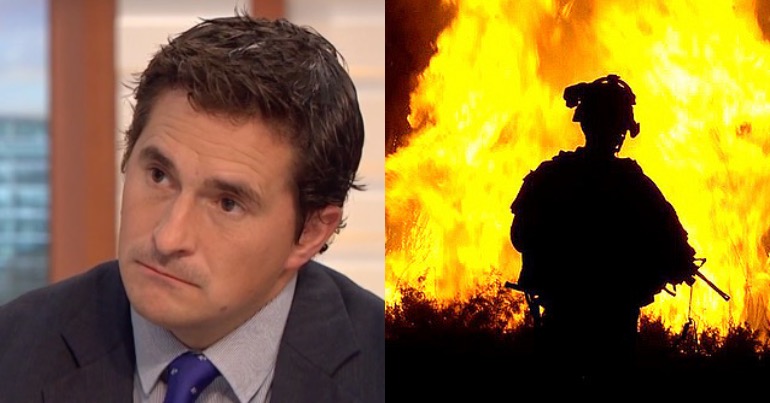 The Plymouth Moor View MP is an ex-army captain and Afghanistan veteran who wrote the 2017 book We Were Warriors. And on 26 November, he tweeted:

The application of violence to defeat the enemies of the nation has become worryingly unpopular. Nothing wrong with fighting (yes killing) for values/what you believe in. The oppressed/bullied/tormented/voiceless deserve it. Join the fight; best thing you’ll ever do. https://t.co/pkKHy32Sgi

Mercer’s advocacy of violence raises a number of disturbing questions – whether this killing targets “enemies of the nation” or not. Because any civilised society should celebrate its population’s dislike for violence rather than lamenting it.

Yet Mercer’s views are hardly surprising. He recently described the White Poppy peace initiative, for example, as “attention seeking rubbish”. And earlier in the year, he called for Britain to “blitz” Syria with bombing raids.

Clearly a man of peace…

One would also hope that – considering the death toll inflicted by, and on, the British military contemporarily and historically – Mercer would pause before glorifying violence.

For example, 179 British servicemen and women died after the 2003 invasion of Iraq. And as of October 2015, 456 further servicemen in Afghanistan since 2001.

Considering these body counts and the level of violence and mayhem, one must seriously question Mercer’s moral judgement. Because the public’s hostility to more killing is a healthy reaction to history, not a cause for concern.

When glorifying violence is acceptable

Mercer’s comments highlight the ease with which supporters of state violence can express their views without condemnation – something Twitter‘s guidelines on ‘glorifying violence’ actually enshrine by expressly excluding “acts of war”, “military attacks”, or “state-sanctioned executions”.

His argument could also be very dangerous. For example, his assertion that there’s “nothing wrong with fighting (yes killing) for values/what you believe in” could be a rallying cry for all political violence, terrorism, and human rights violations throughout human history. And although Mercer qualifies that he’s discussing violence in the name of “the oppressed/bullied/tormented/voiceless”, the fact is that many people pursuing political violence could claim to be helping the same groups.

Would this extend to Brexiteers potentially rising up against the government ? For many they see the proposed Withdrawal Agreement as a complete betrayal of the nation. In ignoring the referendum result the government have made them oppressed/bullied/tormented and voiceless.

The myth of moral British violence

Mercer’s argument also seems to assume that British state violence – or that which Britain’s allies perpetrate – is moral. Yet a quick glance at historian Mark Curtis’s book Web of Deceit shows that the “oppressed/bullied/tormented/voiceless” have frequently been the last concern of the British state. Indeed, in most cases British forces have been the oppressors, tormentors and bullies.

But after all, this is the same Johnny Mercer who in October 2016 voted against a motion to suspend government support for Saudi Arabia as they murdered and bullied Yemen’s civilians. And a quick search on Twitter shows a conspicuous absence of tweets about Saudi Arabia‘s devastating bombing campaign against Yemen. In fact, here he is showing the Saudi armed forces his support:

Great visit this morning. Speaking to some of the lads in the Air Operations Cell in Riyadh watching Syria and Yemen pic.twitter.com/YWqG49Xtc2

In short, it seems Mercer’s belief in state violence to help tormented civilians ceases when British strategic interests or those of arms dealers are at risk.

Lastly, and perhaps most chillingly, he concludes his tweet with:

Join the fight; best thing you’ll ever do.

This is all the more concerning as it comes within a tweet endorsing the “application of violence”. This makes the pursuit of righteous violence seem like a hook to attract recruits. And Mercer’s tweet has all the hallmarks of naked military recruitment propaganda.

People like Mercer are the ones we should really worry about

Nobody should ever be enthusiastic about violence, whether by the state or otherwise. And the normal disposition of any civilised peace-loving nation should be to find violence an unpopular idea.

All in all, Mercer’s disappointment at the public’s dislike of violence reveals more about his own moral failings than those of the public themselves.