In one fell swoop, the UK government destroys its own 'moral' case for war in Syria - Canary 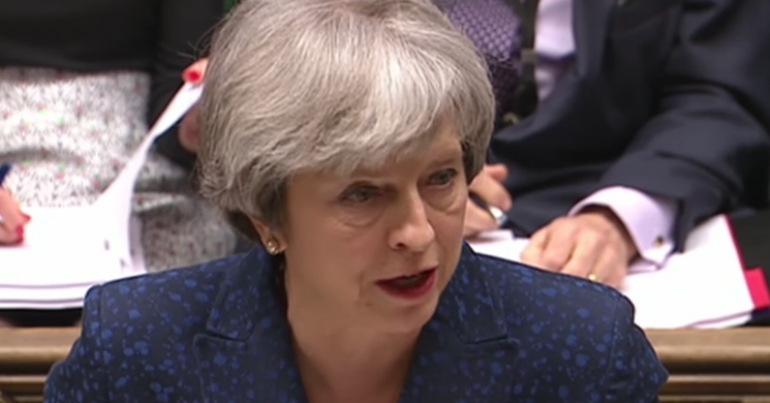 The UK is now potentially on the precipice of further bombing in Syria, because the governing party apparently feels a moral obligation to take action after an alleged chemical attack there.

The government, however, just destroyed its own ‘moral’ case for war. Because it celebrated the 70th anniversary of the world’s milestone human rights declaration by visiting Israel – a country which is itself responsible for numerous despicable attacks on innocent people.

So much for the UK’s moral authority.

On the 70th Anniversary of the UN Declaration on Human Rights, the UK’s ‘Human Rights Minister’ (don’t laugh) is actually in… Israel. Where he hopes to “discuss cooperation”.

If the UK had a functioning news system, the state might crumble within 48 hours pic.twitter.com/mCuNlSaB4m

The UN General Assembly adopted the Universal Declaration of Human Rights in 1948, following WWII. It’s essentially a promise from abiding nations to learn from history. It’s a vow to afford people the sort of rights that the Nazis denied to Jewish people and others.

Israel, however, doesn’t grant many of the declaration’s rights to Palestinians. During its 50-year-long occupation of Palestine, Israel has routinely denied people there the right to life, liberty, dignity and free movement. Its recent decision to use lethal force against unarmed protesters in Gaza, killing at least 30 people and wounding thousands of others, is just one example of this.

Nonetheless, foreign office minister Lord Ahmad of Wimbledon chose to spend the 70-year anniversary of the declaration in Israel discussing “cooperation” with the country. Ahmad, who describes himself as the government’s minister for human rights, says he also visited the Occupied Palestinian Territories (OPTs):

Constructive meeting with Palestinian Prime Minister Hamdallah to discuss #humanrights in the #OPTs, including UK support for gender equality and freedom of expression, and #Gaza pic.twitter.com/E5EP4aPJjg

Perhaps he should raise that with the Israeli government too. Because it’s the one shooting Gazans in public when they turn out to protest.

But as Ahmad marked a human rights anniversary by discussing “cooperation” with a human rights violator, his fellow Conservative Johnny Mercer called for a “blitz” in Syria. The Plymouth MP wrote a column in The Sun about the awful images reportedly coming out of Douma, where the alleged chemical attack happened.

Mercer was unequivocal: innocent civilians have died, including children, so the UK must do something.

It didn’t take long, however, for people to point out how selective Mercer was in his outrage:

But you also can't pick and choose which of your fellow men you defend!
#hypocrite #YemenGenocide #ReturnMarch #RohingyaCrisis

UK bombs & UK planes & UK advisers & UK political support are key enablers, as we speak, of a devastating Saudi-led war on Yemeni civilians, producing the world's worst humanitarian crisis according to the UN. The sheer hypocrisy of Mercer's posturing is beyond breathtaking.

Mercer’s “posturing” is indeed “breathtaking”. Because his government has done sweet FA to punish Saudi Arabia for bombing the Yemenis to bits, nor has it attacked Burma for its genocide against the Rohingya people. And there’s no UK comeuppance coming to Israel over its brutal treatment of the Palestinians. The ‘human rights’ minister’s visit has certainly made that clear.

Mercer isn’t the only politician or commentator baying for justice either. The UK now has plenty of war cries like his. But nobody has carried out an investigation into the attack in Syria yet. So until an investigation proves who’s guilty, justice cannot be truly served.

And justice is, of course, meant to be blind. We’re meant to apply it to all people, equally. So it’s really difficult to believe that Mercer and his government believe in it at all when they’re so blatantly selective about who deserves it.