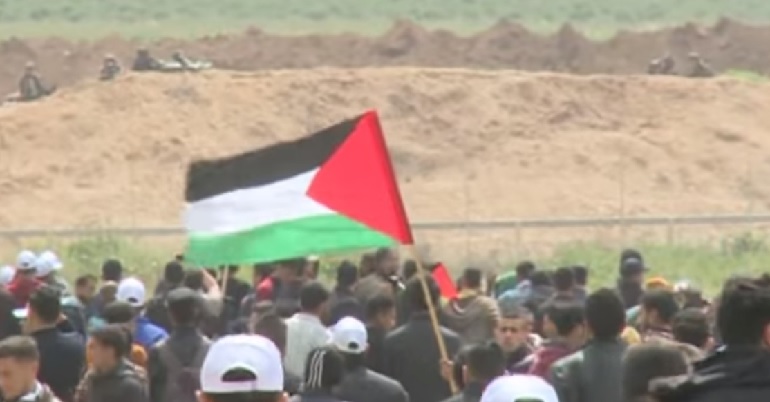 Israel’s armed forces have deleted a tweet after unwittingly admitting to the recent massacre in Gaza.

On 30 March, Israeli soldiers shot at protesting Palestinians in the Gaza Strip. At least 17 people died – 12 of those at the protests. Hundreds more suffered injuries. But far from claiming this massacre was an accident, the Israel Defense Forces (IDF) tweeted:

everything was accurate and measured, and we know where every bullet landed

But almost no media outlets seemed to talk about this admission.

In the UK, however, there was widespread condemnation of Israel’s actions. Labour’s Jeremy Corbyn, David Lammy, Richard Burden, and Chris Williamson were among those to speak out. Green MP Caroline Lucas also expressed her concern, along with Plaid Cymru MPs and the SNP’s Tommy Sheppard.

Actor and writer David Schneider, meanwhile, lamented the irony of the massacre coinciding with Passover celebrations:

Grim to be having Passover which celebrates the liberation of an oppressed people in the Middle East, and then read this: https://t.co/CJDisv533y

But it was Israeli human rights group B’Tselem which had one of the loudest voices both before and after the massacre. A day before the event, it tweeted:

Official Israeli statements have made no reference to the actual reason for the protest – the disastrous reality in Gaza – or to the right to free protest. Israel has made Gaza a huge prison, yet forbids the prisoners even to protest against this, on pain of death.

Media reports indicate: soldiers are ordered to shoot anyone coming within 300 meters of the fence; snipers will fire at anyone touching it; live fire will be used in circumstances which are non-life-threatening.
In other words: shoot-to-kill unarmed Palestinian demonstrators

Israel is ignoring the humanitarian disaster in Gaza and its responsibility for it, couching planned Gaza protest in terms of a security risk, framing demonstrators as terrorists, referring to Gaza as “combat zone”. Gaza is NOT “combat zone”, shooting at demonstrators IS a crime

Then, as the events unfolded, it tweeted:

B’Tselem: Shooting unarmed demonstrators is illegal and the command that allows it is manifestly illegal https://t.co/drC8AXyFNI

Friday was a bloody day, but Israel has already long since become an expert at whitewashing such bloody days and weeks. Do not anticipate any investigation, and even if eventually one is conducted, certainly do not expect accountability. https://t.co/S2NwKIaoRo

In the article above, B’Tselem’s executive director Hagai El-Ad wrote:

From time to time, control over another people requires days of killing and slaughter.

Israel, however, said the protesters were part of a “hostile infiltration” orchestrated by Gaza’s Hamas government. An IDF spokesperson said all the people killed had engaged in violence. And Hamas itself reportedly acknowledged that five members of its military wing had died on 30 March.

Israel, the US and the EU have designated Hamas as a terrorist organisation. But the party, which rules the Gaza Strip, labels itself “a national resistance movement”.

Between 2001 and August 2014, rocket and mortar attacks from Gaza (not necessarily launched by Hamas) reportedly killed 30 civilians in Israel. During the 2014 Israeli assault on Gaza alone, meanwhile, roughly 1,500 Palestinian civilians lost their lives, along with five civilians in Israel.

B’Tselem is now calling on Israeli soldiers to disobey “illegal” orders to shoot protesters, and is launching a campaign around this issue on 5 April:

We are publishing newspaper ads in Israel captioned “Sorry Commander, I cannot shoot” clarifying to soldiers that they must refuse to open fire on unarmed demonstrators in Gaza. This unusual step is following Friday’s events, when soldiers used live fire & killed 12 Palestinians pic.twitter.com/NMxHJ5jyru

This is big: Israeli human rights NGO @btselem is calling on IDF soldiers to refuse the “illegal command” to shoot unarmed Palestinian protesters, and will be running ads throughout the country.

The campaign is called, “Sorry commander, I cannot shoot.

Ongoing massacres like the one on 30 March only push peace further away from Israel and Palestine. And until civilians and soldiers alike say ‘no more’, both sides – the occupier and the occupied – will effectively remain at war. And innocent civilians, as always, will be caught in the middle.

This situation cannot, and must not, go on.

– Also find out more about the Palestinian Solidarity Campaign; about the Boycott, Divestment, Sanctions (BDS) movement; and see other Canary articles on Palestine and Israel.