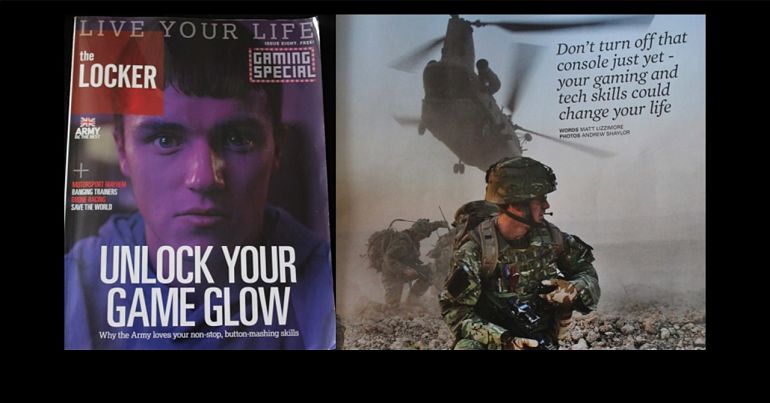 At 15, my son is a child. But in a year, he can enlist to join the army. The UK is the only EU country that allows children to enlist at 16. My son won’t be able to vote. He won’t even be officially old enough to play some of the war games the army magazine refers to. But this country thinks it’s okay to teach him to kill.

The Locker is the army’s advertorial magazine. The Unlock Your Game Glow copy my son received was issue eight. The previous edition was given away with Stuff magazine.

Sitting alongside the army’s new recruitment campaign, The Locker is a weird mix. Next to adverts to join the army, a chef from the Royal Logistics Corps shares his method of making “the perfect poached egg”. Or you can read a vehicle mechanic’s top tips for FIFA 19.

Then there’s the not very well thought out fashion column of “newly dropped garms” to “keep you warm while looking fresh this winter”. But whoever thought of naming the column Feeling Fash probably needs the sack. 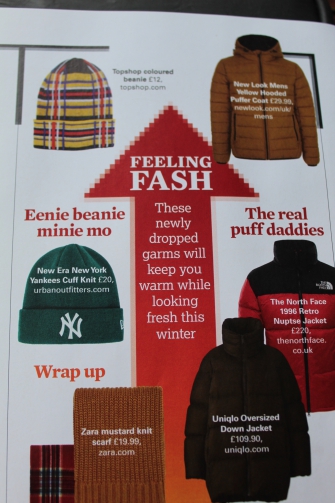 “Why the army loves your non-stop, button-mashing skills”

But presuming that Feeling Fash is not a nod to the far right, the most sinister elements of the magazine are aimed at turning gaming skills into military skills.

One feature article is Game of Life and it asks: “But can you do it for real?” Accompanying pictures show recruits playing computer games as a training exercise. One of those who took part explains:

Today’s exercise was a little bit like Call of Duty – I’m a big CoD fan. It was pretty fun, and in terms of realism, it’s what you’d expect if you were to go into somewhere like that.

Gamers are used to working without someone seeing them… talking to them over a headset, but able to have that level of teamwork. 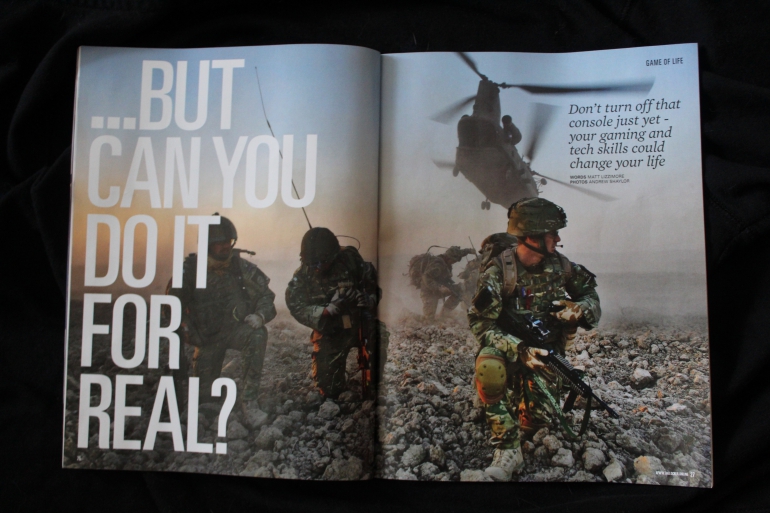 Mum’s going off on one again…

A common feature in our household is eye-rolling as I get politically correct about whatever aspect of life my teenager is currently talking to me about. But I’m glad that I do. And I’ve done it for years.

My child, like most children, wanted to play video games like CoD long before the designated age. And CoD, as a war game was one that particularly disturbed me. As the Guardian described, the Modern Warfare iteration of the game:

was in part to freshen the fiction, but it was also intended to allow for contemporary modes of combat. In one of Modern Warfare’s most memorable missions, “Death From Above”, you control the gun turrets of an AC-130 gunship as it attacks enemy targets in Western Russia. Through the greenish wash of a night vision camera lens you watch the luminous shapes of men on the ground running at full pelt for cover. It’s a scene as grimly and dispassionately realistic as any late night news report.

So my child wasn’t allowed to play CoD for years. And when he was, it was after long discussions about war and the army. It was after he could prove to me that he understood and could articulate the problems I had and why it was an issue. In fairness, he may just have learnt to parrot back my concerns enough to shut me up. But we had the conversations. And it was enough that I knew he understood.

My child’s also been raised on a diet of anti-militarism activism. Of course, he might rebel and join the army. Although at the moment it seems unlikely.

But this isn’t the point. In a parallel universe, he could be ideal cannon fodder for today’s army. He’s grown up in a rural town. Escaping to university is now a costly business, and it’s easy to see how glossy pages promising adventure and gaming offer a convenient way out.

Then add into the mix the fact that, as in so many schools, armed services recruitment talks are a regular classroom feature at my son’s, and the military becomes a normalised career path.

No-one should join the army without the full knowledge of what they’re signing up for. Military recruitment preys on poor and disadvantaged people, promising adventure and escape rather than killing, out-of-date equipment and lack of care for veterans.

Our children are not cannon fodder. 16-year-old kids should not be allowed to enlist at all. And this latest glossy advertorial is nothing but vomit-inducing propaganda.

Featured image and other images via Jack Apple