‘Business as usual’ politics is imploding, and establishment figures are bricking it - Canary 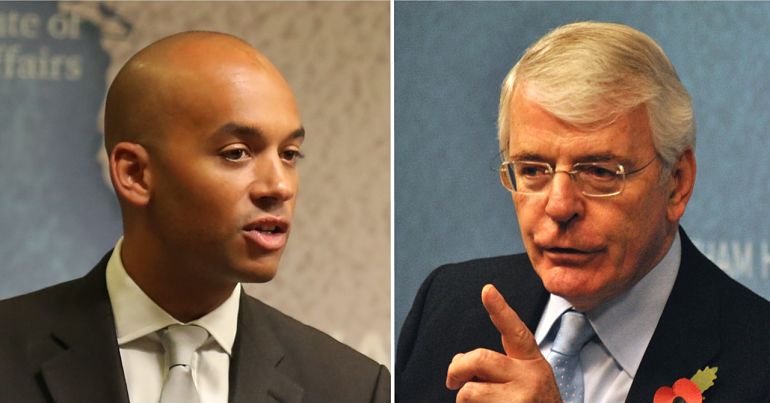 Both major UK parties have lost MPs this week. And it’s just the latest sign that ‘business as usual’ politics in the country is imploding.

Change is coming, and establishment figures know it. That’s why they’re not going down without a fight.

For many Labour members, the reaction to Chuka Umunna and co jumping ship this week was probably ‘good riddance’. Because the out-of-touch Labour right has been undermining Jeremy Corbyn’s leadership for years. And their exit could bring Labour one big step closer to rescuing its progressive soul.

Until the election of Corbyn as Labour leader, the Conservatives had long been moving further and further to the right; and Labour had been shifting rightwards with them. This left progressive Brits with less and less of a home in establishment politics. And the UK’s anti-democratic two-horse-race electoral system was happy to sideline them.

British politics is changing. But establishment politicians still want us to carry on as normal. Former PM John Major’s response to Umunna and co leaving Labour was a good example. On 19 February, he said “I admire their courage and their conviction”. And he insisted:

He also called for the Labour, Conservative and Liberal Democrat parties to avoid the ‘sidelining’ of “mainstream opinion”. Otherwise, he said, “the country’s only choice would be between the extremes of Left or Right”.

But there’s a massive problem with establishment politicians lecturing us about what ‘mainstream’ views are. Because Corbyn’s Labour Party does actually represent majority public opinion in a number of ways. Most people want public ownership of key industries, for example. That means railways, energy, water, education, and the NHS.

Corbyn also echoes public opinion on foreign policy. Because people have seen how terrible Britain’s interventions abroad have been; and they don’t want them to continue. Nor do they want us to keep selling arms to war criminals.

Finally, like Corbyn, Britain’s sick of austerity. And perhaps the biggest reflection of that (and the above) was Labour getting its biggest vote share increase since 1945 in the 2017 general election.

In short, establishment politicians need to wake up or shut up. Because they’ve pushed for privatisation. They’ve backed disastrous wars abroad. And they’ve forced the suffering of austerity onto us. So they’re the ones who truly hold extreme, fringe views and ignore ‘mainstream opinion’.

Major’s suggestion that ‘extremes’ on the left and right are the same is bullshit. And it’s deeply offensive. Because on one extreme are people pushing austerity, war, and privatisation; on the other are people pushing for fair pay and funding, peace, and democratic ownership.

The best way to end extreme elitist politics is to empower voters and disempower the establishment. And that means improving our democracy. As MP Caroline Lucas insisted on 20 February:

At the last general election, 68 per cent of votes didn’t get translated into seats.

So Major and Umunna may think business as usual is fine – that our democracy was great until ‘extremists’ hijacked it. But it isn’t, and it wasn’t. True democracy should represent the rainbow of varying views within society. A ‘winner takes all’ system does us all a disservice. And the sooner our system truly represents the majority of the country, the better.

Under Corbyn, popular opinion in the UK is represented better than it has been in many years. Establishment politicians fear that. Change won’t happen overnight; but it’s coming. And the more we fight for it, the sooner it’ll get here.