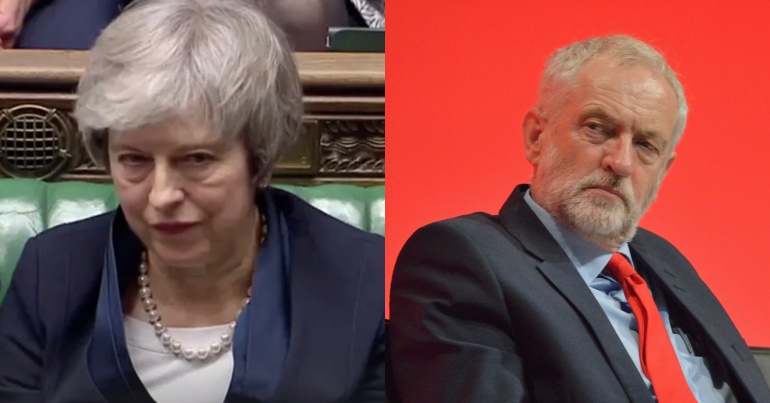 Theresa May has now promised she’ll step down as prime minister if parliament backs her terrible and unpopular Brexit deal. But that’s no solution. Because there’s not only chronic Brexit disagreement in parliament; there are also far more pressing problems across the UK that need urgent attention. And a general election can solve both with one blow.

The best solution for Britain’s woes

Key Labour Party figures are still calling for a general election as the best way out of Brexit deadlock. And in response to May’s promise, Jeremy Corbyn insisted:

A change of government can’t be a Tory stitch-up, the people must decide.

Corbyn whipped Labour MPs on 27 March to back ‘second referendum’ plans as an option for ending the Brexit impasse. But he’s also tried carefully to respect and unite voters. Because both Leavers and Remainers backed Labour at the last election.

Barry Gardiner is 100% correct. Labour is not a Remain Party. Labour is also not a Leave Party. All polling shows 15m+ voters want out & 15m+ want to stay in. Any party aspiring to govern should bring both sides together. Labour’s Plan is to Leave EU but Remain very close to EU

I voted remain, but I think this is wrong. I want @UKLabour to appeal to both remain and leave voters. Our CLP, the party's safest, voted 52% leave, 48% remain in the referendum. We are not going to ignore half our vote. We are a socialist, anti-austerity party.

Remain & reform is probably best for Britain, but Leave won.

No majority in parliament for Second ref, Remain, or hard/no-deal Brexit.

In short, division across Leave and Remain lines is distracting us from what matters. And Labour gets that there are too many truly important issues at stake to foster even more division.

The urgent issues that can (and should) unite us

In my family, there’s one passionate Leaver and one passionate Remainer. Then there are two of us who think the endless Brexit debate is a dangerous distraction; one of the biggest in decades. Indeed, it’s distracted us from:

Meanwhile, there are many things Britain can agree on. We’re sick of public services not getting the funding they need. We agree with much stronger government action to tackle climate chaos. We believe in public ownership of railways, energy, water, education, and the NHS. And we oppose disastrous military interventions abroad (while wanting our country to stop selling arms to war criminals). We should also be able to agree that the Conservative Party is not the party to give us any of those things.

A better use of our passion and energy

The Tories haven’t only failed to get a Brexit deal parliament can get behind. They’ve also made Britain a worse place to live in.

It’s time to unite behind the truly important issues. So let’s have a general election. Let’s put the real problems on the table. Then voters can decide who we really trust to make the UK a better place to live in.