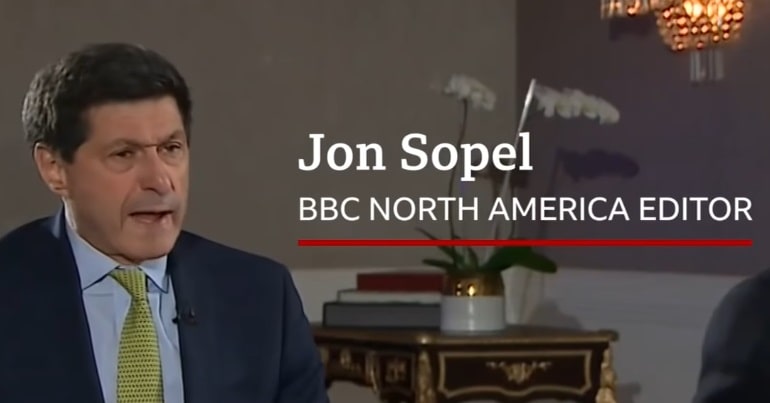 The BBC has broadcast seven apparent fabrications about Julian Assange in less than three minutes. In an interview, BBC North America editor Jon Sopel failed to meaningfully challenge Ecuadorian president Lenín Moreno on any of his accusations against the former WikiLeaks editor. That’s despite Moreno having a track record as a bullshit artist to the point where he U-turned on the central thrust of his entire governmental programme.

In the interview, the Ecuadorian president alleged that WikiLeaks has never released “information about [Russia]”. And Sopel didn’t remotely challenge the claim. Yet a casual search on the WikiLeaks website reveals dozens of pages revealing negative information about the Kremlin. For example, in 2017, WikiLeaks published documents exposing Russian surveillance companies. And in 2015, WikiLeaks released emails claiming to show “Russia’s Master Plan to Break the Trans-Atlantic Alliance”, which US outlet the Wall Street Journal picked up.

On the BBC, Moreno also accused Assange of “smearing his faeces on our embassy’s walls”. And Sopel simply accepted the accusation with a concerned expression. But the embassy is under CCTV surveillance. So if Assange had smeared faeces around, the pro-US media would almost certainly have footage. Indeed, Ecuador released CCTV images to the Daily Mail, which tried to paint the journalist as presiding over a “fetid lair”. The issue is that the images only show a few dirty plates:

The Daily Mail argues we should disregard someone's human rights, end freedom of the press and break international law on asylum because that person didn't immediately wash up their dinner plate. pic.twitter.com/6rew0CAJdr

In a despotic way, he even attacked some of the guards

But as with the faeces allegation, there would surely be footage of this. And again, Sopel didn’t challenge him.

More to the point, if a refugee – who’s essentially been detained in an embassy for seven years – is smearing faeces on the wall or attacking guards, they probably need urgent medical assistance. The answer is not to revoke their asylum, breaking a fundamental principle of international law and several treaties. ‘Non-refoulement’ means it’s illegal for states to allow the persecuting country, in this case the US, to get their hands on a refugee.

On top of that, the individual characteristics and general behaviour of Assange are irrelevant to upholding freedom of the press. The US indictment against Assange essentially represents the criminalisation of investigative journalism. It defines a journalist’s alleged discussion about protecting a source’s identity as “conspiracy” against a state.

Moreno then alleged that Assange “published private photos of my family”. Yet this is a well-documented fabrication. Because as former counsel of Ecuador Fidel Narváez explains:

Not a single document referring to INAPAPERS, or the president’s family, has ever been leaked or published by WikiLeaks, let alone by Julian Assange, who for more than half a year has not been its editor and who has been isolated for one year under a [“quasi-prison”] regime… by the government of Ecuador.

In fact, La Fuente published the documents, and WikiLeaks merely tweeted about it.

Moreno then called Assange a “cyber terrorist”. But WikiLeaks is a media organisation that publishes accurate information in the public interest. Not even WikiLeaks‘ enemies dispute the truthfulness of its publications. So Moreno’s redefinition of internet-based journalism as ‘cyber terrorism’ is clearly dangerous.

Moreno also accused Assange of selecting stories “conveniently and according to his ideological commitments”. An amusing allegation, given that anyone who’s taken a pedestrian glance at the corporate media knows that’s a central theme of its reporting. But the same cannot be said of WikiLeaks. Because the publisher has released documents on governments across the world, including the US, Iran, Kenya and China, as well as the UK far right. Given that WikiLeaks focuses on whistleblowers, its publishing seems to depend predominately on which sources come forward.

Moreno claimed WikiLeaks has ‘interfered’ in elections. But publishing truthful information about governments in the public interest is not ‘interfering’ – it’s journalism.

In his presidential campaign, Moreno painted himself as a progressive and promised an investment-led government. He then flipped on the Ecuadorian people to roll out austerity, take loans from the International Monetary Fund, and ban former president Rafael Correa from registering a new party. Correspondingly, Moreno’s approval ratings have plummeted to 17%.

Now, it seems Moreno has continued with his bullshit; with the help of BBC News, which failed to meaningfully challenge any of his accusations. This is an absolute shitshow that we must call out.