We need to talk about James O'Brien. Because he just stepped way over the line. - Canary 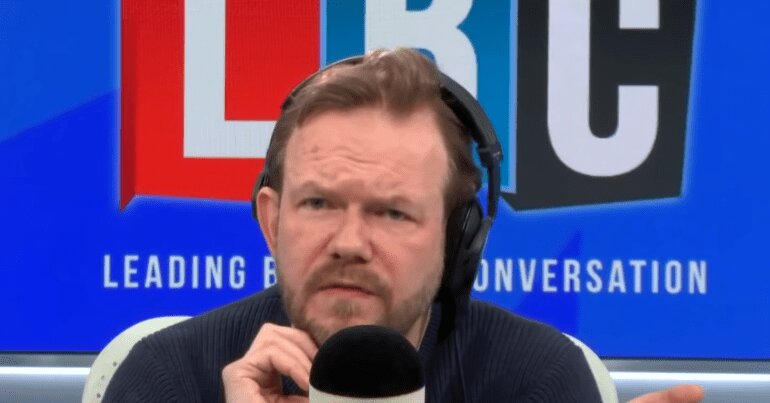 LBC host James O’Brien asked in 2016 “what’s not to like?” about Jeremy Corbyn’s domestic and foreign policies. But since then, O’Brien has retreated further and further back to increasingly ludicrous establishment talking points. And on 1 May, he went way over the line:

I like & respect my local Labour MP, I like & respect many senior Labour MPs who’ve urged me to be patient but, right now, if I voted for Jeremy Corbyn’s Labour Party I wouldn’t be able to look a Jew, an EU citizen, anyone set to be hurt by Brexit or myself in the eye ever again.

Kicking the smear up a notch

This is the latest instance of O’Brien peddling the establishment smear that antisemitism is an institutional problem for Labour. While there are genuine cases of antisemitism within the party, anyone who’s looked beyond the headlines knows that talk of a ‘crisis’ is manufactured:

“The media, myself included…”

The media, myself included, now have to stop talking about Jeremy Corbyn like he is some sort of pimple on the backside of British politics and start talking about him as the only alternative prime minister to Theresa May.

Corbyn remains the only alternative. And prime minister May is presiding over an austerity regime that’s been linked to over 30,000 annual excess deaths. Yet O’Brien has gone back to focusing much of his energy on smearing that alternative.

And not only with the antisemitism allegations. O’Brien’s charge that EU citizens should blame Corbyn for Brexit is patent nonsense. Corbyn’s Labour has been the most willing party to compromise and find a solution to the Brexit deadlock. For instance, in the second round of indicative votes, Labour backed every motion except one from the SNP that could see Article 50 revoked. These were two softer forms of Brexit (a customs union and alignment on the single market) and a confirmatory vote on any withdrawal agreement. The thing is, Corbyn isn’t in government and therefore doesn’t have the parliamentary numbers to bring about these outcomes. This obvious fact doesn’t seem to bother O’Brien or the Guardian‘s coverage.

That isn’t the half of it

Putin’s got Farage & Seamus Milne doing his bidding & a Lord on the payroll. Corbyn’s pushed his base to a point where they have to ignore the evidence of their own eyes & ears to continue supporting him. And Brexiters are still wanging on about ‘alternative arrangements’.
Great.

This is the worst kind of McCarthyite ‘all genuine progressives are traitors’ bollocks. Still, O’Brien’s conspiracy theories don’t stop there. In January, he alleged the Tories secretly want Corbyn in power:

Why is Corbyn's core support currently devoting so much energy to attacking 'centrists' and Remainers instead of Conservatives?
Because Conservatives want Corbyn to stay in power.

What a shambolic take from someone who wrote a book called How to be Right. In the 2017 general election, Corbyn increased Labour’s vote share by more than at any point since 1945.

It only gets more ridiculous

In another attack, O’Brien equated Corbyn supporters with those who back Donald Trump:

Today seems to have been Jeremy Corbyn’s “I could stand in the middle of Fifth Avenue & shoot somebody & I wouldn’t lose voters,” moment. Let’s hope that his ‘base’ has more intellectual integrity than Trump’s. I still can’t quite believe that I’m far from sure it does.

Yes, the people who want to tackle the systemic issues of free market capitalism and those who want to scapegoat immigrants are the same. Well done James.

In short, it’s all too clear that O’Brien is no friend of the global movement for progressive change. The ‘liberal’ commentator is quite the opposite.