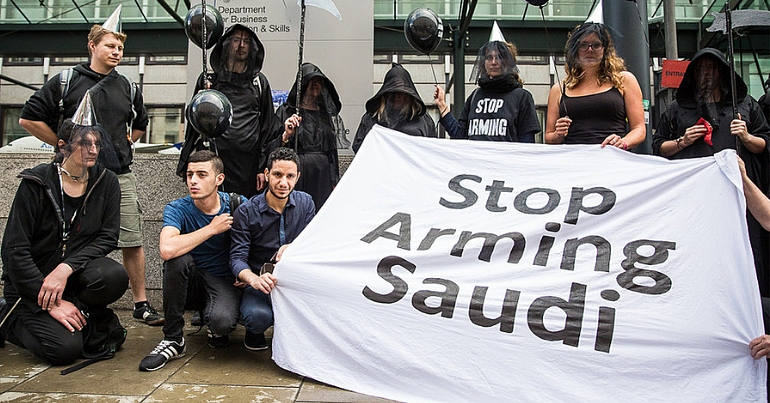 On 9 May, one of the world’s biggest arms companies, BAE Systems, held its AGM. As is regular at these events, activists with £1 shares asked the board difficult questions about the company’s role in arming countries like Saudi Arabia.

But it was an answer to one of these questions that shows exactly how far from reality the company is. Moreover, it shows how necessary it is for all of us to take action to stop the arms trade once and for all.

As the Morning Star reported, chair of BAE Systems Roger Carr was questioned by Rehab Jaffer, a British-Yemeni lawyer. She told the AGM:

But Carr was unmoved, replying:

It is a fact of life and a fact of war, that in warfare innocent people are hurt.

Our belief is that if you provide first-class equipment, you are the encouragement, particularly when used in defence, for people to stop fighting.

It’s hard to imagine anyone claiming that the weapons used in Yemen are helping to “stop fighting”, let alone in response to someone whose family has been directly affected by the conflict.

The Saudi-led coalition started bombing Yemen in 2015. According to the Armed Conflict and Location Event Data Project, more than 70,000 people have been killed since January 2016. And Al-Jazeera reported that UN figures show:

100 civilians were either killed or wounded every week in Yemen in 2018, with children accounting for a fifth of all casualties.

Meanwhile, the United Nations Emergency Relief Coordinator stated that 10 million people in Yemen are “just a step away from famine”. Save the Children estimated in 2018 that 85,000 children under five had died from malnutrition.

This year alone, there have been 109,000 reported cases of suspected cholera; 190 people have died, and a third of all cases are children. In 2017, Yemen had the largest outbreak of cholera since records began, with over a million people catching the disease.

It’s no wonder the UN has consistently called the conflict “the worst humanitarian crisis in the world”.

But that’s okay, apparently. Because ‘innocent people are hurt in wars’, and all the amazing arms hurting them are ‘encouraging the fighting to stop’.

Profiting from death and misery

Carr and BAE Systems clearly don’t care about Yemeni children. But they do care about profit.  And recent reports show that all this death and misery is good for business. According to Forces Watch:

Defence contractor BAE Systems achieved more than an £8 billion increase in orders in 2018 and a 14% rise in annual profits.

Saudi Arabia accounts for 14% of BAE Systems’ business. And information from Campaign Against Arms Trade (CAAT) states that:

Further Typhoon aircraft have been delivered to Saudi Arabia during the bombing and BAE and the UK government are pushing hard for a new contract.

BAE has 6,300 staff in Saudi Arabia to support the operational capabilities of the Saudi armed forces.

Enough is enough. Shut them down.

Thousands of people have died and will die as a result of UK weapons. Companies like BAE and individuals like Carr will continue making money from death, destruction and misery.

None of us should allow this to continue. It’s down to all of us to shout ‘not in my name’ as loudly and as often as we can; preferably from the rooftops of arms company buildings.

These companies have offices and factories all over the UK. And in September, London will host one of the world’s biggest arms fairs – the biennial Defence Security Equipment International (DSEI). Last time DSEI was in town, over 100 people were arrested; lorries trying to enter were delayed for hours; and The Canary was told that contractors were having to work overtime to get the exhibition open on time.

This year, with enough people, we could prevent it from even opening. And we must. Because people are dying. And our government isn’t going to stop the likes of Carr and BAE Systems. So it’s down to us, ordinary people who can’t stomach this any more, to get out there and say enough is enough.