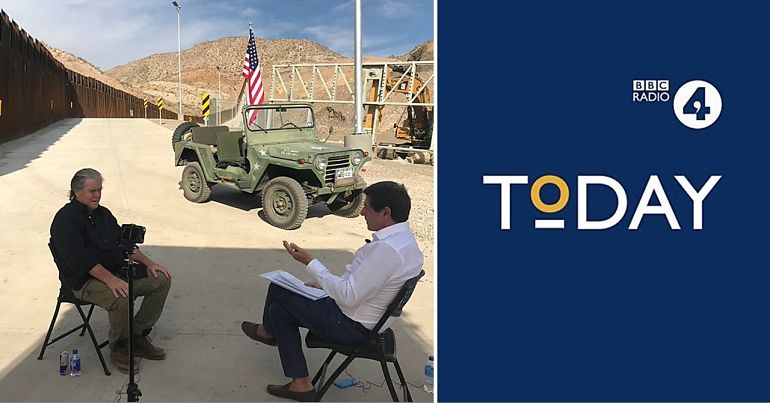 On 31 July, BBC Radio 4 broadcast an interview with Steve Bannon. It prompted fierce criticism as a new low. Because the BBC gave airtime to a known white supremacist and racist.

Although Bannon was introduced as a “divisive polarising figure” the BBC failed to give any context. It didn’t mention, for example, that Bannon’s previously told people to ‘wear racism’ like “a badge of honour”. Bannon said:

Brexit and the Trump election are inextricably linked. … It was inevitable that someone like Boris [Johnson] would… become prime minister… I have said from the beginning a no-deal, hard out is the way to go.

But is the civil service… the bureaucracy in London, prepared to do that? I don’t think so… My belief is that you ain’t seen nothing yet… True leadership’s gonna come to the forefront.

When asked if he was still in touch with Johnson, Bannon replied, “I stay in touch with Nigel [Farage] quite a bit”. But he made his total support for Johnson clear. And he went on to support what he thinks is a “quite natural alliance” between Johnson and Farage’s populist, right-wing Brexit Party.

So there you have it, Bannon clearly stating that he’s not only trying to influence Brexit but that he is doing this via Farage. Let’s not forget that Farage was behind the now infamous ‘breaking point’ posters. These were reported to the police as a “blatant attempt to incite racial hatred”. And new evidence about the referendum also links Johnson, Farage with Bannon and other far-right figures.

Interviewer Jon Sopel then let Bannon speak, with few interruptions, about Donald Trump’s racist actions and inherently cruel anti-immigration policies. Bannon spoke proudly of Trump as “a populist and a nationalist, not simply a Republican”.

Labour’s David Lammy led the criticism and called Bannon out for what he truly is:

Why is Steve Bannon an avowed white supremacist, anti semite racist given almost 15 mins uninterrupted airtime on @BBCr4today ? Why was he not challenged on his links to Boris Johnson? Why should I pay my licence fee for this normalising of extremism?

There is no possible excuse or reason that would justify allowing Steve Bannon onto national British radio. What the fuck is going on at the Today Programme?

Why is @BBCr4today allowing Steve Bannon to deliver a constant stream of misinformation and falsehood almost completely unchallenged on Boris Johnson, Farage, Brexit, Trump, immigration etc. This isn’t an interview it’s a rant and Jon Sopel is nowhere.

The very definition of how *not* to interview Steve Bannon. He's a master of propaganda and he's got the BBC to interview him beside his home-made border fence (another PR stunt) with a military-style jeep parked conspicuously in the picture. https://t.co/GKj5KavI2f

.@BBCRadio4 continues to give airtime to the #FarRight – item now on a Bannon organised “symposium” on the US / Mexican border. Is anyone surprised to learn that Bannon supports our new Prime Minister? How connected is he into the far right, populist network?

Sopel interviewed Bannon near a privately funded wall on the US/Mexico border – Bannon’s supported the project from the outset. In May, armed vigilantes from a known hate group chased and captured people coming across the border as building started. This same group was implicated in assassination plots.

When questioned about Trump’s hideous policy of separating children from their families at the border, Bannon claimed the answer was to build more walls. When asked directly about Trump’s inherently “racist’ actions, Bannon replied:

That’s the mainstream media just… blowing it up… it’s actually anti-racist. What… Trump is trying to do is protect African American and Hispanic workers and people in these cities. That’s not racist.

And when asked about Trump’s viciously racist attacks on four US congresswomen of colour, including Ilhan Omar, Bannon stated:

He was making a point… It’s not racist… I actually think she [Omar] helps us because she’s so anti-American.

To be fair, Sopel did challenge Bannon on the hideous chants against Omar at a Trump rally. But Bannon used racist propaganda to dodge the question. “It’s not racist,” Bannon claimed, to chant “send her back”.

This isn’t the first time the BBC has given racists a platform. But it marks a new low. Because, as Lammy also noted, there’s huge danger in “normalising… this evil for broadcast ratings”:

So many men women and children died fighting the virus of fascist extremism in the 1930’s and 40’s. Don’t be fooled by the normalising of this evil for broadcast ratings and political opportunism. Damn Steve Bannon. We need to beat them again. #r4today https://t.co/hlOszLnAbd

Racist nationalist leaders and supporters grow bolder by the day around the world. And far from calling that out. The BBC, it seems, has no issue having a cosy chat with a man whose life’s work is to champion and support that rise. That’s sickening, disgusting and dangerous.