Why is the Telegraph arguing with Muslim women over Boris Johnson's 'racist remarks'? - The Canary 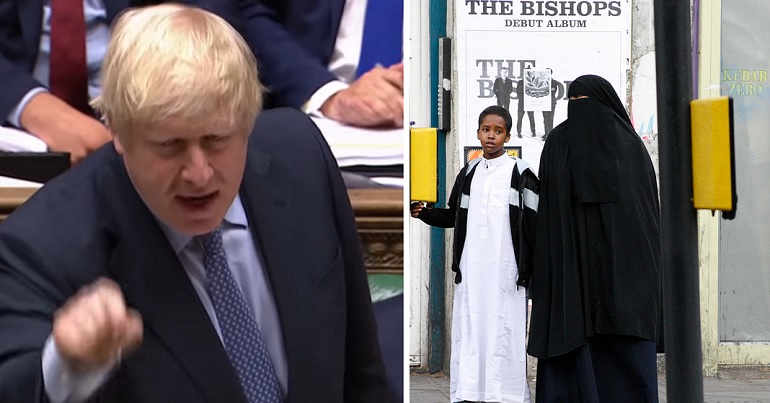 Earlier this week, MP Tanmanjeet Dhesi stood up in parliament and asked the PM to apologise for his racist comments on Muslim women. The video of his impassioned speech has gone viral.

Dhesi’s demand came in response to the news that hate crimes against Muslim women went up 375% following the PM’s remarks. He said in his speech (0:21):

For those of us who from a young age have had to endure and face up to being called names such as towelhead or Taliban… we can appreciate full well the hurt and pain felt by already vulnerable Muslim women when they are described as looking like bank robbers and letterboxes. So rather than hide behind sham and whitewash investigations, when will the prime minister finally apologise for his derogatory and racist remarks… which have led to a spike in hate crime?

Who should come to Johnson’s defence, however, but the good people at the Telegraph themselves? After all, this is the same outlet that published Johnson’s inflammatory op-ed in the first place. For them, apparently an astronomical spike in hate crime against Muslim women is not enough to describe Johnson’s comments as ‘racist’. Turning Dhesi’s demand into a partisan criticism of Labour, the outlet said on Twitter:

Labour has often deliberately misunderstood Boris Johnsons's article on the use of burkas – it wasn't racist, it was a nuanced defence of liberalism.

That the Telegraph feels entitled to tell Muslim women what is and isn’t racist is unsurprising. Unfortunately, the British mainstream media denying and questioning Muslim women’s lived experiences is nothing new.

When Boris Johnson first made his remarks about the burka in August 2018, I described them as “boldfaced hate”.  As misogynistic and racist. In light of the news that Johnson’s words led to a spike in hate crime against Muslim women, it’s important to reflect on their implications. Because he isn’t merely an accidental racist, but someone who knows that attacking a marginalised group will strengthen his fan base:

Being referred to as ‘oppressed’, ‘ridiculous’, a ‘bank robber’, or a ‘letterbox’ is not merely offensive; it is traumatising and humiliating. And to humiliate a group of minority women in this way is a calculated move which sends a message to Johnson’s right-wing followers, making it clear whose side he’s on.

With popular opinion appearing to move increasingly towards the right, defending marginalised groups is an unpopular position. It doesn’t win votes and it doesn’t guarantee seats in parliament. Because these marginalised groups don’t have the numbers to help you win an election. Politicians like Dhesi standing up for Muslim women is therefore a commendable act. Doing so doesn’t serve their careers, but it does demonstrate their integrity and commitment to serving the most vulnerable and marginalised groups in society:

Attack me all you want @Telegraph but can't hide from fact your @BorisJohnson racist article led to 375% increase in anti-Muslim hate crime. Debating liberalism 👍🏼 but using dehumanising remarks 👎🏼makes it less safe for minorities. Words have consequences!https://t.co/MvK5e6E28Z

Boris Johnson’s comments are not exceptional, but among a long list of similar Islamophobic comments from Conservative politicians. For anyone who has been on the receiving end of their bigotry, we need to examine the alternatives and make an informed choice at the next general election, whenever it happens.