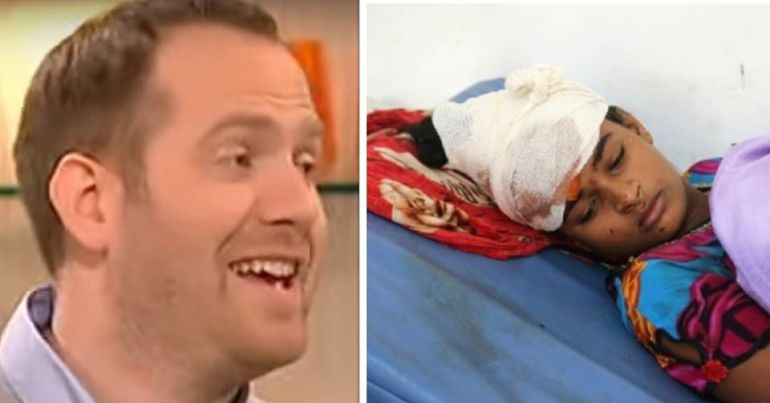 Celebrity chef Bryn Williams is facing a backlash. The Canary found he will be providing a slap-up meal at one of the biggest arms fairs in the world.

The Welshman will be dishing up £150-per-head dinners at the Defence Security and Equipment International (DSEI) arms fair in London.

Anti-arms campaigners have accused Williams of looking to ‘profit from death’ by putting on the feast at the controversial event.

DSEI takes place every two years at the ExCeL centre. It describes itself as:

Several countries on the UK government’s own human rights watchlist will attend. Nations accused of war crimes, including Israel and Saudi Arabia, are also on the invite list. This is despite UK courts ruling arms sales to Saudi illegal this summer.

As The Canary reported, between 9 and 11 April, the UK government faced a judicial review over its continuing arms exports to Saudi Arabia. It investigated whether the UK was supporting ‘serious violations of international humanitarian law’ because these arms have been used by Saudi Arabia in its ongoing war on Yemen.

Scores of protesters have been arrested at the set up of the fair this week. Protests are expected to continue throughout the duration of DSEI.

I am sure we would all rather our public money was invested in feeding our children and caring for our elders. This is the message we have to get over when we oppose this arms fair: we are talking about supporting values that dignify all our communities and our society, not backing profit from death and untold suffering.

The lavish menu at DSEI will be based on meals from his Porth Eirairs restaurant in Colwyn Bay.

The Welshman rose to fame in 2006. Williams won a competition on the BBC series Great British Menu to cook for the Queen as part of her 80th birthday celebrations.

Since then he has appeared on a series of TV shows, including Saturday Kitchen and GMTV. He is the star of a new series currently airing on SC4, Cegin Bryn: Yn Ffrainc.

Heat in the kitchen

The slap-up feast has been condemned by activists who’ve been trying to stop DESI.

I’m utterly disgusted to hear that Bryn Williams is getting rich off the back of mass murder…SC4 should drop his programme Cegin Bryn immediately. He is no role model.

The Canary contacted Williams for comment but none was received by the time of publication.