I think we found the most tone deaf, idiotic plan for post-Brexit Ireland yet - Canary 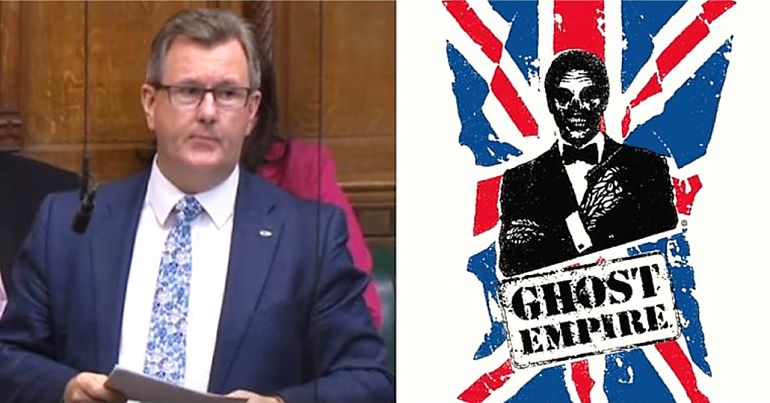 On Saturday 7 September, DUP MP Sir Jeffrey Donaldson suggested Ireland could join the British Commonwealth. Donaldson made his ridiculous suggestion during a debate about relationships on the island of Ireland.

And as there’s so much confusion over the outcome of Brexit negotiations, Donaldson might have thought this ludicrous suggestion was sensible. But given the attitude expressed by close colleagues towards Ireland, it’s hard to believe that. So his suggestion was firmly rejected with the appropriate online mix of logic and laughter.

People online were very much aware of the nonsense in Donaldson’s suggestion. So they couldn’t contain their responses. Some explained quite logically how they felt about the Commonwealth:

Really can't see any benefits of Commonwealth membership. It's a colonial hangover, it is a transnational organisation with an unelected monarch at its head. For any republic to consider membership is ludicrous in my opinion.

Foster has fantasies that DUP dark ages policies will attract young voters cross-community & now @J_Donaldson_MP suggests that Ireland go back into post-colonial English institutions. Foster & Donaldson are desperate to maintain the union which is waning with the demographic.

Lmfao 😂🤣😂
Why should the government of another country, sort out the politics of the United Kingdom for them? Ireland wants to remain in Europe. United Kingdom does not. Simples.

Others took a much lighter approach to Donaldson’s daft suggestion:

Any other suggestions? Jeffrey reckons the Beatles should reform?

i could enter the 100m at the olympics too. Both are as likely

Others then reminded Donaldson just how antiquated his suggestion was:

Facts about the Commonwealth

The Commonwealth describes itself as a “voluntary association” of 53 states. Most of these states are former colonies of the British empire. Ireland left it and became a republic on 18 April 1949.

Ireland, like so many other nations around the world, suffered from the ills of the British Empire. And having fought so long and hard to get out of it, there would just be no sense at all in walking back into it in any form. The DUP and its colleagues created this Brexit shambles, so it’s their job to put it right. Not the job of the Irish.

It’s irrelevant whether it’s the British Commonwealth or a monarchical Commonwealth of any country. Joining such an organisation is a backward step for any democracy. Because no self-respecting democracy should ever have a monarch as its head of state in any form.

And it’s a backward step to a time that never should have been. Irish people and other democracies went through so much misery and lost so many lives to be free of monarchy. There’s no sense in giving all that up now, or at any stage in the future, to compensate for Tory / DUP chaos.