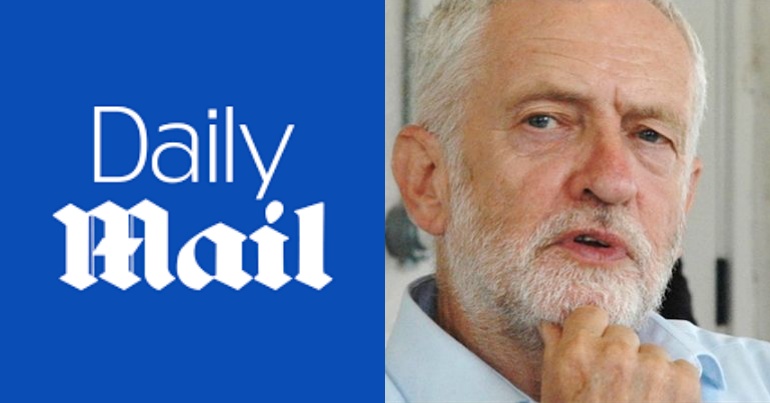 The Daily Mail‘s latest efforts to smear Jeremy Corbyn are a new low. With this ‘shocking scoop’, its latest claim against the Labour leader shows just how desperate the right-wing press is getting.

On 9 September, a Mail “exclusive” claimed that “never-before-seen photographs” link Corbyn and John McDonnell to an IRA ‘terrorist’.

It ran pictures of Corbyn and McDonnell “smiling for the camera” at Paul Hill’s wedding in 1988. It claimed that Hill was “a convicted IRA bomber at the time”.

But this desperate effort to smear Corbyn got short shrift. Because despite trying to link Corbyn and McDonnell to the IRA, even the Mail had to acknowledge that – a year later – the Guildford Four (which included Hill) had their convictions quashed. They were freed immediately.

So as many people pointed out, the Mail ‘scoop’ simply showed Corbyn at an innocent man’s wedding:

So you at the @DailyMailUK believe that those who have been falsely accused and found innocent should be ostracized from society. Tells you everything you need to know about the fascism that lies at the heart of the tax-avoiding Viscount Rothermere's newspaper.

That would be the Paul Hill who was wrongly convicted and later totally exonerated of any involvement.
Jeremy Corbyn goes to the wedding of an innocent man.
The Daily Mail really is a bag of 💩💩💩

One Twitter user went even further, calling this smear “a piss poor effort”:

So he was at the wedding of a man he thought was innocent and was subsequently proven right.

As far as smear campaigns go, this is a piss poor effort.

In 1975, Hill, Gerry Conlon, Paddy Armstrong, and Carole Richardson were wrongfully convicted of carrying out two bomb attacks in Surrey.

All four later retracted statements that led to conviction. It emerged that authorities had obtained these “using violence, threats to their family and intimidation”. Hill also gave further details about their ‘brutal’ treatment, saying:

I was stripped naked and threatened with firearms and mock executions. I was told I would be thrown from a window.

In 1989, police evidence against the Guildford Four was shown to have been entirely “fabricated” and based on “lies”.

As some people pointed out, Corbyn and McDonnell actually stood by the four. Both backed the campaign to prove their innocence:

The weirdest Daily Mail report : Unearthing photos showing Corbyn & McDonnell were, bravely, 100% right ,when they stood against the crowd : Corbyn & McDonnell rightly helped free Paul Hill and the Guildford 4 from jail, backing their succesful campaign to prove their innocence https://t.co/xdxp3JxvQt

Others, meanwhile, suggested this should lead to legal action:

Four innocent men, tortured into signing false confessions, wrongly convicted, tortured while imprisoned for crimes they didn't commit. Then acquitted. Take this down. You're fucking disgusting. I hope the families of the #guildford4 Corbyn and McDonnell sue your asses for this. https://t.co/W3l8FRhx7K

The danger of right-wing smears

The Mail‘s latest effort to smear Corbyn was desperate and empty. Yet it prompted outrage from readers desperate to fuel anti-Corbyn hatred:

The comments under this story show what happens to your critical thinking skills if you read the Daily Mail.

In fact, the Mail later appeared to close the comments section on this story.

This is just the latest smear against the Labour leader. Yet it has serious consequences. As The Canary reported, police arrested far-right agitator James Goddard outside a Corbyn rally on 2 September. And many people linked this to the ongoing right-wing media attacks on Corbyn and other left-wing figures.

While this latest Mail smear is both deceitful and pathetic, that doesn’t mean it’s any less dangerous.