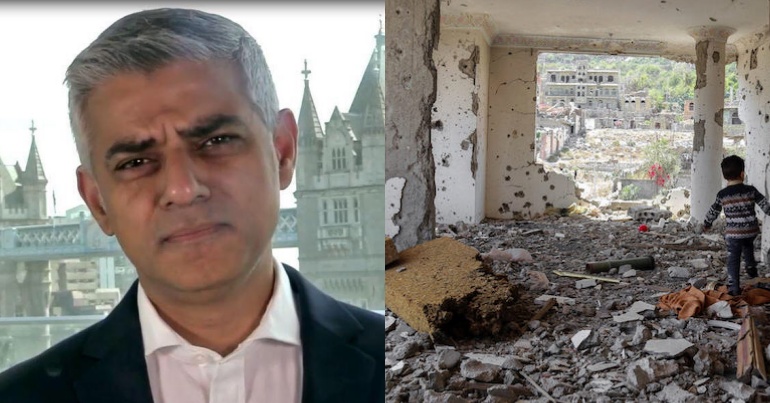 London mayor Sadiq Khan has spoken out against the world’s largest arms fair. As protests continue against the Defence Security and Equipment International (DSEI) arms fair, Khan’s open letter also makes the link between the “arms and weapons” being sold and the people who’ve fled conflicts where such weapons are used.

“Prevent this event from taking place”

DSEI takes place every two years at the ExCeL centre in London. It describes itself as:

In a letter to DSEI event director Grant Burgham seen by the Independent, Khan said he “strongly” opposed “this event taking place in London”. He continued:

London is a global city, which is home to individuals who have fled conflict and suffered as a consequence of arms and weapons like those exhibited at DSEI.

I will take any opportunity available to prevent this event from taking place at the Royal Docks in future years.

The London mayor stated that he is “opposed to London being used as a marketplace for the trade of weapons”. In response, Burgham claimed DSEI:

plays an important role in supporting the Ministry of Defence’s procurement needs, helping deliver British jobs and economic growth, and deepening the UK’s partnerships on a global stage.

Action and protests to stop DSEI started on 2 September. As The Canary reported, there’s a large police presence in place.

According to the Independent, Khan also called on the arms fair organisers to fund the cost of policing demonstrations against the arms fair. It also stated:

More than 2,800 police officer shifts were needed to cover the 12-day operation.

Sources on the ground told The Canary that, so far, there have been around 115 anti-arms protester arrests.

The best way for the government to cut the policing cost would be to shut down DSEI.

DSEI is a moral disgrace and should be firmly opposed, whether it is taking place in London or anywhere else.

It will bring a roll call of the world’s most repressive regimes together with all of the biggest arms companies. They will be there for one reason: to sell as many weapons as possible, regardless of the consequences.

Government agencies responsible for enforcing the law at DSEI are on site during setup and throughout the exhibition.

He claimed DSEI would meet “all security costs incurred as a direct result of the event”. And he told the Independent that organisers “fully respect the right to lawful protest”.

Activist action against DSEI is ongoing. On 9 September, CAAT shared images of a giant banner placed opposite ExCeL:

Amazing action with a 30x20m(!) banner opposite ExCeL London this morning, where one of the world's biggest arms fairs is due to open #StopDSEI pic.twitter.com/20Z5enZQPV

Through hosting DSEI our government is culpable for the killing and suffering of innocent civilians worldwide; State sanctioned terrorism.