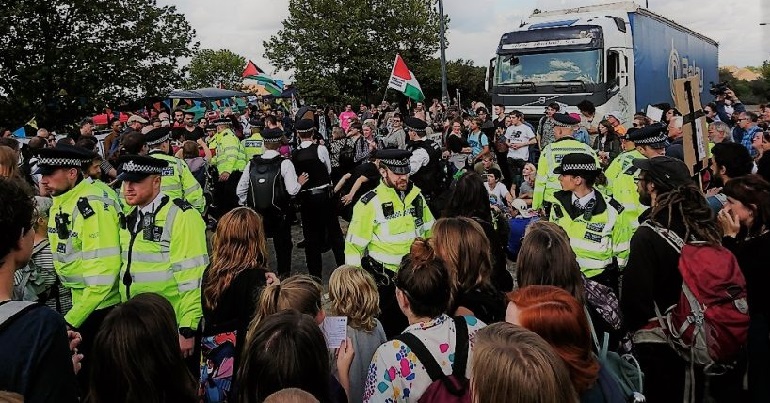 From 2 to 8 September, hundreds of people attended protests outside the gates of the upcoming DSEI arms fair in London. Around 116 demonstrators have reportedly been arrested in the last week for blocking trucks from entering the ExCeL centre. The protests were aimed at preventing the setting up of the arms fair before it started.

DSEI is the world’s largest arms fair, attended by 34,000 people. State and military delegations from regimes including Israel, Turkey, Bahrain, and Saudi Arabia come to London to shop for weapons. Many of these countries are included in the Foreign Office’s own list of “human rights priority countries” – a bland euphemism for human rights abusers.

Nevertheless, DSEI enjoys the full backing of the UK government. The participants at DSEI are invited by the Department for International Trade Defence and Security Organisation (DIT DSO).

A diversity of people

A broad range of people have attended the week of protest action. From residents of Newham, ashamed that their borough is being forced to host the fair, to Bahraini dissidents, Kurdish revolutionaries, and their supporters.

And a diversity of tactics

The tone was set on Monday 2 September, as people ‘locked on‘ in the road to stop the first trucks of the week. The protesters used arm tubes to prevent the police from moving them. Countless ‘lock-ons’ have been used throughout the week to prevent the movement of weapons into the ExCeL centre.

Faith groups, meanwhile, held a mass prayer vigil in the road on Tuesday. 30 people were arrested for refusing to move out of the road before their prayer meeting had finished. The Network for Police Monitoring criticised the police’s decision to arrest, saying:

Any restrictions on people’s rights to freedom of thought, conscience and religion must always involve careful and proportionate decisions by the police. There was little sign of either yesterday.

Anti-nuclear protesters set up elaborate roadblocks early on Wednesday morning. Protesters used a car, a van, and a boat at the east and west gates of ExCeL to block all deliveries to the site well into the afternoon.

Learning from each other’s struggles

The week of action has been a unique opportunity for those resisting to learn from each other’s struggles. For example, supporters of the Rojava revolution in northern Syria held a workshop discussing how to support and learn from the radical ecological work going on there.

People also climbed on top of trucks to stop the weapons being delivered. In one case, a protester stopped a lorry in its tracks by locking themselves to the vehicle’s chassis with a thumb-lock device.

On Sunday, a group of 20-30 people took part in a blockade of DSEI’s east gate. Their protest was part of a themed day of action against DSEI’s sale of border control equipment.

On Tuesday 10 September, the exhibition is set to open its doors. If it goes ahead, it will do so against the wishes of the hundreds of people, from diverse backgrounds, who have joined the blockades in the last week. These are people who’ve been willing to defy police repression and risk arrest and injury to stop this arms fair. And they deserve our full solidarity and support.