Thousands march for an Independent Wales in Merthyr Tydfil - The Canary 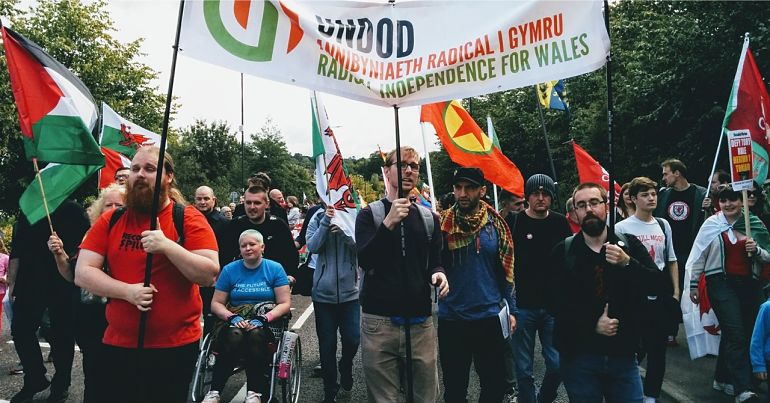 Over 5,000 people took to the streets of Merthyr Tydfil on Saturday 7 September to call for Welsh independence. This was the third mass demonstration for an #IndyWales this year.

In July, at least 8,000 supporters of an independent Wales marched through the streets of Caernarfon. The number of demonstrators had doubled since an #IndyWales march in Cardiff in May.

The numbers on Saturday were lower than on the last demonstration in Caernarfon. This is unsurprising, as Caernarfon has one of the largest proportions of Welsh speakers in the country. But the march was particularly significant, because it brought thousands of people together calling for independence in a Labour stronghold. The Labour party has historically ignored or opposed calls for Welsh independence. But there are new signs that debate is emerging within the party.

Welsh independence is a “viable alternative”

We had marchers from Rhondda, Cynon and the Gwent Valleys and the Caerphilly area. And I spoke to one man at the march who was going to set up a branch in Blackwood…

All Under One Banner Cymru spokesperson Llywelyn ap Gwilym said:

With the anti-democratic mess that is currently happening in Westminster, it is more important than ever for Wales to make its voice heard, and for the people of Wales to realise that there is a viable alternative: independence.

If we want real democracy, we have to create it

The movement for independence is gaining popularity in the face of the baldly undemocratic developments in the British parliament. Undod (which is Welsh for ‘Unity’) sent out a tweet about the current attempts to suspend parliament by Boris Johnson:

Undod is a “democratic, non-hierarchical, republican movement” calling for a radical independence for Wales. Undod told The Canary that it organised a ‘radical bloc’ at Saturday’s march in Merthyr.

Mainstreaming the movement for independence

The mainstreaming of the idea of Welsh independence can be seen by the fact that on Sunday 8 September the BBC reported comments made by former-Labour Party MP Gwynoro Jones that discussions about Wales’ future should be had, just like in Scotland and Northern Ireland.

“The time has to be now”

Plaid Cymru MP Delyth Jewell said during a speech at the Merthyr demonstration:

I grew up in these valleys and ever since I was a teenager I knew that one day Wales would be an independent nation. But the events of recent years, months and even weeks have lead to this growing, rumbling, crescendo of realisation that that time has to be now.