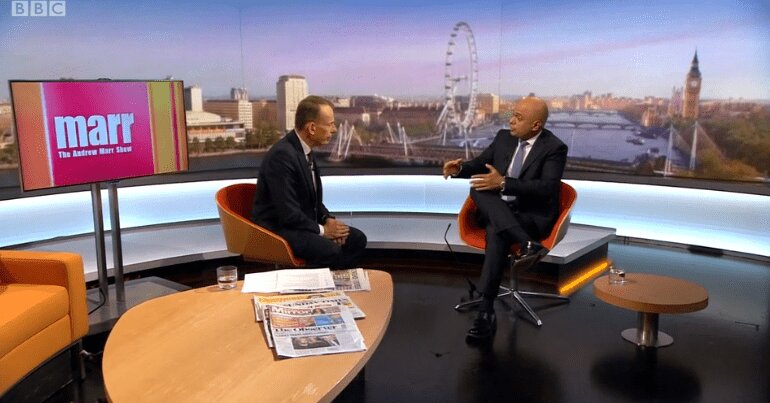 An opposition bill designed to prevent a no-deal Brexit is close to becoming law. The bill would effectively force Boris Johnson to ask for an extension should he not pass a withdrawal agreement before 19 October. The extension would be until 31 January 2019.

The law has been through both the Commons and the Lords and is due to receive Royal Assent, where it would become official, on 9 September.

The incoming legislation appears to force Johnson and his government into a corner. On the BBC, Marr asked Javid:

If the law says that he must ask for an extension, what are his options?

The law talks about October 19th in case there is no deal agreed… should we get to that position… of course we will obey the law, but we will look at our options

So on October 19th, after that council, the prime minister would ask for an extension because that is the law of this country.

But then Javid contradicted himself, as he had asserted the opposite:

And Marr called out the clear contradiction:

The government’s position is that ‘we will obey the law, but we won’t do what the law tells us to do’… Explain what’s wrong about what I’ve just said

Isn’t “the prime minister will absolutely not be requesting an extension AT THAT MEETING” (my emphasis) an interesting thing to repeat twice verbatim? pic.twitter.com/rbkfrAENR7

On the show, the Chancellor could then only retreat into contradictory mental gymnastics:

the prime minister will go to the council meeting on the 17th and 18th. He’ll be trying to strike a deal. He absolutely will not be asking for an extension in that meeting… The bill talks about the 19th being an important date. And at that point we will consider our potions. But our policy is clear, it is unchanged, we will be leaving on October 31st.

Another issue with Johnson and Javid’s position is that the government cannot negotiate a new Brexit deal.The hard border between Britain and the UK has to be either within Ireland or in the Irish sea. The first option is unacceptable for Ireland itself, which has a veto on any deal. The second is unacceptable for the Democratic Unionist Party (DUP), which the Conservatives rely on to govern. So there is no solution to avoiding a hard border other than a ‘soft Brexit’ permanent customs union combined with a level of single market regulatory alignment. And Johnson’s hard-Brexit base won’t accept such a close relationship between the UK and the EU.

Meanwhile, on Sky’s Ridge on Sunday, Labour’s legal spokesperson Shami Chakrabarti spoke out against the possibility that the government will break the law:

I think it’s extraordinary… The idea that a sitting prime minister in one of the oldest democracies on the planet would say, ‘I will ignore the law’… I think the position is irresponsible and elitist. The idea there’s one law for Boris Johnson and his mates and another law for everyone else

what they would say is that they are trying to enact the will of the people, that they’re trying to do what parliament is trying to block, which is to carry out the result of the referendum.

I’ve heard what they said… but every tin pot dictator on the planet throughout history has used the excuse of having the people on their side to break the law, to shut down parliament… It’s absolutely extraordinary.

On Marr, Javid was trapped in a corner. The government cannot deliver an alternative Brexit deal because it has no solution to the Irish border. At the same time, it looks like it cannot deliver no-deal because the opposition bill prevents it. That left nothing short of a slow motion car crash.