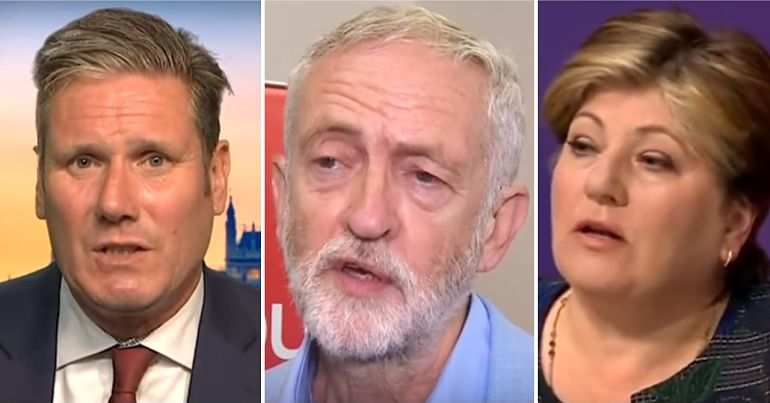 The centrists who’ve taken control of the Labour leadership’s Brexit strategy are playing a dangerous game. Again on 9 September, the Labour Party abstained instead of voting for a general election. This only kicks the can further down the road, pushing us closer towards a no-deal Brexit when parliament returns on 14 October.

The Labour right would blame Corbyn for this. On top of that, the safest way to prevent no-deal is precisely through Corbyn winning a general election.

Corbyn goes against his instincts

Jeremy Corbyn’s political instincts, which have an impressive record, would’ve resulted in Labour voting for an election the first time. But as Polly Toynbee writes in the Guardian:

Opposing a general election was a difficult hurdle for Corbyn: he, like all opposition leaders, called for one every day. (It’s said the absence of his strategy chief, Seumas Milne, on a prolonged holiday greatly eased the process of persuading the Labour leader…) But the need to prevent Johnson calling an election across the Halloween tripwire date was paramount. The good sense of Keir Starmer, working with John McDonnell and Emily Thornberry, has nudged Corbyn a long way.

Toynbee’s centrist gymnastics are way off. It’s not only that: the line that ‘Corbyn should oppose a general election to prevent no-deal’ doesn’t add up.

The opposite is true. Corbyn winning that election is the most effective and democratic way to prevent no-deal and bring about a mandate to remain through Labour’s proposed second referendum.

‘No-deal’ is Johnson’s vote bait, why cast it aside?

Firstly, the warnings about Johnson and his key strategist Dominic Cummings delivering no-deal during an election campaign make no sense. That’s clear when you consider that Johnson is not some passionate Brexiteer. In fact, he was arguing for Remain up until February 2016 – only a few months before the referendum:

Johnson’s only concern is saving the Conservative Party and exploiting Brexit sentiment for votes. Why would he throw away his only leverage by delivering no-deal during the campaign? Then there would no longer be a reason for Brexiteers to vote for him. Plus the economic impact of no-deal would electorally damage the Conservative Party more during the campaign itself.

‘We can’t trust Johnson, though’

Still, perhaps you believe Johnson is too unpredictable and could “call an election across the Halloween tripwire date”, as Toynbee characterises it. On this view, delaying an election remains a pointless can-kicking exercise.

Because there is only one way to prevent Johnson doing this. And that’s opposition MPs voting no confidence in Johnson and then voting in a temporary Corbyn-led government, which would set the time scale for the election. Opposition MPs could have already done this.

Any other route to an election could enable the Conservative leader to exploit the campaign timing to bring in no-deal, as per the Fixed-term Parliaments Act:

Likewise, any opposition legislation that should force Johnson to seek an extension to 31 January only kicks the can further down the road. Again, only a Corbyn-led interim government could stop him setting the election date after January 2020, forcing through no-deal.

Legislation ‘banning’ no-deal doesn’t work either. Post-election, Johnson could simply repeal that legislation if he won his no-deal majority.

The safest lasting way to prevent a no-deal Brexit is, as previously mentioned, Corbyn winning the election.

Centrists such as campaigner Femi Oluwole, meanwhile, argue for a second referendum first. This would both strain UK democracy further and increase the risk of Leave winning. By contrast, once people have voted for a second referendum with Remain on the ballot through Labour’s manifesto, there would be a legitimate mandate. Otherwise you’ve got an unelected Corbyn-led opposition forcing a second referendum on the country without any accompanying offer to invest in public services and end the corrupt neoliberal system that led to Brexit.

The other argument: ‘Opposing an election is strategic’

So now we reach the final rhetorical frontier: ‘Look, it’s not actually about preventing no-deal. It’s about the symbolic damage that Johnson missing the 31 October deadline will do to his party’. There is some polling to support this. Labour leads on 28% versus the Conservatives on 26% when pollster ComRes asked people about their voting intention post-another Brexit extension.

The thing is, that’s the same ComRes that got the result of the 2017 general election wrong by almost 10 points. In that election, Labour went from over 20 points behind at the start of the campaign to almost winning. The idea Labour should be strategising around pre-election polls is podcast dad-level politics. This comes into sharper focus when you consider that 57% of 2017 Labour voters selected the party within a month of election day. In other words, Corbyn’s Labour won well over half of its vote share in the four weeks before 8 June. Questionable polls ahead of the election made next to no difference. The mobilisation of a mass movement did.

Now we’ve broken through the rhetoric, the bottom-line should be clear. Many centrists don’t want Corbyn to vote through a general election because they don’t actually want him in Downing Street. As soon as the Lib Dems and Labour right wingers are done with exploiting Corbyn as a vehicle for continuity Remain, they will turn their fire on him again. The ‘Labour antisemitism crisis‘ smear campaign will come back. And the Labour left will have lost its leverage over the centrists – i.e. ‘support us in an election to help prevent Johnson’s no-deal’. This could keep a number of them onside.

Either that or listening to the centrists brings no-deal and another coup against Corbyn and the Labour left from the right of the party and corporate media as they try and blame him for the Brexit mess, again.

Parliament is already suspended. Nonetheless, the Labour leadership should immediately sideline the centrists and focus on its own priorities: actually stopping no-deal, delivering a Green Industrial Revolution, and ending austerity. Continuing to align with these people only ropes the Labour leadership into their dangerous and short-sighted games.