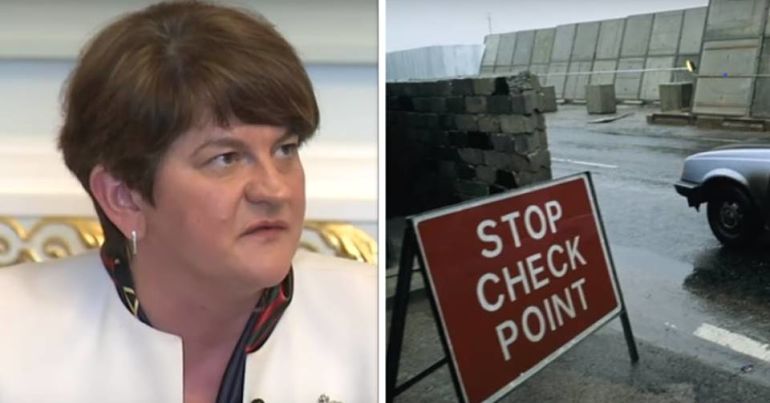 The DUP’s Jim Wells has revealed a possible shift in his party’s position on a “Northern Ireland-only backstop” agreement. Should it become official DUP policy, Wells’s revelation would mean the DUP has effectively accepted the backstop agreement. This is something it said it would never do.

His revelation came in a pre-recording of Stephen Nolan’s Top Table that goes out on BBC1 this evening, and in response to a statement from the host that “we would be living to EU rules, Jim”.

we would be aligning ourselves voluntarily with European rules, yes.

This is particularly shocking as the DUP has consistently opposed the backstop and “’special status’ for Northern Ireland” in Brexit negotiations. Yet even more shocking is that the DUP publicly and recently confirmed this opposition after meeting Boris Johnson on 10 September:

Its statement includes the line:

But Jim Wells is a Unionist MLA in the Northern Ireland Assembly. And his statement is in keeping with the apparent softening of the DUP/Tory position, as reported by The Canary.

This led to reaction from hard-line loyalism. And it showed the utter shock waves Wells’s statement sent through the loyalist heartland:

The proposal articulated by Jim Wells on @StephenNolan is preposterous – the DUP need to think again. The grassroots unionist community will never accept such an outrageous suggestion. We need to hear from Arlene Foster on what the DUP’s policy actually is!

Jim Wells does not represent the DUP – they have even withdrawn the DUP whip from him. The Nolan Show interviews him to damage the DUP!!!

But despite having the whip withdrawn, he’s still an elected MLA.

But the response online suggested that nobody was buying it. Because it really does seem like a massive DUP U-turn.

O the empire is crumbling 🎼😆☘️🇨🇮

It won't matter what the Dup's policy is. The UK Gov will not damage future trading with EU to keep people happy over here. Brois has already mentioned alignment in parts with the South. Its only a matter of time now its very close, backstop reworded differently coming.

While Wells might only be ‘floating’ this idea at the moment, it’s big news that a loyalist politician would do even that much. And in fact, the DUP may just be facing the reality of what it’s led itself into.