We need to talk about what happened on Newsnight. Because it's not ok. - Canary Workers’ Co-op 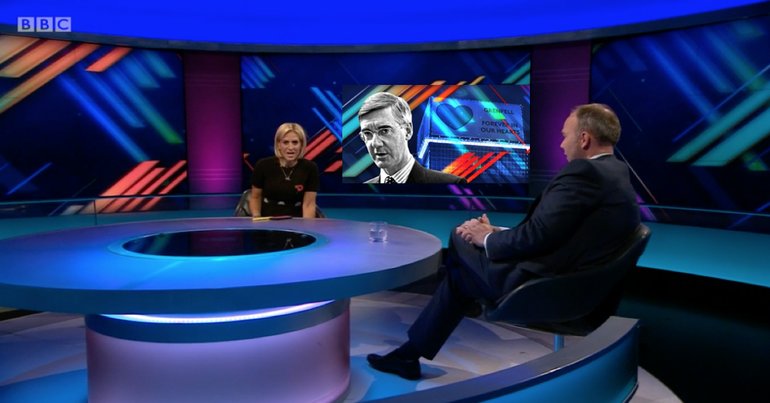 Last night’s BBC Newsnight presented a ‘moderate’ Conservative peer criticising Jacob Rees-Mogg for his disgraceful comments over Grenfell. What they forgot to mention is this ‘moderate’ Tory peer was housing minister shortly before the fire. His name is Gavin Barwell, and he is considered one of those chiefly responsible for the conditions that led to the tragedy.

5 November was a bad news day for the Tories.

The day began with outrage at Jacob Rees-Mogg arguing men like him wouldn’t have died at Grenfell because they’d know better. We’ve covered that mess, so we won’t rehash it here.

Later, Tory MP Andrew Bridgen tried to clear things up, but only managed to make them worse.

Few things shock me about the Tory party. Jacob Rees Mogg’s comments earlier were shocking. But this is something else, as Tory MP Andrew Bridgen doubles down on the idea that Rees Mogg would have survived the Grenfell fire because he’s ‘clever’: pic.twitter.com/ztoyU4q7Px

And so to BBC Newsnight to remind us that not all Tories merrily shit on victims of tower block infernos. Enter Lord Barwell. He said he was “horrified” by Rees-Mogg’s comments, comparing them to the mistreatment of Liverpool fans killed in the Hillsborough disaster. But when asked if Rees-Mogg should resign, he responded:

At this point, presenter Emily Maitlis could and should have jumped in and turned this interview into something serious. Because Barwell himself faced calls for resignation over Grenfell. And he did a lot more than say something stupid. But she carried on as if Barwell was a neutral figure.

On 14 June 2017, a fire broke out in Grenfell Tower that would end 72 lives. The building had no sprinklers, or other fire safety precautions that would have saved many if not all of these people. Worse, the fire was accelerated by combustible cladding on the outside of the building. The man responsible for building safety in the year before the fire was Tory housing and planning minister Barwell.

It later emerged Barwell had ignored multiple safety warnings in the run up to the fire. As Inside Housing reported:

Gavin Barwell, who was housing minister in 2016 and 2017, received seven letters from the group of MPs responsible for scrutinising fire safety rules between September 2016 and May 2017 – with the last landing just 26 days before the fire at Grenfell Tower.

The letters warned of the risk of a deadly fire and called for a promised review of building regulations and fire safety to be carried out to prevent it.

But Mr Barwell sent just three short replies during this period and became so bad at replying that the group resorted to sending their letters by recorded delivery.

Barwell lost his seat in the 2017 general election. Four days before the fire, Theresa May installed the recently unseated Barwell as her new chief of staff. Newly elected local Labour MP Emma Dent Coad made repeated calls for Barwell to resign from Number 10 for his part in the disaster. But Barwell ignored the calls to resign in much the same way he’d ignored the warnings about Grenfell. And he was rewarded. Not only did May stand by him, she later made him Lord Barwell in her infamous crony honours list of 2019.

None of this was mentioned on Newsnight. And this is how reputation laundering works.

Just like criminal operations need people to launder their money, compromised public figures need media outlets to launder their reputations. Someone needs to take the dirty and make it clean. Appearances like this, with Barwell presented as a compassionate and credible voice, are how this happens. As campaigner Joel Benjamin points out:

The time BBC #Newsnight thought it appropriate to ask ‘Lord’ Barwell, who as Housing Minister, sat on fire reports that could have prevented #Grenfell🔥his opinions on Rees-Mogg comments.#BBC reputation laundering at its finest. https://t.co/m1zsjTv4Q0

Benjamin was far from alone in pointing to the wholly inappropriate nature of the interview.

I'm absolutely staggered beyond words that of ALL people the BBC invites on to sanitise Jacob Rees Mogg's despicable comments, is Barwell, who is in part responsible for #Grenfell. The BBC are colluding openly with the Conservative party.#Newsnight
Barwell should be in prison https://t.co/nfaxpQrLM5

The former housing minster (now Lord! 😶) who ignored the warnings from Lakanal House, which could have prevented #GrenfellTower pontificates on JRM and 'accountability'

We are through the Tory looking glass #Grenfell #Newsnight #GeneralElection2019 pic.twitter.com/3PjEs6Oc96

It simply beggars belief that any honest interviewer on any outlet would fail to address these issues. Maitlis has the experience and skill to eviscerate Barwell at this point. She could have said:

By your own logic Lord Barwell, do you believe you should have resigned? Do you consider ignoring multiple calls to review fire safety guidelines in the run up to an inferno that killed 72 people ‘doing something serious’?

But she didn’t. Because that was not the purpose of the segment. It was not news, it was reputation laundering for the Conservative Party in general and Barwell in particular. What’s worse is licence fee payers footed the bill for it.