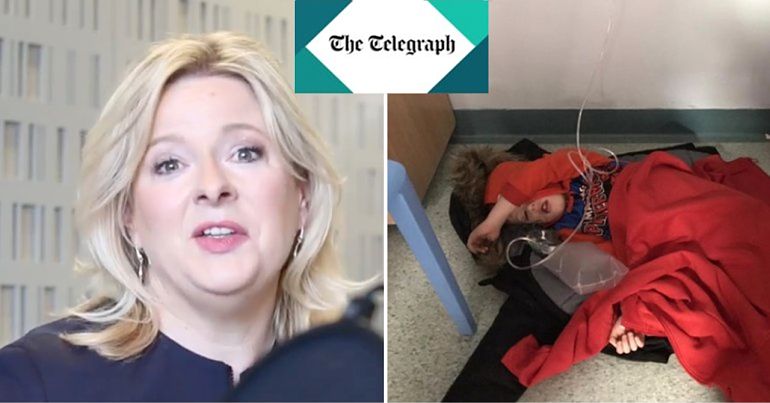 A four-year-old boy with suspected pneumonia was forced to sleep on the floor of an under-resourced, overworked NHS hospital. The image released of that boy shook voters and made them think twice about voting for the party responsible, Boris Johnson’s Conservatives. But one right-wing journalist claimed she was about to expose the whole story as an elaborate stunt. That was until her “source” appeared to be nothing more than a right-wing troll farm.

A bad day for Boris Johnson

Yorkshire Evening Post journalist Daniel Sheridan was sent the picture of four-year-old Jack Williment-Barr by his mother. The shocking image of Jack sleeping on the floor of Leeds General Infirmary went viral and created a tsunami of negative press for Johnson. This was only made worse when a journalist tried to show Johnson the image, only for the PM to wrestle the phone away and shove it into his own pocket:

Tried to show @BorisJohnson the picture of Jack Williment-Barr. The 4-year-old with suspected pneumonia forced to lie on a pile of coats on the floor of a Leeds hospital.

The PM grabbed my phone and put it in his pocket: @itvcalendar | #GE19 pic.twitter.com/hv9mk4xrNJ

The exchange revealed a prime minister unwilling even to look at the results of his party’s policies.

But soon Twitter accounts began spreading the entirely false rumour that the photo was faked by Labour activists. All the accounts began by claiming to know a member of NHS staff who had revealed the ruse:

If you are indeed sorry, @MattHancock, why are your bots pushing the fake claim that the photo of Jack Williment-Barr was staged, across all social media? https://t.co/LP1ceRch1l

The tweets used identical phrasing and even those without journalism training were able to grasp something was amiss:

But Telegraph journalist Allison Pearson seemed slightly behind the curve. Pearson is the paper’s chief interviewer and author of such fascinating columns as If Extinction Rebellion cut the dreadlocks, they’d get their message to more people. Insightful.

Pearson claimed to be breaking this story herself: 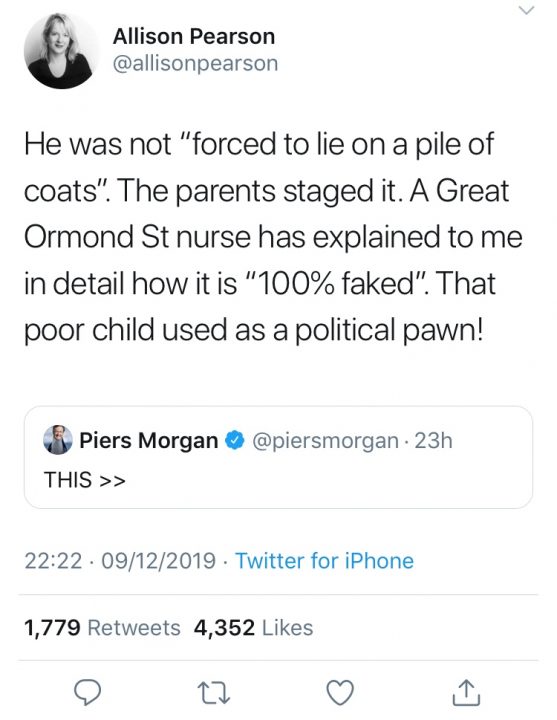 It appears she simply regurgitated one of the tweets as fact. The troll farm activity was reported by Metro, and then broke into a full-scale fake news crisis for the Telegraph.

I feel the need to clarify a few things about this story after seeing some tweets/accounts doubting the basis of it… 1/ https://t.co/r9o43d5bsO

I suppose you’ve seen this by now… pic.twitter.com/QvPrQzr8rc

I was hacked. I am not a nurse and I certainly don’t know anyone in Leeds…I’ve had to delete everything as I have had death threats to myself and my children.

What Pearson did here was unacceptable. She publicly accused a sick child’s family of being liars. She presented the opinions of Twitter trolls as a robust source. And she failed to do even the most cursory research to verify her claims. By doing so she (at the very least) contributed to the harassment of Jack’s family, and the owner of the original Facebook post:

Don’t normally tweet things like this, but: the Telegraph should absolutely sack Allison Pearson for bringing the paper into disrepute – she is either too stupid or too dishonest to do her job and this is far from an isolated incident https://t.co/DcxKeY6vZc

Desperate Allison Pearson must surely be dying of embarrassment right now. She says she's prepared a story on how the boy on the hospital floor is a staged pic, when the hospital themselves acknowledge it is real and have apologised for it. Cringe. pic.twitter.com/EkIpSK0Q0L

This is a failure so immense that it’s almost irrelevant whether it was wilful or an act of gross incompetence. Because either amounts to such shattering stupidity that Pearson should already have cleared her desk.