Journalist drops truthbomb about Corbyn's popularity, right in the BBC's face - The Canary 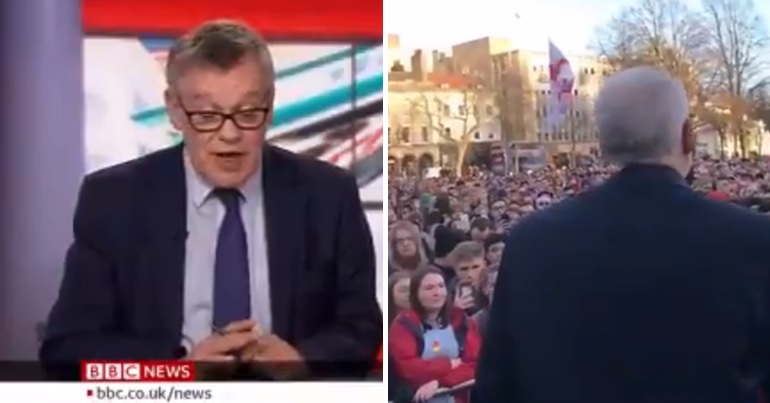 Britain’s “longest serving political editor” has revealed just how popular Labour leader Jeremy Corbyn is among voters, right in the BBC‘s face. And this came just as the public broadcaster faces accusations of consistent pro-Tory bias.

‘A prime minister in waiting whom the public love’

Speaking on The Papers, Sunday Mirror and Sunday People political editor Nigel Nelson said he had been out on the road with Corbyn and that:

I can attest to the fact [that] he is very hard-working.

the public love him… he is extremely down to earth. He’s somebody who’s very easy to get on with. I find he’s got a great sense of humour.

On whether Corbyn is “prime ministerial”, meanwhile, he stressed:

I think if you met him, you would actually say ‘yes’.

wherever he turns up, he’s treated like a rock star. So many people appear out of nowhere. It’s extraordinary.

Finally a truth bomb from the media on how popular Jeremy Corbyn really is. This is from right now – 2019 election. pic.twitter.com/wN6mZTBsFO

The corporate media paints a completely different picture of Corbyn. Whyever may that be?

Even back in the 2017 election, it was clear that Corbyn was immensely popular on the streets. He regularly drew huge crowds across the country. And the same is true this year:

Please I beg you don't make this clip go viral!

The BBC don't want to favour Jeremy Corbyn by showing thousands upon thousands of people at his rally when Boris Johnson just gets booed and heckled instead.

So please don't RT for the BBC and Boris Johnson's sake.

Conservative leader Boris Johnson, meanwhile, has not only been avoiding media scrutiny, he’s also been running scared from protesters across the country. And it seems his party has been trying to dupe voters with dodgy online claims instead:

An independent fact checker has found that 88% of the Tories’ Facebook adverts featured misleading or factually incorrect claims.
They also found that 0% of Labour’s adverts contained misleading claims over the period tested.
Don’t believe the Tories’ lieshttps://t.co/FaNpj1MBUD

Britain’s media, however, has clearly been holding Corbyn and Johnson to different standards. In particular, the smearing of Labour’s veteran anti-racist leader has been endless (despite his party’s very strong record on stamping out racism), while there’s barely been a mention of the Tories’ appalling record on racism. And it’s not hard to work out why this happens. Because billionaires dominate the UK’s media environment, and they have a clear alliance with Johnson’s party. Corbyn, on the other hand, is asking billionaires to pay a bit more tax for the good of society as a whole. So the corporate media’s blatantly anti-Labour position makes perfect sense.

Even the supposedly impartial BBC has faced fierce criticism for its alleged pro-Tory bias, with reporters all too often acting as Conservative propagandists:

It's so rare you get to praise a newspaper nowadays, but well done The National for an honest headline. pic.twitter.com/ZHGLwQvcXB

If @bbclaurak and @Peston don't report the names of 'senior Tory sources' who lied to them yesterday leading to false reporting against @UKLabour, we can fairly conclude that they are actively colluding with the Conservative campaign. #journalism #truth or #collusion

The above is probably why truthbombs are usually confined to minor BBC programmes like The Papers. And that’s why we need to have a healthy distrust of everything the mainstream media and the Tories tell us about Corbyn. Because if we trusted what they say, we could easily think that Johnson is trouncing Corbyn in this election race. But it seems the reality on the ground could hardly be more different.