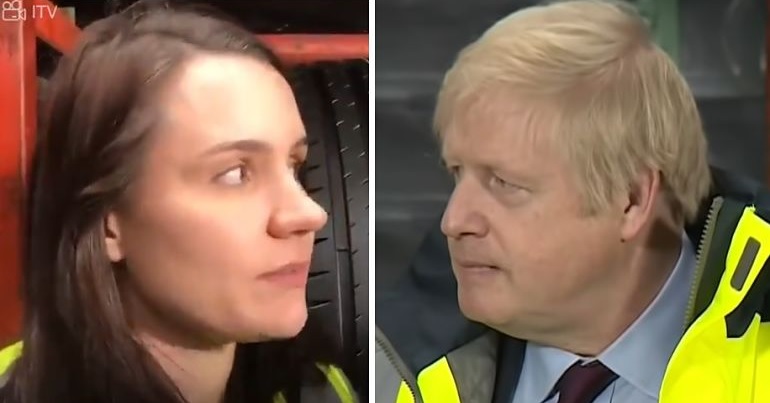 A brave young worker in the Labour heartlands called out Boris Johnson’s bullshit straight to his lying face. Undeterred, the Conservative Party leader continued to spout nonsense, including on issues that threaten the jobs of the very workers he was talking to.

Johnson is running around Labour’s heartlands with disgruntled ex-Labour MP Gisela Stuart in tow. His aim is to persuade pro-Brexit folk that they should put their trust in him, but his past comments and actions suggest they shouldn’t.

One young female worker in North East England was having none of it, though. During a visit by Johnson to Ferguson’s Transport near Sunderland on 9 December, she asked:

If Labour and their manifesto don’t scare the Conservatives, why then was [a] fake website set up and [Google paid] to put them above Labour’s website, so people can’t even find what they’re looking for?

The worker was referring to the Conservative Party launching a website, Labourmanifesto.co.uk, on the day of the Labour Party’s real manifesto launch. The website, which contains false claims about Labour’s financial plans, was also apparently promoted on Google by the party, to push it to the top of the search engine. Meanwhile, earlier in the campaign, the Conservative press office changed its Twitter handle to impersonate a fact checking entity and, again, smear Labour’s plans.

In response to the worker’s question, Johnson said:

I’m afraid the short answer to that question is I haven’t the foggiest idea. But, as far as I understand it, what happens is that there’s an awful lot of activity on the internet to try and promote views of one kind or another. What I can tell you is that if you want to look at our manifesto, it’s there online. It’s a great manifesto, it will take this country forward, and it will enable us to get Brexit done.

This mother was not impressed by Boris Johnson today. pic.twitter.com/aWySjt7Hv7

The notion a Conservative majority government would be able to “get Brexit done” in the timeframe – and under the conditions that Johnson wants – is highly dubious, though. In fact, the Financial Times just revealed that his own Brexit Department is concerned that his withdrawal deal will be a “major strategic, political and operational challenge” to implement.

This isn’t the only false hope Johnson is spreading around the Labour heartlands, however. He’s also saying:

The great thing about the deal that we have ready to go is that it protects businesses, it protects supply chains, it means we leave the EU with our relationships absolutely intact, so we have a zero tariff, zero quota relationship with the EU as we come out.

Any person would reasonably take this to mean that Johnson had already agreed such a “zero tariff, zero quota” relationship for post-Brexit Britain with the EU. He hasn’t. Whether such a relationship happens will be decided during trade talks with the EU. Those trade talks don’t begin until after the Withdrawal Agreement passes in parliament, which Johnson wants to get done at the end of January 2020.

Johnson has previously been more candid about what he means by this, explaining that “because we have a zero-tariff, zero-quota position now” as a member of the EU, he’s confident the EU will agree to a continuance of that. The EU itself, however, argues that’s entirely dependent on what else Johnson agrees to in the trade deal.

The BBC‘s Europe editor says that Johnson will have to cross the “red lines” he currently has to get even the most basic of trade deals, so him achieving what he’s promising these workers is hardly, at this stage, guaranteed:

And you’ll hear the only way Johnson really has chance of getting bare bones FTA with EU done and dusted by Christmas next year is if he crosses his own red lines again and gives in to EU concerns ie. level playing field regulations and allowing EU fishing rights in UK waters /4

But, standing in front of people whose jobs depend on whether such a frictionless trade deal happens between the UK and the EU, Johnson didn’t tell them the whole truth – just what they wanted to hear. And when the young worker asked him to justify his party’s dirty tricks, he pled ignorance.

In short, he’s treating the public like suckers in this election. And that’s the level of respect that people should expect from Johnson in the future if they elect him to government.