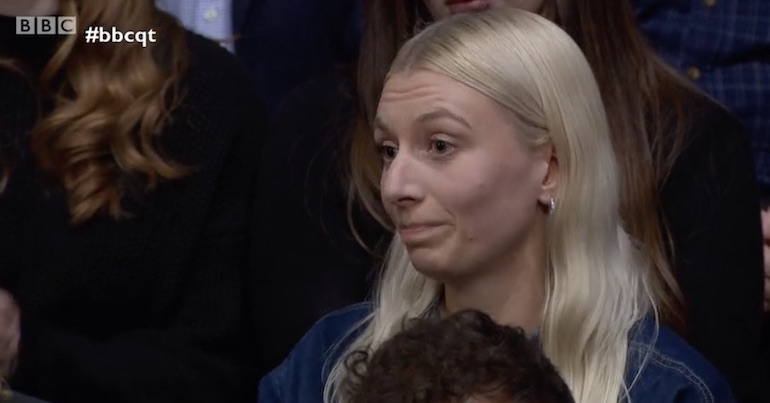 On 9 December, the BBC held an Under 30s Special edition of Question Time. One woman stole the show. She asked the most pertinent question of the night about one of the Tories’ sneakiest and most dangerous manifesto policies.

When the discussion turned to housing, one young woman asked:

Reading the Conservative manifesto, I was very, very shocked and quite appalled to hear your plans to do with Gypsies and Travellers… in terms of removing their homes from both private and public land.

She was referring to a few sentences buried in the manifesto. As The Canary previously reported, this is allegedly part of the Conservative Party’s plan to make “our country safer”. It states:

We will tackle unauthorised traveller camps… give the police new powers to arrest and seize the property and vehicles of trespassers who set up unauthorised encampments, in order to protect our communities… [and] make intentional trespass a criminal offence.

As the woman explained, these new powers impact further on the existing homeless crisis in the UK:

We already have 400,000 people… living in temporary accommodation, or street homeless, or just unregistered homeless – living on sofas… You want to eradicate Gypsies and Travellers, by the sounds of it… but where are you actually planning on putting those people?

But she went even further to really call out the truth about this vile policy saying:

As far as I see it, that’s ethnic cleansing… And it’s the last ‘acceptable’ racism… you pull it out before every single general election because you know that it will be appealing to middle England. And I’ve had enough of it!

So… what’s the answer?

“She just destroyed the Tories”

Robert Jenrick, secretary of state for housing, communities and local government, wasn’t able to give a single, reasonable answer to her question.

Where do travellers go when there’s already a housing crisis and homelessness is rising? The number of hidden homeless people is already almost impossible to calculate. Jenrick also totally ignored the wider threats this part of the manifesto poses to members of the Gypsy, Roma and Traveller (GRT) communities.

If they return to power, the Conservatives plan to give police new powers of arrest, and can immediately seize people’s homes. And as a 2017 report found, this will be against minority groups who already face daily “pervasive prejudice and discrimination”.

People from the travelling community applauded this woman for raising awareness of this “hideous racist plan”:

Ladies & gents I would like to welcome our a new queen. She just destroyed the Tories on their hideous racist plan to criminalise traveling communities on #bbcqt Described manifesto as ethnic cleansing@GypsyTravellers @LondonGypsyTrav @TysonTraveller @CassiPerry4 @RoadsideMum pic.twitter.com/c5LOywqfWf

Lady challenges the Tory on the racist #Pogrom to criminalise #Gypsy #Roma & #Traveller people is a legend. I cannot express how utterly relieved I am to see this vile #EthnicCleansing finally raised on #BBCQT

I don't know her, but if you do, thank her for me, please. ❤️😭💐 pic.twitter.com/AlifFoHkEa

This woman was absolutely right to call this policy “ethnic cleansing”. Because attacks on GRT communities also have a chilling legacy. The Nazis, for example, murdered “up to 500,000 Roma” during the Holocaust. And as far-right populism rises in Europe, so too have “hate crimes and attacks against the continent’s 10-12 million Romani inhabitants”.

When the state tries to increase its powers of repression, GRT communities always pay the price. This part of the manifesto is a chilling reminder of that.

In just a couple of days, we get the chance to vote. Together, we can make sure that the Tories and their vile racist policies are gone for good.