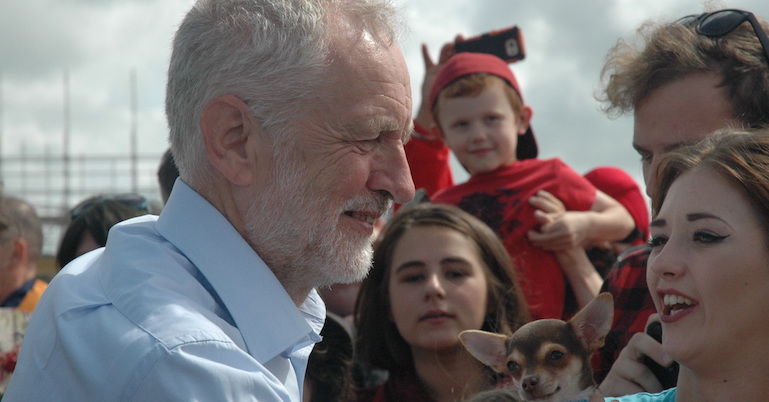 65 comments
Support us and go ad-free

I’m writing this through tears, and know I’m not alone in that today. But as the vultures swoop to pick clean the bones of the election results, it feels important to say one thing:

We may feel shattered, confused and broken today. But you gave us hope. And that’s a hope that the establishment can’t ever crush, no matter how much it wants to.

You showed us a kinder, gentler politics, and stood strong for what is true and right. That’s what they hated you for. But that’s entirely why we stood with you and stand with you still.

My belief in party politics died after the Stop the War march in 2003. I wanted nothing to do with a party led by warmongers. They ignored our voices and took ‘us’ into a war of aggression that killed hundreds of thousands of people, creating a legacy of death and destruction that continues today.

Then, in 2015, you offered change; a new hope. I was one of the millions to whom you gave faith and belief in a new way of politics. It was like nothing we, or the country, had ever experienced. The establishment hated us from the outset; but that was, in some ways, part of the sheer joy – because too many of us had spent years in the margins challenging every aspect of that same establishment we possibly could.

I’m one of the millions who were already entirely disenfranchised at that point. They may talk of the UK’s so-called ‘political refugees’ now under false claims of an antisemitism crisis; but that entirely ignores the fact that, for hundreds and thousands of us, that’s exactly where we were before your leadership. Many of us were highly political, don’t get me wrong, but it certainly didn’t come with a manifesto and a unified, cohesive plan to help millions of people. We just did what we could, when and where we could, in small groups and communities.

While these election results are truly devastating, though, they shouldn’t underestimate us. Because that won’t stop. We know we need that energy more than we ever have before in the cruel, Johnson-led times ahead.

I truly don’t know how you’ve managed to continue with such grace and dignity in the face of continuous and relentless attacks. But I want to thank you from the bottom of my heart. Because your courage in doing so has taught me and so many people I know so, so much.

I don’t think any political leader could be left unscathed by the continual media bombardment you’ve endured over the past four years. Anyone who ‘simply’ says ‘blame Brexit’ or ‘blame you’ for the election results is so wrong. Categorically. We all know that. Because the establishment and its billionaire media lackeys created a perfect storm. It was so vicious and brutal that, although we knew it was blowing, we didn’t see it land until we were right in its eye. Flat calm. Dead calm. Deadly.

And on top of that, equal rage lands straight on those attacking you from within your own party. I’ve felt ashamed to be a Labour member witnessing their despicable actions. As we said about the invasion of Iraq: not in my name. I hope you never ever forget how many of us came to the party and stayed precisely because of your leadership.

Last night, that all leached out on the BBC in a sickening, establishment gloating bloodbath. Every finger pointed by every single ‘commentator’ may appear to be pointing at you and your leadership, but it actually pointed straight back to themselves. Because they set out to destroy you.

But while they may have destroyed that beautiful opportunity to build a government of hope and end the relentless destruction that’s been in play since Margaret Thatcher gained power, what remains will be far, far stronger. We know now that it’s up to us to come together for homeless people, children, pensioners, disabled people, every person ever forced to use a foodbank, people from every visible or invisible minority, and the millions whom austerity dispossessed. We’ll stand strong to save our NHS whatever that takes.

Beyond our shores, we’ll keep that same love and compassion alive for our sisters and brothers in Palestine, Yemen, Rojava, and every single corner of the world that the potential of your government also offered hope to. Johnson’s gang will bloat from arms-deal profits, but we’ll carry on the fight to end that putrid, murderous trade.

And for this beautiful, precious planet, many of us will give our lives if needed. We’ll plant trees, scale buildings and place our bodies in the way of the neoliberal machine to defend, cherish and save it for our children, their children and beyond.

We know the truth, beyond the despicable smears. You’ve committed your life to fight racism, intolerance and injustice wherever you find it. We stand with you, and we won’t stop working for a world where those values triumph.

Perhaps not today. Because we’re hurt; we’re grieving. But we’ve not come this far to ever be stopped.

And we will rise.