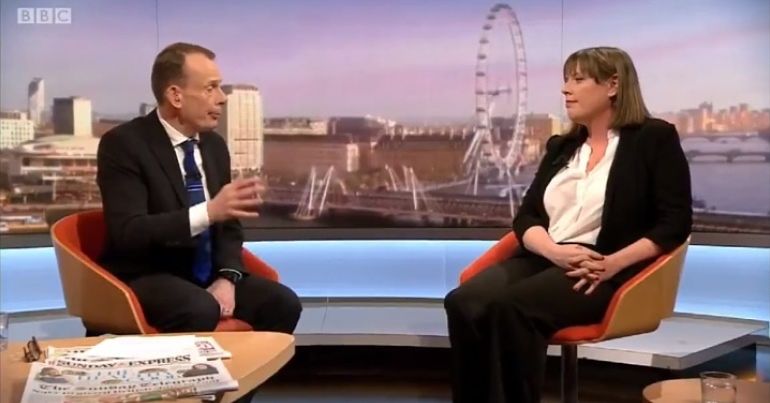 On 5 January, Jess Phillips appeared on the BBC’s Andrew Marr Show to discuss her candidacy for the Labour leadership position. And despite admitting that Brexit was one of the things that contributed to Labour’s loss, she’s still apparently committed to arguing for re-entry to the EU:

“If our country is safer, if it is more economically viable to be in the EU, then I will fight for that regardless of how difficult that argument is to make”

Not only did most UK voters choose to leave the EU in June 2016, but the general election on 12 December 2019 was dominated by Brexit. And it was a landslide victory for a clearly pro-Brexit party. In short, it’s important to a significant number of British people. So it’s unclear why someone who wants to be Labour Party leader and prime minister would apparently argue to re-join the EU.

While introducing the interview, Marr labelled Phillips as “one of the most charismatic MPs in parliament”. But this didn’t cut any ice with people online. One person, for example, thought Phillips’s ‘re-join’ position would “infuriate” people further:

Poor leadership PR qualities from Jess after an election that’s less than a month old that gave the Conservatives a majority of 80? based on Johnson’s ‘get brexit done’; leave voters won’t trust Jess’s labour she will infuriate them further.https://t.co/7ieGk7mDtF

And Labour councillor Seema Chandwani was much more to the point:

This was a car-crash!! 😩 #Marr pic.twitter.com/5FvQFIvkzu

So too was fellow councillor John Edwards:

Catastrophe on day one: Naive, inexperienced and arrogant.
If we want to go to hell in a handcart here’s the driver.https://t.co/wkbv6J64CJ

Time to get real

If Labour is to build a fairer society for the UK, then all leaders need to show they’re listening to its people. So while it’s valid for any candidate to personally believe the best place for the UK is within the EU, they mustn’t let that belief override the wishes of the British people.

Phillips talked about ‘listening’ to the British people. Yet her Brexit position in this interview somewhat belies this. Arguing for Remain when British people chose Leave and punished Labour for not honouring the referendum result in the last election shows a distinct lack of leadership and an unsuitability for public office.