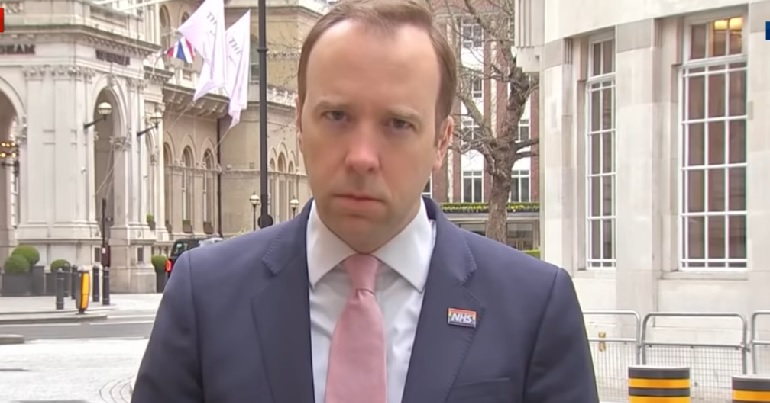 In our flat, we have been living with suspected coronavirus (Covid-19) symptoms for twenty days. Of course, we can’t be tested for it, so like many others in the UK, we can only assume that it is the virus that’s giving us our symptoms.

But according to the NHS, it’s unlikely that I – or my flatmate – have the virus. Like the majority of the public, I initially looked on the NHS’s 111 symptom checker when my flatmate first complained of symptoms. “It feels like I’ve smoked a whole packet of cigarettes,” he’d moaned. “My chest feels really heavy.”

The symptom checker asks the public to answer two questions:

My flatmate and I had neither, so I ticked ‘no’ for both. The NHS told me that “you’re unlikely to have coronavirus.” That was it. In just two questions, I was told that I (and my flatmate) probably didn’t have it. 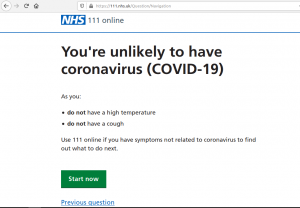 The next day, I developed a sore throat and swollen lymph nodes. Two days after that, I felt an ache around my lung area.

On the night of day five, my flatmate barely slept. The pressure in his chest felt much worse. His symptoms improved significantly over the next few days but deteriorated again on day 10. He had no energy and complained that his chest felt even heavier. On day 11, he developed a very sore throat on top of his other symptoms. There are a number of reports that people often improve and then deteriorate.

My flatmate improved significantly between days 12 and 18, although the pressure in his chest remained. But on day 19, he felt terrible again, with more symptoms: shortness of breath, dizzy spells and fatigue.

As for me, the ache around my lung area initially faded to nothing – but has recurred again over the last couple of days.

We know through social media that the virus affects each individual differently. So why does the NHS website only ask people if they have a persistent cough and a fever?

The World Health Organisation (WHO) has a more comprehensive symptom list:

And let’s look at other countries’ coronavirus advice. The Australian government describes symptoms as being a fever, cough, shortness of breath, and a sore throat. It goes on to list severe symptoms as:

The website tells you to go to the Emergency Department if you have severe symptoms. So if we were in Australia, my flatmate would have been taken to hospital. 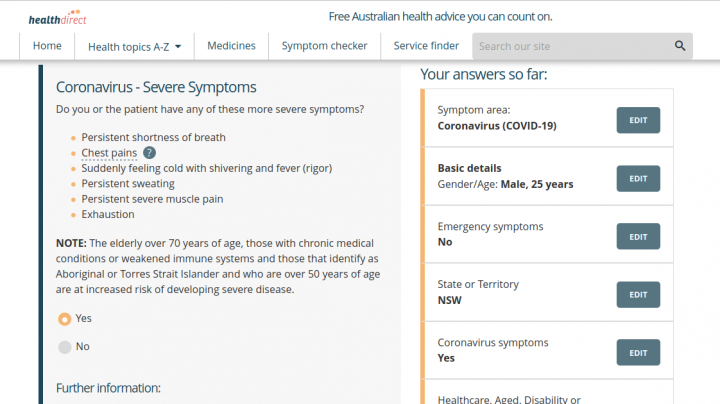 Even the US Centers for Disease Control and Prevention (CDC) advice is more comprehensive than the NHS’s. First, it lists “a fever, cough and shortness of breath”. It goes on to list emergency symptoms, and states that you should seek immediate medical attention if you have:

Once again, if we lived in the US, I would be taking my flatmate to get urgent medical advice.

On day 19, I called the NHS’s 111 advice line. I quickly managed to speak to someone, but only after I had stated that yes, my friend did have a fever or persistent cough. The kind person on the other end of the line was much more thorough than the NHS website.

Before the government declared the lockdown, I’m sure that many people like me checked their symptoms against the NHS advice. When not finding their symptoms, they may well have unknowingly gone to public places and spread the virus. And now, during lockdown, others with symptoms that don’t include fever or cough may be caring for vulnerable people.

Protecting the economy at all costs

The NHS told The Canary that “public advice over symptoms [comes] from Public Health England so they would be best placed to answer your questions.” The Canary contacted Public Health England, but had received no comment by the time of publication. Why would this government agency deliberately downplay the symptoms? Is it because it wants to continue capitalism as usual for as many ‘essential’ businesses as possible? The Canary has already reported that arms companies are still producing weapons right now.

The government has proved itself to be reckless and incompetent throughout this crisis. Even its dubious advice on how long to quarantine for is at odds with the WHO, which has stated:

“People infected with Covid-19 can still infect others after they stop feeling sick, so these measures should continue for at least two weeks after symptoms disappear.“

Only a week after being diagnosed with coronavirus, health secretary Matt Hancock went back to work, opening the new Nightingale hospital.

To keep the economy running, you need workers. And to keep workers, the government may be both withholding information on potential symptoms and flouting WHO guidelines on how long to quarantine for.