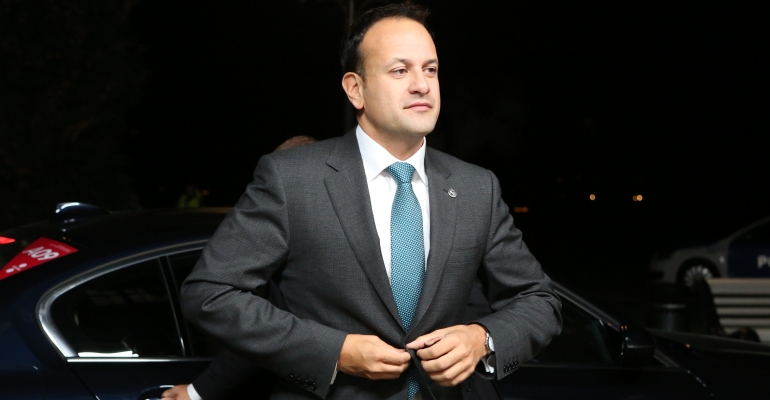 When Black Lives Matter protests extended to the UK, protesters tore down a statue of a notorious slave trader in Bristol while another statue was removed in London. So on 10 June, taoiseach (Irish prime minister) Leo Varadkar singled out a statue in Dublin of Irish republican Sean Russell that “we might need to think about”. Varadkar labelled Russell “a bit of a Nazi collaborator”. He made his comment on Irish radio station 2FM in response to the presenter’s quip:

Now might be a nice time to pen a letter to Boris and say any statues of Cromwell in the UK can go. I think we’ve got the momentum taoiseach to make it happen.

Yeah well we’ve a few of our own statues now we might need to think about. There’s a statue in Fairview Park of an Irish Republican who was also a bit of a Nazi collaborator.

In doing so, Varadkar attempted to put Russell in the same sleazy company as slave traders. He attempted to sully the name of someone who in fact wasn’t “a bit of a Nazi collaborator” but who actually fought British imperialism. And it can only have been in a pathetic attempt to distract from his own party’s record on racism in Ireland.

Racism and direct provision in Ireland

Earlier in the interview, the presenter asked Varadkar if Ireland had a “racism problem”. He responded “I think we do…thankfully we don’t have the kind of problems of police brutality that they have in the United States”.

Ireland might not have the same policing problem as the US, but it has other problems with racism. The Irish government introduced direct provision (DP) in Ireland in 2000. And since taking office in 2011, Varadkar’s party Fine Gael (FG) has presided over this system. DP is the system of housing people in Ireland while they seek asylum. The Irish Refugee Council (IRC) has criticised DP because of the conditions under which people live, the lack of services and support for people living there, and the length of time people must stay there before their case is heard.

More recently, because of coronavirus (Covid-19), concerns have been raised about the inability to socially distance in such cramped conditions.

So the IRC put forward an alternative. Firstly, it believes responsibility must be taken away from the Department of Justice as it doesn’t have the expertise to deal with housing. To counter this, the IRC says:

Housing experts should be consulted and sought for input.

The IRC wants the government to give greater thought and more time to housing because at present, “providers are required to provide accommodation at short notice, which puts off bodies that may require time to convert properties”. It’s also demanding accommodation that’s “fit-for-purpose” where there is “adequate living space” and residents have “own-door accommodation and self-catering facilities to ensure autonomy, privacy and dignity” as a necessity.

Furthermore, the IRC wants a faster process of seeking asylum, as currently applicants can wait “at least 12 months before being called for an asylum interview”. But the Irish government still insists there’s no alternative as minister David Stanton said he has yet to hear “anyone say what they would replace it with”.

People living there have highlighted how DP contributes to racism. Owodunni Ola Mustapha, who’s been living in DP for six years, has shared her experience in DP. Mustapha said:

Permit me to begin on the topic of racism by saying that segregating people from mainstream society and abdicating the affairs of their lives to DP centre managers for profit is at its core a form of institutional racism and a recipe for disaster.

Other people living in DP have complained about the damp conditions in which they live and the restrictions that forbid them from inviting friends to visit. But Varadkar doesn’t accept this, as he said said “Does it [DP] add to racism or not? I hope it doesn’t.” He added:

Direct Provision ultimately is a service offered by the State, it is not compulsory and it is not a form of detention, it is a service provided for by the state and they are provided with free accommodation, food, heat, light, healthcare and education and also some spending money.

Leo Varadkar and FG’s past

In that radio interview, while Varadkar brought up the past of Irish republicans, he neglected to bring up the past of his own party. Sean Russell died in 1940. So why not go back a little further to the founding of FG in 1933. Three political groups amalgamated to form FG. One of which was the National Guard, or as it is better known, the Blueshirts.

The Blueshirts were an Irish fascist party in the 1930s. They opposed Irish republicanism and ended their days fighting for Franco during the Spanish civil war. But it’s still a time that one FG councillor has expressed “love” for. And other members of the party, in the not too distant past, reportedly had “a strong nostalgia for it”.

When the radio interviewer asked Varadkar if he’d “pen a letter to Boris” about the removal of the statue of Oliver Cromwell in Westminster, it would’ve been the perfect opportunity to speak up for the removal of a statue of an Irish republican who actually did support slavery. In Newry in the north of Ireland, there’s a statue to Irish republican John Mitchel. While Mitchel wasn’t a slave trader, he was a pro-slavery advocate. Yet Varadkar had nothing to say on that in this interview.

Irish Republicans have a proud history of fighting racism, such as standing with the Irish Anti Apartheid Movement (IAAM). In fact one of Varadkar’s predecessors (taoiseach Garret Fitzgerald) resigned from the IAAM when Irish republican party Sinn Féin joined it. Fitzgerald was leader of FG from 1977 until 1987.

At the time there was an embargo on Irish government officials meeting with representatives of Sinn Féin because of its association with the IRA. The conflict between British forces and the IRA in the north of Ireland was raging at that time. Fitzgerald therefore gave that embargo greater importance than human rights in South Africa.

In order to be a ‘Nazi collaborator’ you would have to collaborate with the Nazis. There’s no evidence that Russell did this. Russell remained committed to the IRA after the partition of Ireland and went on to become its chief of staff. And in doing so, he travelled to the US, the Soviet Union, and Germany to secure finance and weapons for the IRA. But in his own words:

I am not a Nazi.  I am not even pro German.  I am an Irishman fighting for the independence of Ireland.  If it suits Germany to give us help to achieve independence, I am willing to accept it, but no more, and there must be no strings to the help.

And if the Nazis were such great friends of Irish republicans, it’s curious that they bombed the neutral south of Ireland several times during the second world war. In fact, on 31 May 1941, just 1km from where Russell’s statue stands today, German bombs killed 34 people.

Statues of any supporters of slavery or racism must be torn down immediately. But it’s not just a matter of taking them out of sight. We must never forget the horror of slavery, nor how it funded capitalism.

Varadkar’s comments about Russell are not only wrong, they confuse the debate. Instead of opening a proper discussion on racism in Ireland, the brutality of Oliver Cromwell, and the connections between slavery and capitalism, Varadkar opted for a cheap dig. We need and expect leadership from our leaders, not shoddy opportunism.