As people continue to take to the streets, knowing your rights is more important than ever - Canary 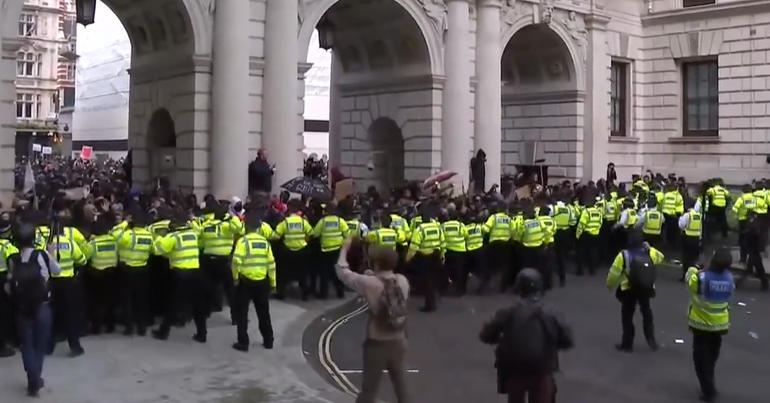 Last week’s Black Lives Matter (BLM) protests saw the police in London acting heavy-handedly, charging on police horses at people and ignoring laws. As the BLM movement grows and new people get involved, it’s important that protesters know their rights when they take to the streets.

The Metropolitan police love to kettle protesters, surrounding them on all sides and preventing them from leaving an area. It’s one of their favourite tactics, and it’s been used against all recent mass movements, from students to anti-fascists.

In 2012, the Met kettled and mass-arrested 182 cyclists who were protesting the London Olympics. And in 2013, the police did the same to 286 anti-fascist protesters, leaving them without access to toilets, food and water for hours. In 2019, the Met was forced to pay the anti-fascists a total of £700,000 in compensation.

What are ‘Mengesha rights’?

The Met is, of course, using the same kettling tactics against BLM protesters. On 7 June, police only allowed protesters to leave the kettle in ones and twos. People were forced to remove their face masks so that police officers could film their faces. They were also told to give their names and addresses under section 50 of the Police Reform Act. The Network for Police Monitoring (Netpol), stated:

We also had reports that officers were saying that “Mengesha rights do not apply tonight”. This is a reference to a High Court ruling in 2013 that police powers to prevent a breach of the peace cannot be used for other purposes such as intelligence gathering.

The Canary spoke to Susannah Mengesha, who took a claim against the police when they used exactly the same tactics on her in 2013. She explained:

Whilst attending a trade union demonstration seven years ago as a legal observer, I ended up in part of the protest that was kettled by police. The police would only release people from the containment if they submitted to being individually filmed and gave their name and address. When asked what police power they were using, at the time they cited section 50 of the Police Reform Act, though they later denied it in court. I subsequently pursued a claim in public law against the police. The High Court upheld my claim and confirmed that the police must not demand people’s name and address, or that they submit to being individually filmed, as the price for leaving a kettle.

So, by demanding that protesters give their names and addresses, the police were effectively breaking the law.

The Canary contacted the Metropolitan police to ask why ‘Mengesha rights’ didn’t apply to BLM protesters. We were told:

The priority for officers was to disperse the large group. While individuals may have been asked for their details, if officers believed they were prepared to move on after engaging with them, they were left to do so with no further action.

Section 50 of the Police Reform Act cannot be applied to an area/event, it is however a power available to individual officers should they believe an individual has been involved in anti-social behaviour.

While this may have been used in isolated incidents, this power was not used as a condition of release from the cordon.

On the night of 7 June, Green and Black Cross legal observers reported that those who refused to give the police personal information were finally released from the kettle at 2am, without being arrested. GBC stated:

The kettle is over. Those that refused to give their details to the cops were let go. Big up the LOs [legal observers] on the ground who informed people of their rights and gave them the confidence to resist police bullying.

So knowing your rights is vital when you’re facing the police. Netpol and GBC have summarised the key points to remember when going on a protest:

1. No comment. You don’t have to talk to the police on the streets, if there’s a Stop and Search, or if you are arrested. Best to stay silent or reply with ‘no comment’. If arrested, say ‘no comment’ in interview until you talk to a good lawyer.

3. Under what power? If police ask you to do something, ask them if you are legally obliged to answer, and ‘under what power?’ If you aren’t obliged or they don’t answer, you don’t have to do it.

4. No Duty Solicitor. If arrested, do not use the solicitor on duty but get a lawyer experienced in protest law [see Netpol’s list of solicitors here].

5. No caution. Police often try to get people to accept a caution, which goes on criminal records. We recommend not accepting one unless a good lawyer recommends it. If you’re offered one, it’s because the police want you to take it – they are not doing you a favour.

But what about Coronavirus Law?

The Canary’s Emily Apple previously reported on the new Coronavirus Law. She stated that it’s still not an obligation to hand over personal details. She explained that:

In fact, there are no new police powers regarding handing over personal information. The only time this is required is if you’re “driving or if they have reason to believe that you have engaged in anti-social behaviour in a public place (which means causing people harassment, alarm, or distress)”. Additionally, if the police want to issue a fixed penalty notice then refusing to give your name and address could lead to arrest.

Mengesha is under no illusions that the police will act correctly, even if you know your rights. She told The Canary:

The behaviour by police towards BLM activists sends a deeply chilling message that all bets are now off – any pretence at civil liberties or human rights is indefinitely suspended… In any case, it often seems that the police just do what they want, regardless of the letter of the law, because they know that in most cases they will get away with it… They operate largely unaccountably and with the full protection of the state behind them. What is needed is not just excuses, individual scapegoats or handwringing promises to do better. It is lasting systemic and social change.

Knowing your rights on a protest is crucial, and puts you in a more powerful position. But that doesn’t mean that the police will always respect these rights – especially if you’re Black.