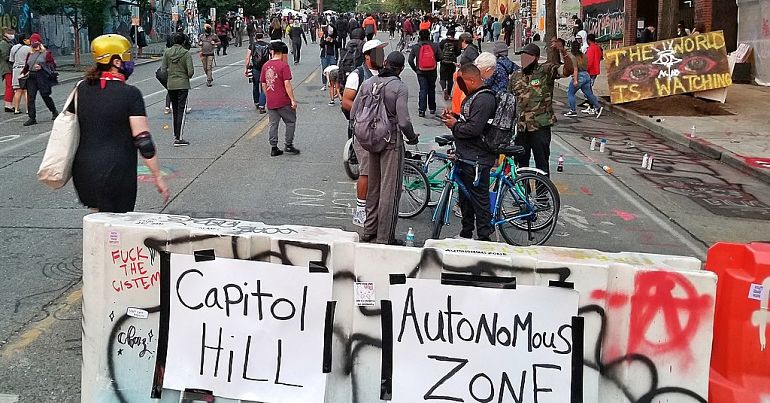 US president Donald Trump has threatened to crush what he calls “ugly Anarchists”, who recently declared the inner Seattle suburb of Capitol Hill an “autonomous zone”, now known as CHAZ.

On the other side of the Atlantic, Britain’s Channel 4 News has exposed a video platform that allows the far-right to openly express their hate-filled views. On exploring that platform The Canary found several videos attacking CHAZ and spreading disinformation.

Trump’s message to CHAZ was via his usual method of communication – a tweet. He described the local people of Capitol Hill as “ugly Anarchists”. He further admonished the city’s mayor and Washington state’s governor, saying if they do not take back CHAZ, then he will.

Radical Left Governor @JayInslee and the Mayor of Seattle are being taunted and played at a level that our great Country has never seen before. Take back your city NOW. If you don’t do it, I will. This is not a game. These ugly Anarchists must be stopped IMMEDIATELY. MOVE FAST!

A threat that’s hardly unexpected from a man whose reactionary views are diametrically opposed to the locals of CHAZ.

However, BitChute told The Canary that it doesn’t “host National Action terrorist content”. It further stated:

we remove terrorist content. It’s possible just like Facebook/Twitter/YouTube and all other sites that it can go unnoticed for a time, but once we are aware we remove it and it is stated in our terms that we will not tolerate any terrorist content or incitement to violence We are pro freedom of expression, but this does not include illegal content and never has done.

On examining BitChute, The Canary discovered a number of videos attacking CHAZ and churning out disinformation.

One such video claims that CHAZ has been taken over by Antifa (anti-fascists) and that the area is now run by “gangs and warlords”. It goes on to describe Antifa as “spreaders of terror”. The video then quotes from a series of demands issued by Collective Black Voices (CBV), which is just one group involved in CHAZ.

Next, the video claims that a Hispanic man driving in the area during the protests was “attacked by a leftist mob”. However, in the intro section of another anti-CHAZ video, that version of what happened is challenged, showing how the Hispanic man drove into the protesters and fired a gun (the same video goes on to refer to the CBV demands as “retarded”). Another report asserts that: “a driver veered toward the protest, was chased, and brandished a firearm. The victim reportedly was trying to disarm the man when he was shot”. This is a video of the incident:

A later report stated that the man who it was claimed drove into the crowd had been charged:

King County prosecutors have charged Nikolas Fernandez, 31, of Seattle, with first-degree assault, accusing him of driving at a crowd of protesters on Capitol Hill and shooting a 27-year-old man who attempted to stop him. https://t.co/BFX9bhnSQE

So what’s the reality of CHAZ? On the first evening after declaring the autonomous zone, CHAZ locals were out enjoying a movie:

And according to this tweeter, this is what daily life looks like in the zone now:

Took a visit to the Capitol Hill Autonomous Zone #CHAZ

1. No, idiot, no one was asking to see ID upon entry
2. Free food and drinks, bathrooms, sanitation, tents, and medical services provided by volunteers
3. Sign up for Night Watch
4. Local businesses are open (and thriving) pic.twitter.com/ImMStifdYf

The video commentaries hosted by BitChute, as well as the Trump narrative, contrasts sharply with the images and comments from those on the ground.

And here’s some myth-busting:

Not an easy task

Over the coming days or weeks, those who live and work in the zone will undoubtedly disagree as to what should happen next. Reaching a consensus won’t be an easy task.

But there are many examples, small scale and large, from around the world where similar initiatives (not forgetting the Zapatistas) have been tried and tested. Learning from not just their successes, but also their failures, is essential.

Meanwhile, Trump and his far-right allies can go to hell.