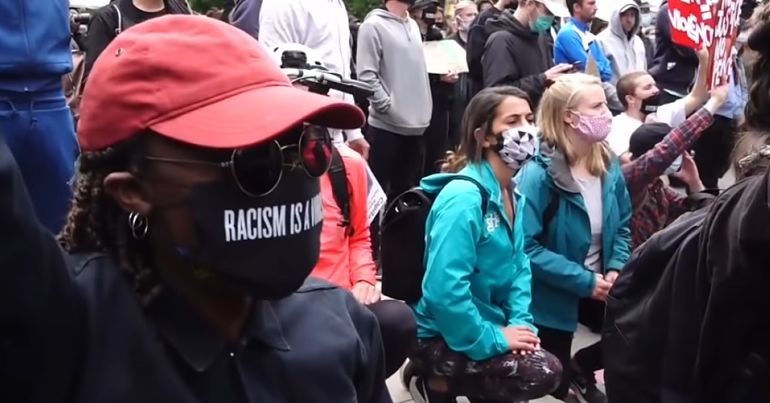 Following the killing of George Floyd in the US on 25 May, Black Lives Matter protests have exploded around the world. The UK is among the countries where demonstrations have taken place.

Of late though, certain images of the protests have circulated that allegedly show violence by protesters against the police. Given the demonstrations are in response to an instance of excessive violence by police against citizens (one of many), and the systemic racism that gives rise to such brutality, that’s quite the turn around. Black people and their allies aren’t the victims of violence, they’re the perpetrators of it, or so the messaging goes.

That argument, however, has just been royally and expertly rumbled.

The images that people circulated on social media show bloodied and distraught police officers in the apparent aftermath of an attack:

However, fact-checking site Full Fact dug into the pictures. It noted that people attributed the pictures to the recent Black Lives Matter protests, but found that:

This is not true. Three of the images are from last weekend’s protests, the others are from protests in the UK dating back to 2016.

According to Full Fact, two of the images were from far-right protests. One was for Stephen Yaxley-Lennon, aka Tommy Robinson, in 2018. The other happened in Liverpool in 2016. A further image featured in the collection came from an anti-David Cameron protest, again in 2016. That year news that the then PM had previously held shares in an offshore trust had emerged, which led to calls for his resignation.

The three remaining images were all from the recent Black Lives Matter protests, Full Fact said, but two were of the same officer. However, it’s also worth noting that the two images of the same officer were taken after her horse bolted. As The Canary previously reported:

an officer fell from her horse after riding into a traffic light, the animal ran on to the street in Whitehall, knocking down nursing student Jessie Tieti Mawutu in an incident which she said left her “traumatised”.

This is a bogus attempt to smear the Black Lives Matter protesters. In reality, the global protests have seen their share of violence. But, by far, that’s been meted out by the police. Meanwhile, the protests have been largely peaceful. Indeed, some truly moving moments have been captured during them:

All this demonisation of protesters serves to do is stoke division, and provide a useful narrative for further oppression. In the UK, for example, the government has already drawn up plans to fast-track the jailing of ‘violent’ Black Lives Matter protesters:

Under plans drawn up by the Home Secretary and the Justice Secretary, protesters who cause vandalism or criminal damage will be jailed within 24 hours of being arrested. pic.twitter.com/PxFDgAQxmX

Lies and demonisation. Officials plotting to respond to protests against racism by speeding up their ability to lock up Black people and their allies. Clearly in the fight against racism, the UK, as elsewhere, has a long way to go.