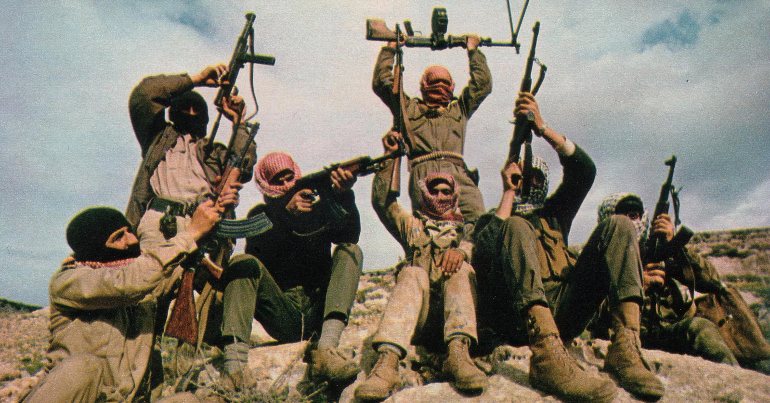 The West’s credibility when it comes to labeling others as ‘terrorists’ has always been highly suspect. Not least because Western nations have aided and abetted plenty of paramilitary groups of which they approve. And they’ve even been involved in the commission of state terror. Now, a furore over funding for a Palestinian political party has highlighted this absurdity once again.

On 10 June, Conservative Party MP Andrew Percy asked a question during Prime Minister’s Question Time about whether a “proscribed terrorist organization” has received funds from the UK. Percy, a member of the Conservative Friends of Israel known for his particularly fawning treatment of the Zionist state, claimed that an investigation has found that the Popular Front for the Liberation of Palestine (PFLP, which in a Pythonesque slip of the tongue he erroneously referred to as the “People’s Front for the Liberation of Palestine”) has received money from international organizations such as the World Health Organization (WHO). He said:

Can the minister assure me that no UK aid money has been channeled in that way?

Minister of State for the Middle East and North Africa James Cleverly answered as the relevant minister. He responded evasively that the UK government “maintain[s] robust measures to ensure that aid is not diverted”.

The comments come on the back of increasing scrutiny of a letter sent by the head of the European Union’s (EU) representative to the West Bank and Gaza, Sven Kuehn von Burgsdorff. The letter discussed EU funding of Palestinian NGOs (though it’s unclear whether this specifically prompted Percy’s question). It said that these 135 NGOs can apply for EU funding even if they have links to EU-designated ‘terrorist’ organizations.

The German diplomat has come under particular fire for “using technicalities” to ‘skirt’ the restrictions, as one right-wing Israel newspaper put it. The European Jewish Press, meanwhile, said that the letter “means that despite an anti-terror clause in EU funded contracts, these funds are being abused by those who support and endorse terrorism”.

Percy is technically correct that the PFLP is a “proscribed terrorist organization” – it’s been designated as such by the US State Department, whose lead the US’s European allies often follow on such matters. But the insinuations contained within his question were nonetheless completely misleading. Because labeling the PFLP as a terrorist organization is as ridiculous as it is hypocritical.

For one thing, the PFLP is a political party that holds seats in the Palestinian Legislative Council (PLC). In fact, it’s a member of, and second-largest faction within, the Palestinian Liberation Organization (PLO), which is internationally recognized as the ‘sole legitimate representative of the Palestinian people’. The PFLP even sits with the PLO opposition in the PLC, which the US currently favors given that the ‘Islamist’ group Hamas is currently in the majority.

Although the PFLP has an armed wing, the Abu Ali Mustafa Brigades, so does Fatah, its main rival within the PLO. But whereas the US and its allies make a distinction by designating Fatah’s al-Aqsa Martyrs’ Brigades a terrorist organization, but not Fatah itself, it nonetheless tars both the PFLP and its armed wing with the same brush. The reality is that the Abu Ali Mustafa Brigades and the al-Aqsa Martyrs’ Brigades have both been involved in armed actions in recent decades. During the Second Intifada, the latter played a decisive role in the uprising against the Zionist occupation of the West Bank and Gaza.

One can only speculate, but it seems to be not entirely a coincidence that whereas Fatah has morphed over the years into a collaborationist administrator of the US-sponsored status quo and taken the path of engagement with Israel, the PFLP takes a more hardline position. For instance, it rejects negotiations and opposes the US-Israeli version of the two-state solution model. (Although its position on the two-state vs. one-state solution is more nuanced than usually characterized.)

And behind all this lies even greater hypocrisy. Because the US and its allies have backed some of the most ruthless paramilitary organizations in the world when it’s served their interests. This includes the right-wing ‘Contra’ force in Central America that waged a campaign of violence against the government of Nicaragua, as well as a brutal dirty war against leftists and perceived enemies.

Moreover, the US and its allies have themselves committed countless acts that fall within the definition of ‘state terror’. Noam Chomsky has argued that the US, in particular, is “the world’s leading terrorist state, and proud of it”. And, of course, Israel commits acts of state terror against Palestinians, including killing children, on a routine basis with almost complete impunity.

It’s also worth noting that the term ‘terrorist’ has become highly politicized and distorted by the US and its allies for their own propaganda purposes. As the PFLP’s leader Ahmad Sa’adat (who, according to Amnesty International, is being held illegally in an Israeli jail on bogus charges), puts it:

It is not surprising that the United States and the European Union have put the PFLP on their lists of terrorist organizations: it serves to brand the whole Palestinian resistance as terrorists. It is part and parcel of the American policy to impose its hegemony on the rest of the world…

The PFLP is a legal Palestinian party that aims to liberate the people from the occupation.

Finally, we should remember that the Palestinian people are, in fact, perfectly entitled to engage in armed resistance against the violent foreign occupation of their country. And this is both a moral and a legal right under international law, since the ‘Additional Protocol I to the Geneva Conventions’ enshrines wars of national liberation as an essential protected right for all people living under occupation.

Clearly, Percy’s comments are just one more pathetic attempt to uphold the absurd notion that the West’s imperialist crimes are legitimate, while the slightest attempt to resist them is somehow illegitimate. As the old saying coined by British writer Gerald Seymour goes, “One man’s terrorist is another man’s freedom fighter”.